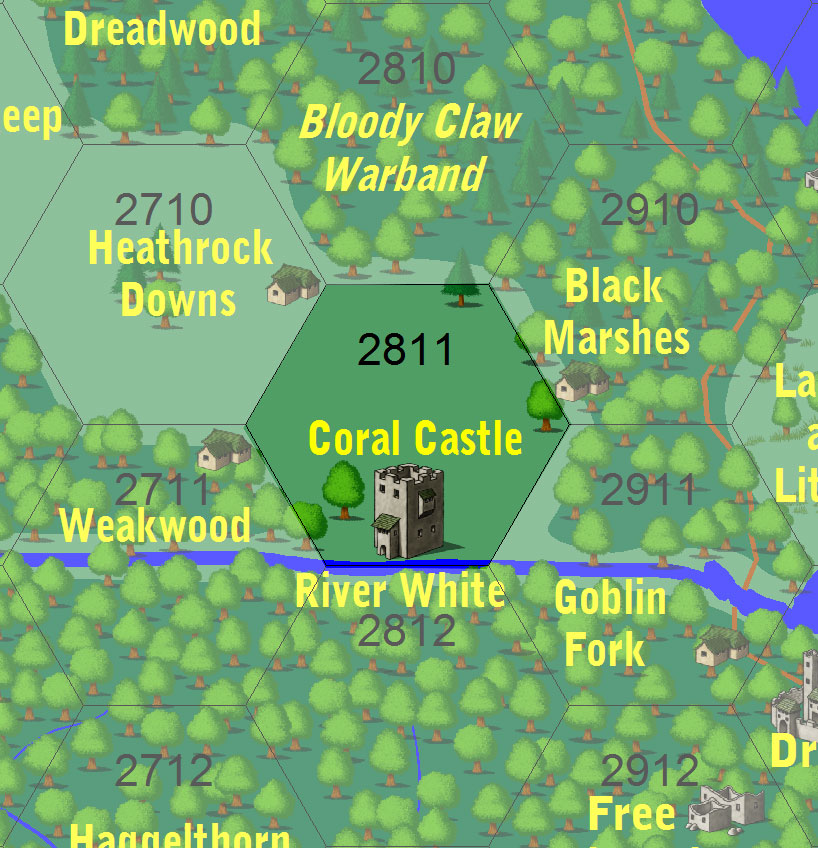 Coral Castle is perched on an outjutting of land and protected with a high wall designed to keep the orcs out. There are no towns associated with the castle proper. The only contact that the Coral Castle has with the Eastern Reaches is an occasional foray by boat to Dragonsford where the soldiers trade the valuable coral (found easily along the shore near the castle) for food, supplies, and drink. The current commander is Willem Aldridge.

History of the Coral Castle

The castle fell into neglect in the mid eighth century TA after the founding of Dragonsford Castle in 702 TA.

In 883 TA, the castle was claimed by "Baron" Aldridge, who gave himself the titles Commander of the Coral Castle, Lord of Heathrock Downs, Black Marshes, and Weakwood. At that time, the keep was a pile of broken towers and walls with the central keep as the only functional building in the compound. The Baron's "army" was a ragtag collection old men and young boys. Baron Aldridge called upon an adventuring party to help with some orcs who attacked the nearby village of Heathrock Downs.

The castle was partially rebuilt in 888 TA as part of re-building after the orc rebellions following the Dwarven Lightning offensive of 887 TA. Aldridge has retained command of the keep, although his title of "Baron" is not recognized by the throne.

The River White is the swiftly flowing river which defines the northern boarder of the Eastern Reaches. It runs from the Shadowyarn Mountains east to the Inner Sea just north of Dragonsford. Originally called the River Wight to distinguish it from the river flowing west from the Shadowyarn Mountains to Teufeldorf, the name has been changed to the River White. For most of its length, the river is too wide and swift to allow large armies to pass over it. For this reason, it has proven to be the natural dividing line between the orcs to the north and the humans to the south.