Foray Into the Tower of Skaldor the Mutator 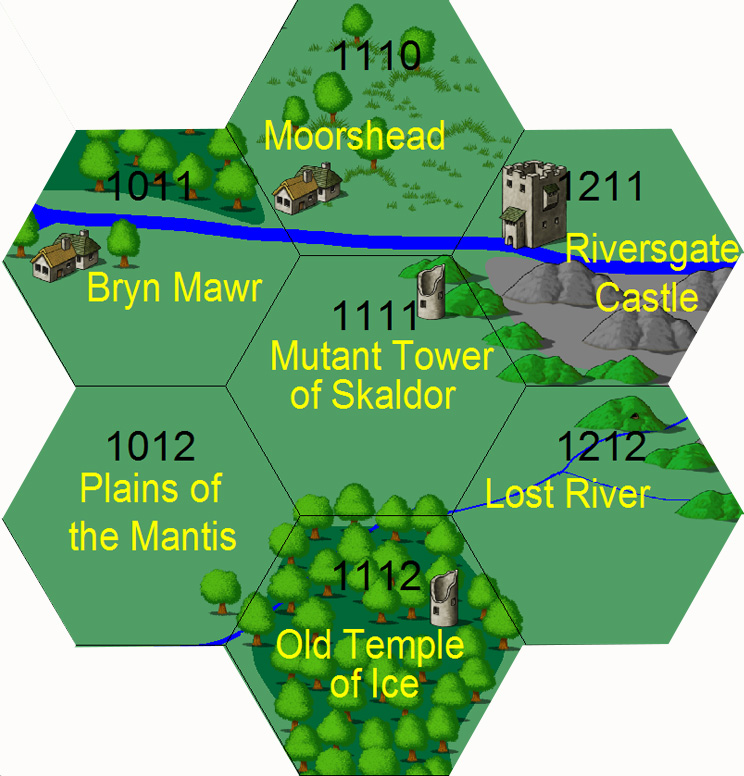 In which the party entered the tower of Skaldor the Mutator, in a small woods just a few miles from Teufeldorf....

After safely returning from the Tomb of the Zombie Lord, the party rested for several weeks. But, their wounds having been light and superficial, these brave adventurers soon began to get restless for action. There was talk about returning to the Tomb to try again, but knowing that the priests would be on the alert this time, the party decided against the plan.

However, sitting in the pub in Teufeldorf, our adventurers heard of a new treasure to be had. A young bard was telling of the Legend of Mygan the White Magician, a wizard of Teufeldorf who had lived in the woods just outside of the city. After the song, the young bard was asked what had become of Mygan. "Dead he is, killed by the Sorcerer Skaldor, the one who changes things," was the reply. Hearing this, The Party questioned the young man about the recent events surrounding Mygan. They learned that Mygan had built a modest tower a few miles to the east of Teufeldorf. However, Skaldor the Mutator had come from lands unknown, taken over the citadel, and killed Mygan. "Skaldor wields the Staff of Mutation and casts great spells. Being an evil mage, Skaldor has bent the staff's purpose towards destruction. Nobody goes near that Tower any more," the bard warned. Nobody, that is, except the party.

The party set out in great haste to The Citadel of Mygan the White Magician now known as The Citadel of Skaldor the Mutator. They were in search of a Staff of Power, the Staff of Mutation. A log book was never kept, and the adventurers had little time to draw accurate maps. What little that remains from this adventure is preserved here.

A Guide to the Vampire Gardens of Skaldor (as gathered from party notes, maps, and legends) 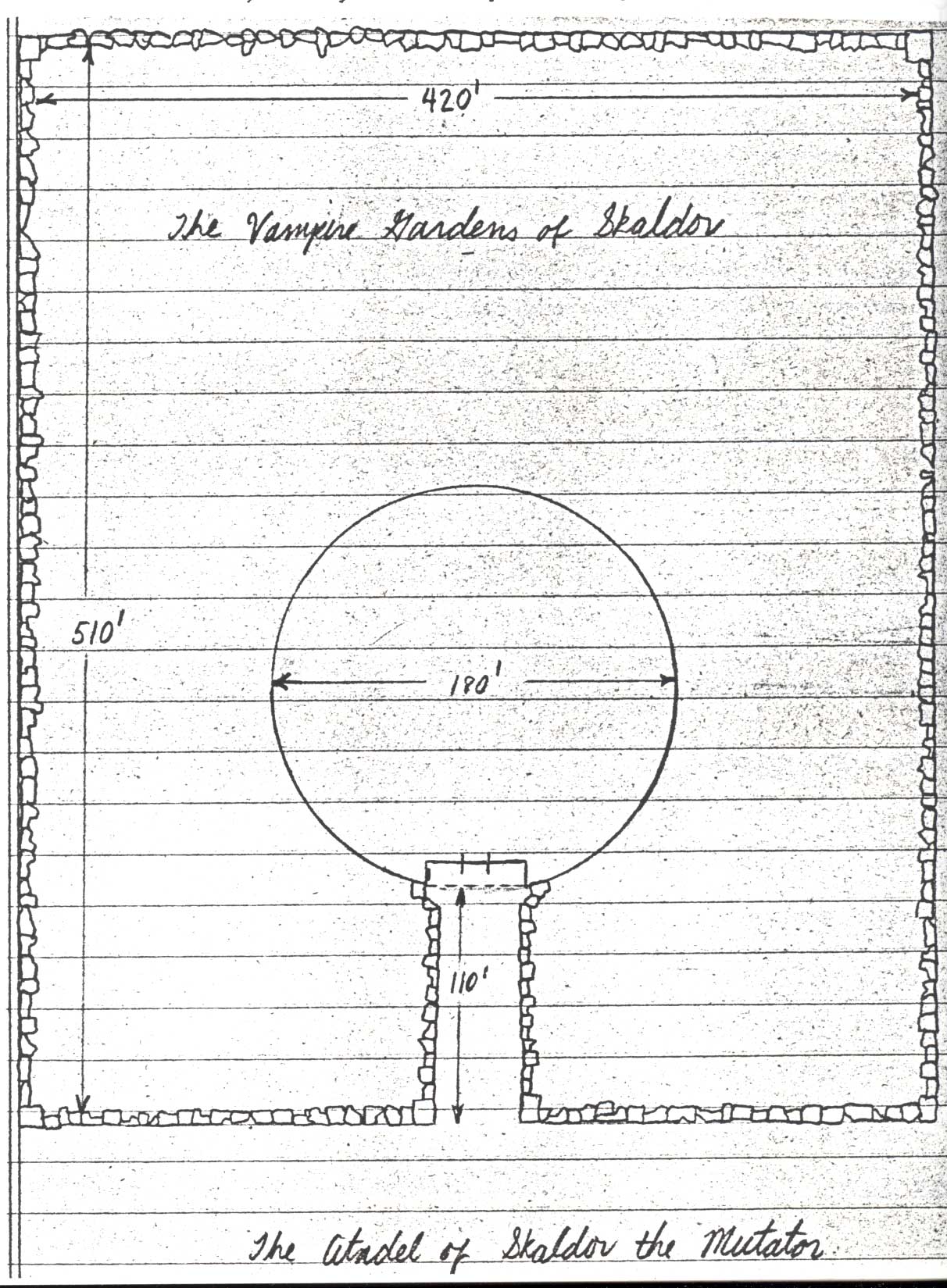 The Party made several notes on the gardens surrounding the Citadel. Thinking that there might be a secret entrance in the rear of the tower, the party jumped over the high stone wall that surrounded the area. There they encountered a jungle of very nasty man-eating vampire plants and several mutated zombies. Discovering that Skaldor was using the garden as a refuge for his misfits and failed experiments, the party retreated back over the fence.

A Guide to the Citadel of Skaldor the Mutator (as gathered from party notes, maps, and legends)

Citadel of Skaldor the Mutator - Levels 1 and 2

Level One: The entrance to the lowest level of the tower was guarded by some Grey Ooze. Avoiding this, The Party was able to sneak into the tower unnoticed. Exploring several rooms on the ground floor, the party discovered little of interest. The rooms were for the most part abandoned.

Finding some stairs, our adventurers began to climb....

Stairs Up: Halfway up the stairs, the party came onto a landing and there searched for secret doors. Finding a set of cleverly hidden doors, they opened them. This was to prove to be a big mistake. The door was rigged to spring a pit and sound an alarm. At the bottom of the pit, the party had to fight another of Skaldor's mutations. Quickly defeating the beast, the party searched for a way out. Finding a locked door, the party broke it open and charged out just to discover that they were on the ground floor again. Heedless of their damage, the party raced up the stairs, jumped the pit, and flew through the doors that they had previously found....

Level Two: This proved to be a menagerie of Skaldor's monsters. The rooms that Mygan had made for guests were being used as cages to hold Skaldor's misfits. Quickly searching the area, The Party wasted no time in finding another secret door and more stairs leading upward....

Citadel of Skaldor the Mutator - Levels 3 and 4

Level Three: The Laboratory of Skaldor took up the entire third level of the Tower. Guarded by several owlbears (who were now alerted) and another pit (skillfully avoided), this level of the tower proved to be the most difficult. The party literally stumbled into the waiting owlbears, and it is rumored that several adventurers were squeezed to death here.

Fleeing from the the owlbears, the party limped into the main chamber of the Laboratory only to be greeted by several lesser evil magicians. Dispatching these, the party quickly searched for treasure. Among the vials and bottles, plants and herbs, and other scientific devices, one of our adventurers found a metal case marked with an orange symbol. Thinking it to be a chest of loot, the case was opened and the chamber flooded with radiation. Several party members became violently sick and weak. Severely limited in their fighting ability, the party fled the chamber and the Citadel.

They never journeyed to the fourth and highest level. There, Skaldor the Mutator lie sleeping with the Staff of Mutation resting against the wall nearby. The Staff was not won that day by the party.

In September 819 TA, an adventuring group consisting of Spanky the Ranger, Minion the Thief, Turgon the Devious, Manfred Manchester (later Manfred Manchester the Elder), Morgan the Enchanter, Tuatha De Danaan, and Shea the Fighter was successful in recovering the staff. It is known that a mysterious wizard in Teufeldorf known as Turgon the Devious now wields the Staff of Mutation for the powers of good.