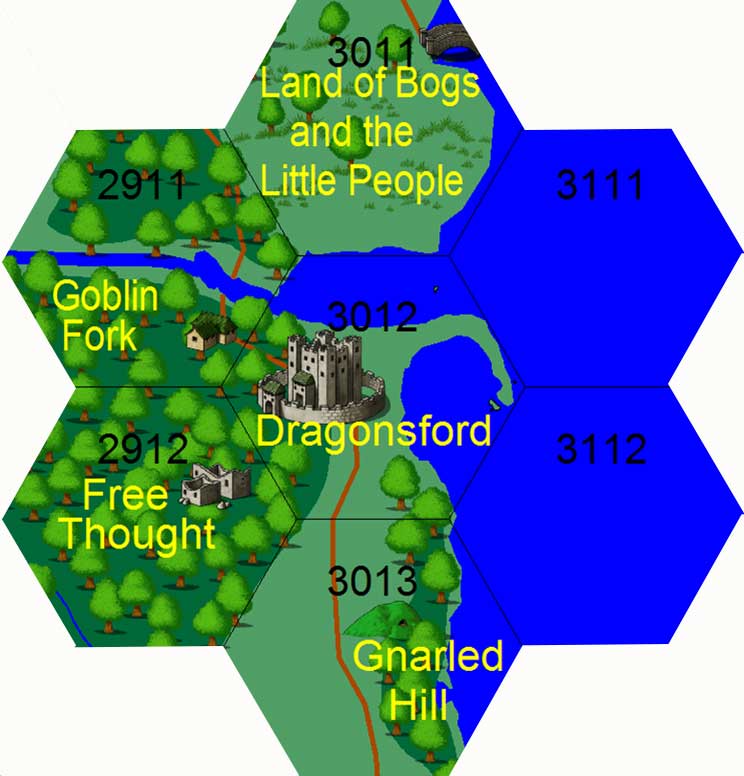 All that remains of the town of Free Thought is a stone building in the center of a clearing. The building is 100 feet long by 60 feet wide, unadorned with no windows and a single door in the south. The door stands ajar, and one would surmise that a human-sized creature could slip between its rusted hinges without any difficulty. Surrounding the building are a dozen mounds of rotted wood. The entire clearing is roughly 150 yards in diameter. Strung between the trees are massive numbers of spider webs, forming almost a curtain of sticky white strands that hang precariously close to the ground. The entire area smells of rotting flesh, and a strange humming can be heard when the wind blows.

This is actually the lair of an unusual type of carnivorous spider. The queen spider cannot move or attack. It simply makes eggs which are injected into a host human body. The eggs incubate for a time and then hatch into larvae. The larvae feed off of the human body until ready to emerge. In this state, they can move the human bodies slowly (like zombies). The larvae can strike with the limbs for 1d6 points of damage. If their host body is destroyed, the larvae (looks like a small hairless spider) will emerge and attack with the same number of hit points as the host. When grown, the spiders leave their host bodies and act pretty much like regular spiders. Their poison is weak (1d6 save to 1d3), but they have a powerful bite (1d8). The spiders are level 2, AC 8. The larvae are level 1, AC 10. 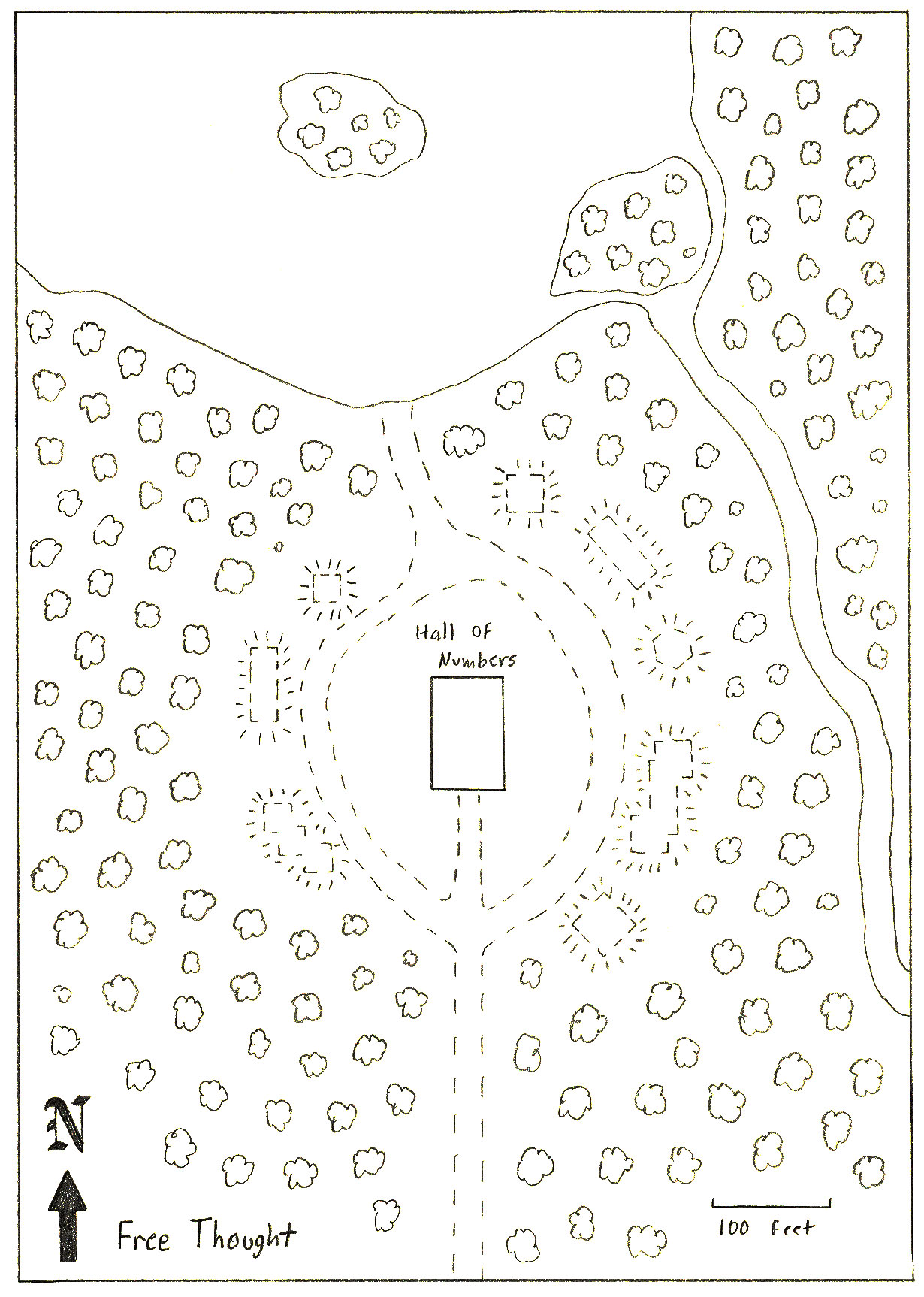 This room appears at first glance to be a proper pub. The walls are covered with wooden planks, now separated with age. On the wall hang eight portraits of men and women, presumably great thinkers. A massive wooden bar is in the northwest corner of the room. On it are a number of glasses, dishes, bottles of wine and ale, and the like. The bar shows signs of heavy damage, and there are bits of broken glass everywhere. Just inside the front door are four large round tables and several dozen chairs. Presently, the tables have be turned on end to form a barricade facing out towards the door you just entered. There is a stale smell of death in the room. Near the northern wall, in the center of the room is a hexagonal stone slab. Hanging in a mass of webs in the center of the room, from a beam in the center of the room is the queen spider. The four larvae are almost always here.

Careful examination shows that the portraits have small brass keys hung on hooks below them with the names of the person pictured. Behind the slab is the charred body of a human dressed in leather armor. The top of the slab holds a single keyhole. Presently, a melted lump of metal protrudes from the keyhole. The slab is carved with the following verse:

Girt with a boyish garb for boyish task,
Eager she wields her spade: yet loves as well
Rest on a friendly knee, intent to ask
The tale he loves to tell.
Rude spirits of the seething outer strife,
Unmeet to read her pure and simple spright,
Deem, if you list, such hours a waste of life
Empty of all delight!

Using the key under Gertrude Blackbark's picture, the slab slides away revealing stone stairs that lead underground. Using the wrong key, causes 4d6 hit points of electrical damage (save to half at 12th level).

This room is richly paneled, just like the main hall. Its walls are covered with shelves that are filled with books, metal measuring instruments, and the like. A large crack in the ceiling has allowed water to drip into the room, filling it with a musty smell, rotting the books, and rusting the instruments

A careful search of the room will reveal that the books are primarily concerned with mathematics, especially geometry. Also in the room are a potion and a small wooden box containing a gold coin.

This stone hallway is moist and dark. In the south is a portcullis which is down. A single door in the eastern wall is so swollen that it cannot easily be opened.

The door to this room hangs uselessly from its hinges. From its scattered contents, it is easy to tell that this room is a storeroom for foodstuffs and supplies. The side of the door shows the claw marks of a large animal, and the foodstuffs show signs of being eaten by a large catlike creature.

The door to this room is swollen shut like its counterpart above.

This room appears to have housed an extensive collection of wine, beer and spirits. The room is filled with mold and is musty. A large wine rack sits alongs the south wall.

If the party tries to break it down, the displacer beast in Room 6 will be alerted.

Careful examination shows that there is a secret door on the western wall. To the right of the door is a series of metal levers numbered from 0 to 9. Above the levers is the inscription:

H is the key to the treasures we Hold

The door to this room is completely rotted and hangs uselessly from its hinges. Inside the small stone chamber, a nest has been made with leaves, small branches, and the like.

The lair is the home for a displacer beast which will be sleeping (day) or out hunting (night). The displacer beast will attack if bothered or cornered. It will investigate if any loud noises are made.

This room is stone like the rest of the dungeon with a iron portcullis on the northern wall. In the southwest corner, a large hole has appeared in the floor. An initial inspection shows that the hole was caused by the floor collapsing into a cave below. The room is empty.

Careful examination shows that there are scrape marks on the stone floor as if a large iron chest was drug across the floor and into the hole.

The rough hewn caverns under the Hall of Numbers are damp and dark. The ceiling of this room is 30 feet, dripping and shrouded in shadows. The sound of rushing water can be heard from the northeast passage. The floor of this room is littered with large stones and dirt.

Careful examination shows a number of large insect-like footprints and the scrape marks of a large chest being dragged along the northwest passage.

This passageway at first glance seems out of place. The tunnel is very narrow and squat with barely enough room for a man to walk bent over. The sides of the tunnel are supported by a series of wooden poles, rotted and bent. One could imagine that striking one of the poles would bring the entire passageway down.

The northern end of this passageway has a small pile of rubble in front of it.

The dirt floor gives way to slick rock in this passageway as the eastern wall is a cascade of water coming from a crack in the ceiling and falling twenty feet into a dark pool below. The western wall holds a narrow ledge of slick rock ledge that must be traversed in order to navigate this passage.

This passage shows signs of recent travel by the bug creatures and the chest.

Very careful examination (Indoor Tracking -50%) will show a set of human footprints among the bugs. Otherwise, this tunnel in unremarkable.

Like the rest of the underground dungeon, this room is a natural formation. Light can be seen coming from the northern entrance during the day, and fresh air will be detected in any case. This room is filled with dung and trash, piled in heaps around the lair.

The Beetleman is a lunatic young man who thinks that he is the Beetlegod, Baba. He is thin, covered with mud with disheveled hair and black teeth. Baba has made friends with three large fire beetles and can command them rudimentarily. Baba will be difficult to deal with. He is second level, AC 10, and strikes with a rusty dagger for 1d4.