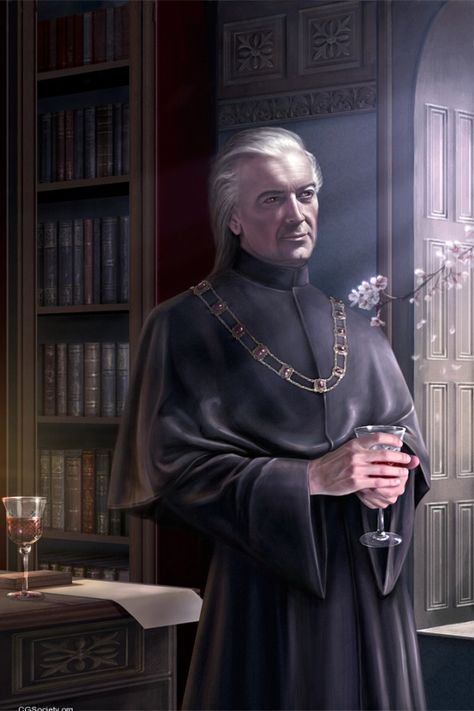 Lord Nils Treadway, Ninth Baron of Huntingdon, is a distinguished-looking man in his early fifties. With long gray hair and piercing brown eyes, he has the unmistakable demeanor of a noble. He is soft-spoken and thoughtful, although his tactics in business have been described as harsh. He demands respect from those who serve him, although he is oftentimes indulgent of family and friends. Lord Treadway is an accomplished fencer but without any military service or actual battle experience.

Like his father, Nils is primarily interested in business and commerce. He is the most senior noble in the courts of the Western Reaches tracing an unbroken lineage back to the founding of the vassal kingdom of Huntingdon via a land grant in 585 TA. While tales of piracy and smuggling have long been attached to Nils' grandfather, Emery, the present Lord Treadway is an upstanding and trusted member of the Order of Merchant Keymasters and the Crown where he acts as an economic adviser.

Lord Treadway lives at opulent Treadway Manor, an ancient manse on the edge of the Inner Sea in the Royal Quarter of City-State of Teufeldorf. Lord Treadway rarely leaves the city, preferring the comfortable life as a merchant noble. His family includes his wife of twenty years, Elizabeth, and two grown sons, Hugo and Wilton. The manor is well-staffed, and Elizabeth throws parties there with regularity. The Treadway Spring Cotillion is a highly-anticipated social event in the city. The elder Hugo shadows his father in the city on business. Wilton is often gone, travelling the Treadway lands with regular stops in Vardan, Azgarde, Sirendell and an occasional hunting trip to the Halewood.

During the Tang occupation of Teufeldorf from June 899 TA through August 900 TA, at the onset of the Second War of the Reaches, Lord Treadway assumed a leadership role as trade negotiator between the Emperor and the Crown. Treadway worked tirelessly for maintaining trade routes and shipping during the conflict and was instrumental in negotiating the treaty between the two nations in September 905 TA.

Nils and Hugo were both in the Tang Empire when the Emperor Shiba was found dead and his successor Kaji was named. No ties to the Treadways were ever confirmed. Lord Treadway maintains close ties to Emperor Kaji.