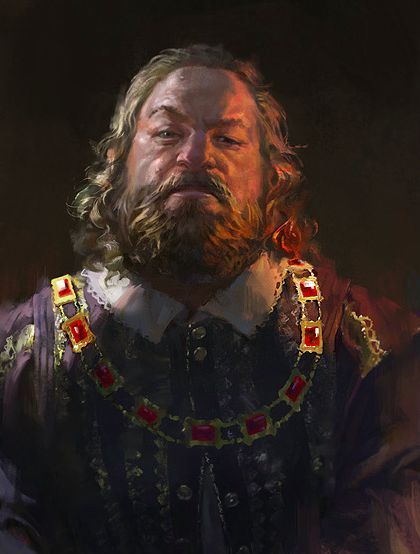 Noel Guildford, the Thirteenth Baron of Guildford, is an enormous man of great appetites. In his fifties, his brown hair and beard are showing the first signs of grey, although his countenance is still that of man many years younger. While rotund, Noel is in remarkably good shape - hunting in the forests of his lands or fishing in the streams that run down from the Shadowyarn Mountains. He is an accomplished bowman. Noel is well-liked by his people, and his perpetually-festive mood makes him a popular companion for other nobles and especially the local dwarves.

Noel is well-known by his nickname "The Feasting King" owing to his love of a good feast, a good game, and a good woman. In fact, while his barony is aptly run by his advisers, Noel travels almost constantly - a long succession of events and parties that alternate between the City-State and Guildford. The Barony enjoys wealth and a relatively protected position in the Western Reaches.

Baron Guildford is married to an equally rotund and jovial woman, Poppy. The Guildfords have twelve children of varying ages. Poppy and the children live in Teufeldorf in a mansion affectionately called, the Feasting Hall. When it town, Noel and Poppy are always seen together and appear to love each other's company. When apart, Poppy is just as likely to have a male suitor as her husband is to have a female companion. Odd as it is, the arrangement seems to work for everyone. Noel is thought to have hundreds of bastard children strewn from Teufeldorf to Dwarrowdelf along the Lesser Farthing Road. Mothers petitioning for gold are always given a generous donation from the Baron.

A staunch defender of King U-Gene's policies, Guildford has benefited from a number of dwarven strongholds being built along the front range of the Barony during the First War of the Reaches. The Shield Lands to the south provide some protection from the Bandit Kingdoms, although raids into Guildford lands still happen on occasion. These are mostly shrugged off by the Baron as incidental.