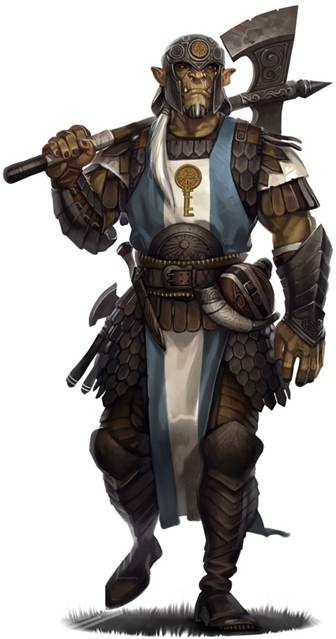 Orcs are slightly taller than humans with powerful builds and greenish or grayish skin. Their canines often grow long enough to protrude from their mouths, and these "tusks," combined with heavy brows and slightly pointed ears, give them their notoriously bestial appearance. While orcs may be impressive, few ever describe them as beautiful. Orcs tend to live shorter lives than humans rarely reaching fifty years of age. Orcs are ferocious and relentless fighters with a reputation for chaos and brutality. However, this gross stereotype is not always deserved as some orcs consistently manage to surprise their detractors with great deeds and unexpected wisdom—though sometimes it's easier just to crack a few skulls. A lifetime of persecution leaves the average orc wary and quick to anger, yet those who break through his savage exterior might find a well-hidden core of empathy. Orc adventurers are staunchly independent, living lives of adventure out of necessity, seeking to escape their painful pasts or improve their lot through force of arms. Others, more optimistic or desperate for acceptance, take up the mantle of crusaders in order to prove their worth to the world.

In recent years, the Orc Nation has been largely conquered by the Armies of the Reaches - and many orcs have been subjugated to join the fight against outside forces - the Tang Empire and the creatures from the Wolfshaunt. As such, orcs are more generally accepted into human society, although most are viewed as simple soldiers. Goblins, as the spellcasters and shaman of the Orc clans, are less well accepted than their larger cousins.

Some orcs that are sympathetic to the alliance between the Orc Nation and the human kingdoms of the Reaches will join the Bright Orcs.