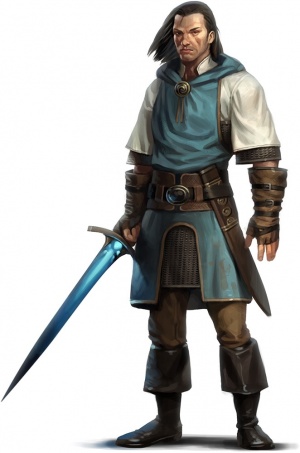 Originally hailing from the March of Greenvale, Christof Jonah Purifoy grew up on a farm just north of Axewood. Whether tilling the soil with his father and three older brothers, hunting in the woods, taking on friends and neighbors in games of strength and speed, or courting the lovely girls of the nearby villages, CJ was relentlessly competitive. His successes grew as he did.

At twelve, he downed the largest buck anyone could remember. Not two years later, he hurled the throwing stone five paces farther than any other competitor in the harvest festival games. His father privately boasted as to how his youngest was twice the farmer he was, and three times that of his brothers combined! But without even a modest inheritance in his future, friends and family began to suggest what he might do when he came of age.

"Church of the Hearth priests live very comfortable lives!" his mother alleged one Sunday afternoon, as the portly Father Ren jovially patted his stomach in agreement. Later, Ren expounded upon the years of training he had endured to reach the pinnacle of being a parish priest serving seven small villages.

One harvest festival, a stranger tried to convince him to take his talents to the Collegium Magicium, where they would surely make a great Battle Wizard of him. Unfortunately, someone overheard, and soon a mob chased the wizard halfway to the Blackwater.

The local blacksmith had a less aspirational pitch. "Ye could be me apprentice."

Thane, CJ's oldest brother, and heir to the farm, offered a room in the barn, "...and you could marry one of my best pigs."

But before any of those dreams could come true, his life changed. The summer before his sixteenth birthday, he was planting winter wheat next to the Mills farm while lovely Heather washed clothes on her back porch. Her father and two brothers were harvesting corn near the house. Idly watching Heather pin clothes to the line, he nearly strayed from a straight furrow. Suddenly she shrieked and fell in a heap. Dropping his plow handle, he raced across the fields as her family did the same, corn knives in hand. By the time her father reached her, CJ had already placed a tourniquet around her leg and was carrying her into the homestead. A headless snake lay writhing in the dirt nearby. Heather recovered, thanks to CJ's quick actions. Too quick, neighbors began to say. Inhuman speed. Magical, most likely. The whispers grew louder, and the rumour grew in the telling. Soon he was part orc, dragon blood flowed in his veins, and he could call down lightning on his enemies!

Father Ren suggested he join the Gran March militia garrisoned in Five Forks, telling them nothing of what had happened here. Not wanting to leave his home country, he instead traveled to Greenvale. Two years later, while guarding the horses of a visiting nobleman, a similar event occurred, and new rumours swirled in the barracks. He was asked to resign from the militia. The folk of Greenvale do not appreciate magic.

The visiting dwarven nobleman appreciated CJ's efforts, however, and hired him as a bodyguard. Representing Durinshold, and set to negotiate a comprehensive trade agreement with the Eastern Reaches, he was a powerful and important dwarf. For four years, CJ guarded his horses, his regal carriage, his luggage, and eventually his lordship's person.

Portsmith was a fascinating place in the summer of 907 TA. Jana Blackfire, the Crusader of Portsmith, had assumed control of the city, and CJ's lord and master had tried for two months to gain audience with her to no avail. Then his senior-most bodyguard was arrested for making a disparaging remark regarding the Order of the Silver Throne. The charge was a lie, of course, but the city guard no longer cared for due process, if they ever did. Twist, the dwarf most responsible for CJ's current level of professionalism in his chosen career, was a man of few words, and none careless. Twist's few weeks in "The Vault" were marked by increasingly reckless - for his lordship - attempts at diplomacy by CJ's lord, culminating in an angry exchange with one of Blackfire's deputies wherein mild threats were made, and the lord himself was brought to the Vault in chains. CJ demanded he be allowed to continue to serve his master during his incarceration, and so found himself witnessing the dwarf lord being branded with the mark of The Gavel. Justice Henry Meekson dispensed this "justice," but refused to give CJ the same brand, despite CJ's insistence that he was as guilty as his lordship - that is, not at all. The Justice deemed CJ an innocent in this matter. Twist was not so lucky. A few days later, his branded and beaten body was found in a gutter behind the Lantern and Gargoyle.

His lord paid a healer a great deal of gold coin to nurse Twist to enough health for travel, but nothing could be done for his severe head injuries. Meanwhile, a group of rebels had begun to stir things up in the city...

...and eventually he's eating stew on a boat, after having been separated from his employer because of reasons...