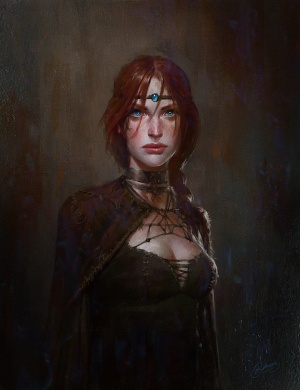 Emily Ward is the Nineteenth Baroness of Wendover. She is a petite woman in her mid-thirties with auburn hair and intense blue eyes. Unlike most of her noble counterparts in the Western Reaches, Emily is a warrior, besting all competitors at the Twenty Year Games in 901 TA - a contest held to determine the next leader of Wendover. Emily is expert with sword and dagger and has an uncanny ability to avoid punches in a bar fight. She is generally quiet with a brilliant mind for battlefield strategy and tactics. She demands respect from all that meet her, and those who underestimate her abilities soon learn from their mistake.

Emily's father was a captain in the Army of the Reaches. He was killed during the Massacre at the Wilderland River in September 883 TA when the undead overran three thousand Reaches soldiers. A few months later, Emily's mother, a camp-follower, died in childbirth with Emily and her twin sister, Alice. While Alice was adopted by the Harper family, wealthy merchants from Loftwick that eventually moved to the safety of Teufeldorf, Emily remained at the castle and was raised in a soldier's orphanage for those whose parents were lost in the war. Her last name of Ward reflects a harsh but practical upbringing.

At thirteen, Emily joined the military and did patrol duty in the Grimore Jungle. She considered joining the Rangers of the Wilderlands, but decided for garrison duty in Wendover instead. She quickly became a squad leader and started a distinguished military career at sixteen with the outbreak of the Second War of the Reaches.

Upon her victory at the Games in 901 TA, Emily was named the Nineteenth Baroness of Wendover. Rather than assume the diplomatic residence in Teufeldorf, she appointed her sister, Alice Harper, as Regent of Wendover with full diplomatic powers in the City-State. Although separated as toddlers, it is rumored that the sisters share a telepathic link which allow them constant communications. Emily remains at Grunfield Castle and is an active military commander for the Reaches.

Under Emily's guidance, Wendover remains on good terms with the elves who act as caretakers for the Grimore Jungle in the east and the Grand Wood to the west.