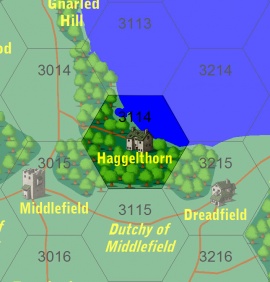 Sixty fighting men serve under Lord Elias Haggelthorn. These men keep the forests around the hamlet safe for travel. About once each month the Haggelthorns send out two merchant caravans loaded with goods. One travels to Dragonsford and the other to Dwarrowdelf. These trade for the supplies needed by Elias Haggelthorn and make a sizable profit for the merchants involved.

The name of Haggelthorn has been attached to the forest for hundreds of years, and just about every traveler in the area knows of the unusual exploits of this strange merchant family. Although one of the smallest minor kingdoms in the Eastern Reaches, Haggelthorn is one of the wealthiest.

Haggelthorn is the merchant center of the Eastern Reaches. The town's population exceeds 1,000 inhabitants. The upper town was established in 663 TA and completed with the construction of the Docks and the Owl's Head Lighthouse in 668-669 TA. The new Haggelthorn Hall (see The Spiriting of Haggelthorn Hall below) was completed shortly thereafter. Strangely, Haggelthorn did not suffer attacks and raids from orcs and other terrors that plagued the Eastern Reaches during its early years. Some hold that strong magic from the Hall protected the area. Others believe that the hamlet simply wasn't worth the effort.

In 730 TA, the village of Darkwood was founded south of the hamlet as a refuge for criminals, pariahs and other undesirables. Darkwood was considered a separate village with its own mayor. The two villages existed peacefully side-by-side until the Brimbleweed family from Darkwood took over the Hall during the absence of the Haggelthorns in 803-832 TA. Upon the Haggelthorn's return from an "extended buying trip", the interlopers were rounded up and killed along with a purge of Darkwood residents found to be co-conspirators. Today, few buildings in Darkwood remain occupied and only three businesses are still located there (Druid's Head Inn, Noble Metals, and Weft Threads). The Chapel of St. Betherd and the Hermitage are also vacant.

In 835 TA, a plague in Haggelthorn sickened many villagers. Many of the inflicted fled. The villagers who remained behind and those subsequently moving into the area have demonstrated an uncanny level of loyalty to the Haggelthorns. Some blame dark magic, but the safety and wealth of the town have overcome any fears, and Haggelthorn continues to grow and prosper.

In the mid-seventh century TA, the Haggelthorns were one of the wealthiest families in Teufeldorf having made their fortune as merchants. However, the eldest of the Haggelthorn sons, Ichabod, decided to expand the family business into dealing with objects of art, magic, and the occult. He longed to travel to far away lands to find strange treasures. An odd little man, nobody was surprised when Ichabod announced that he was moving to the Eastern Reaches to start up his business. However, everybody was surprised when he ordered the family mansion, Haggelthorn Hall, to be moved stone by stone with him. Needless to say, Ichabod took many servants, workers, and craftsmen with him. It took over three years to complete the move, and transplant Ichabod's family home to the coast of the Inner Sea. Many of the people who traveled with the eccentric merchant stayed in the Eastern Reaches.

The original Haggelthorn Hall, was relocated to the top of a hill overlooking the current-day port. When every stone in the Hall was "spirited" away in 666 TA, a new structure was built on its foundation by the sole surviving member of the family, Henrick Haggelthorn. That structure still stands today and is the ancestral home of the Haggelthorns. Other than a brief period between 803-832 TA when the Hall was occupied by the Brimbleweed Family, a Haggelthorn has been lord of the manor for almost 250 years.

There have been seven generations of Haggelthorns in the Eastern Reaches, although the family lineage extends further back during the family's tenure in Teufeldorf. The current ruler is Elias Haggelthorn.

Haggelthorn Hall sits upon a hillock which is otherwise covered with trees and shrubs. The estate wall and the manor itself are made of cut stone. The house reflects a Gothic style with intricate carvings, statues, and scroll work in abundance. The building is a two-story structure with the exception of the tower which is four stories. The graveyard and slave quarters lie at the bottom of the hillock. 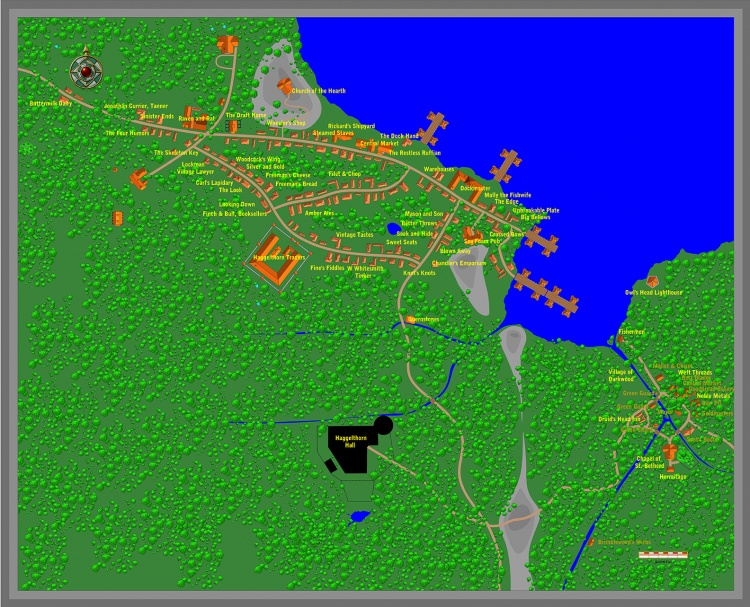 Legend: The Spiriting of Haggelthorn Hall

He was a strange little man that Ichabod Haggelthorn. Never said much to anybody. Just stayed to himself and played with those shrunken heads and things. Called it studying the occult he did. Everyone knew he was a bit crazy, but with his money they listened to him anyway.

Well, the story begins about a year after Haggelthorn Hall was re-built in the Eastern Reaches. It was a foggy autumn night sometime in late October when it happened. My great-great-great grandfather had just finished his rounds (being a night sentry, you know). The woods were crawlin' with evil things back then. But, my great-great-great grandfather hadn't seen nothing except a lone yellow light coming down from Haggelthorn Hall. He reported to the captain and was on his way to bed when the fog started gettin' real thick just like the town had passed into a cloud. The lights in Haggelthorn Hall were all out, but he could see the outline of the building as it lifted into the air. It was just floating there on top of the fog. Suddenly, there was a loud creak as if the gates of hell were opening up and the Hall began to move down the hill and into the forest. Well, my great-great-great grandfather ran to tell the captain what was happenin', but the captain told him to stop drinkin' on the job and to get to bed.

When the sun rose the next morning and the fog was burned away, Haggelthorn Hall was gone. Only Henrick Haggelthorn was left. Said he was away on some late night business - to a brothel if you ask me. I'll tell you what happened, those spirits that Ichabod was dealin' with they's the ones that came and spirited the Hall away. Well, Henrick's great-great-great grandson, Elias, is runnin' the business now. Calls himself a lord he does and still deals in those shrunken heads and things. Probably will get himself into trouble too. A real high and mighty type he is. But those boys of his ain't too bad.

Well, that's the story of the Spiriting of Haggelthorn Hall. Just as it happened. Honest. The story has been passed down from father to son for generations in my family. We knows it first hand.

Legend: The Dreamlands of Haggelthorn Hall

My story starts around 790 TA - about 120 years ago - with the untimely death of my great grandfather Damien Haggelthorn. Like the generations before him, Damien was a merchant and collector of artifacts. A bit too successful, Haggelthorn Hall overflowed with odd and unexplored artifacts - some of which turned out to be dangerous. Damien was killed in 790 by a strange fog that filled the Hall one night after one of his "summoning parties". He liked to read old rituals to see what would happen.

as told by Elias Haggelthorn

Haggelthorn is a merchant town and has a better than average array of merchants and craftsmen although prices seem to be high. Adventurers may purchase any mundane items from the Pathfinder Core Rulebook equipment list (pp. 140-163) with the exceptions noted below for the list price without roleplaying. Haggelthorn also has a good number of magic items available from its vendors, and it boasts the Haggelthorn Traders (independent from the Ravenswood Trading Posts) which sells a limited number of very powerful items. All magic and unusual items will need to be roleplayed.

There are a number of magic items for sale in Haggelthorn. Adventurers must roleplay buying these items as their purchase may alert important NPCs to party actions. And, clever adventurers may want to try and bargain for a better price. The items listed below can be bought for any sized creature.

The Haggelthorn Traders has a handful of powerful magic items for sale in town. Adventurers must roleplay buying these items.

Items unique to Haggelthorn are included below.