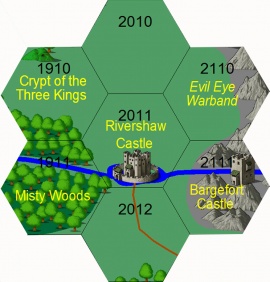 The March of Wirkswirth was founded in 653 TA as a military buffer between the Orc Nation to the north and the Western Reaches to the south. The capital of Wirkswirth is Rivershaw Castle which was significantly enlarged in 715 TA. As a military outpost, Wirkswirth has little farming or agriculture. While the lands are fertile, the area is still too wild to support large-scale farming efforts.

The push into the northern Misty Woods is a recent event - starting in the spring 887 TA. Following the Orcish Rebellion of 887-889 TA, King Fleetwood made the decision to formally extend the March of Wirkswirth north of the River White. The first order of business was the building of a central castle from which to stage military actions against the Orcs of the Evil Eye and the Horned Society. Construction of the Black Owl Garrison was done quickly, and with few incidents or delays. Currently, the castle has a permanent garrison of forty men – with the ability to house several hundred at full capacity.

The Black Owl Garrison sits upon a steep hillock which provides a commanding view of the forest to the north, east and west. The castle is accessed most easily from a single bridge on the south side of the complex. This bridge leads to the only access road in the area running east to Rivershaw Castle and west towards Hookhill. The fort consists of a Lower Gatehouse which includes a stable and lower bailey and an Upper Keep which includes several towers and a gatehouse.

The current structure was built in 887-889 TA by the Lord March of Wirksworth whose engineers came across the location during a scouting mission in 886 TA. A long-abandoned abbey sat on the site and significant underground works were already in place, albeit crumbling into decay. It is unclear as to the religious order of the previous occupants, as no written remains were found during the initial scouting mission or subsequent construction efforts.

In 887 TA, the Lord March ordered the clearing of trees near the site, and the present castle is built from the stones of the abbey itself. The Abbey Tower is named to commemorate the previous structure, although several reports of hauntings have been made. The source of the ghostly appearances has never been established.

During construction, the Lord’s workers reported a large black owl that had previously roosted in the abbey ruins now watched the construction. The owl would often be seen at night flying between the structures, while during the day it could be seen watching the activity from the nearby forest. The Black Owl’s Tower is named for this creature, although its appearances have been less frequent of late.

The Misty Woods extends east of the Iron Hills into the great plains of the middle Reaches. Originally thought to be primarily south of the River White, extensive expeditions during the early Third Age discovered a vast tract of trees north of the river as well. The Misty Woods is now known to extend north to Hookhill.

The southern extent of the Misty Woods is well-traveled and explored. This area is currently populated by a reclusive society of elves who rule the area from the tree-city of Veilflower.

In January 827 TA, a band of night-dwelling humanoids with long talons and fangs raided the elven tree-city of Veilflower in the Misty Woods northwest of Ironwood and made off with the Scepter of the Elvish King. In the months that followed, the Scepter was used against the Elves of the Misty Woods. All the elves who tried to combat these evil foes died a gruesome death.

In March 827, Eregothin Lightningsword armed with magical crown which imbued him with immunity to the scepter sought non-elvish companions in his quest to regain the Scepter. Later in that month, a party consisting of Eregothin, Sir Zachary, Hylax the Barker, U-Gene the Dwarf, Zephaniah the Good, Falstaff, Sirfexx Ivancevio, and Blackfoot successfully stormed the dead tree fortress known as Ironwood, several days journey to the southeast of Veilflower. There, Direnthell the Eye Tyrant, and his minions were defeated and the scepter regained. It is rumored that the Elven Stones were found in Ironwood and taken by Falstaff.

North of the River White, there are no elves - only orcs. The Misty Woods is the last bastion of Orcs of the Evil Eye west of the Shadowyarn Mountains. In 890 TA, the forest was put under the protection of the Lord March of Wirkswirth. Currently, efforts are underway to root out the orcs and the evil denizens of Hookhill.