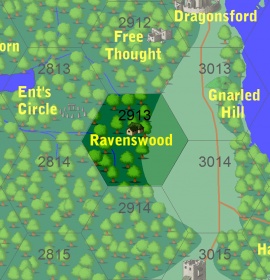 A small elven village has been at the current site of Ravenswood since the early days of the Third Age. Its name derives from the original name of Haggelthorn Forest - Ravenswood. The village is secluded and rarely involves itself in the affairs of the humans of the Reaches. Strangers are tolerated for short visits, and merchants have been known to trade with the elves of the village. The ruler of the village is an elven ranger, Ellisae Morningstar. She is a tough elf of few words and strict discipline. Ellisae is known to confront King Goodfellow when the health of Haggelthorn Forest is jeopardized. Andwen is the high priestess of the Order of the Silver Acorn in Ravenswood.

Haggelthorn Forest is second largest terrain feature in the Eastern Reaches. Although it is now surrounded by small villages and towns, adventurers rarely venture into the forest. In elder times the forest was known as Ravenswood, and many of the inhabitants still use this name. The expanse of Haggelthorn Forest is about 300 miles in diameter. Although the forest extends south of the Hamlet of Haggelthorn and north of the River White, most of the strange happenings in the forest seem to be centered around the lake at its center. With the exception of the few stories told by the Rangers of the Wilderlands, the tales which come out of the area are usually based on superstition and fear.

A single path winds its way from near the Hamlet of Haggelthorn to Dwarrowdelf (formerly the Free City of Paddington). Forged during the early trading days of Ichabod Haggelthorn, the path proved to be a dangerous shortcut. Still it is the only "safe" path through the forest. This path (sometimes known as the Trail of Ichabod) passes over several fresh water streams which are rumored to lead to a large fresh water lake. Many tales are told of the happenings at the lake. Tree ents, elves, and woodland sprites are often the instruments of the strange happenings in the forest. But a tale of a secret religious cult deep within the darkest woods is also told around the pubs at night. The most famous tale told of Haggelthorn Forest is the spiriting of Haggelthorn Hall in which Ichabod's great mansion was lifted on a cloud of smoke and fog by the spirits of the trees and taken deep within the forest. It is said that Ichabod still lives in Haggelthorn Hall deep in the forgotten woods of his forest.

To the west of Ravenswood, an ancient circle of stone monoliths stand as silent sentinels around a circular hollow filled with a dense tangle of trees. The stones, known as the Ent's Circle, are rumored to be home to the Shades of Ravenswood - fae creatures of immense age and power who live deep in the hollow. The stone circle has been used as a meeting place for the Order of Druids, the Rangers of the Wilderlands, and the Ravenswood Ents before them. No outsiders have visited the Ent's Circle - keeping its purpose shrouded in secrecy for decades.