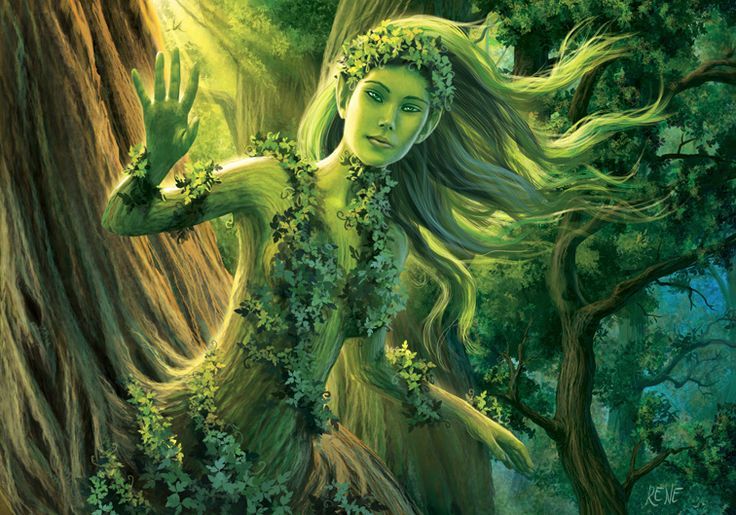 Before elves, dwarves, dragons, or humans made their mark on the Realm, the verdant forests of the world were the domain of the fey. This was a time before cities and civilization, when forests covered most of the continents and life followed the natural order.

Of the fey, the ents are the oldest creatures in the Realm, some having survived for thousands of years. Once numerous, today many ents have become dormant, although the ones still active have memories of times now long forgotten. These great treefolk protect the history of the woods, not caring for the tribulations and achievements of the other races. They are guardians of the Old Ways. It is said that even today, any forest of good size and age will have an ent somewhere in its ancient copses.

While the Fey are as varied as the trees in the forest, together they form a forest's circle or court. Tied to the woods by a common bond, the queen of the court is usually a "large" fey, typically a dryad. Dryads are always associated with an ent tree and are thought to be immortal, despite their ever-youthful appearance. A dryad's emergence from their tree and the summoning of the fey court are the sources of the mid-April human holiday of Waking the Forest.

The other large fey are more rarely sighted. The sylphs of the high mountains are air fey, and the nymphs of the Realm's lakes and rivers are water fey. Both fiercely protect their domains, but they are rarely encountered by outsiders.

The forest courts have been the source of poetry, fascination, and mystery throughout the ages. Scholars have studied them and adventurers have sought them out, but contact with the fey court is elusive. What is known is that each court is "ruled" by a queen, almost always a dryad, and is populated with a variety of small and tiny fey depending on the size and climate of the forest. The language of the fey is sylvan.

The "small" fey are generally two-feet or less in height and wingless. This group includes brownies, the most commonly-seen fey outside the circle. Less inclined to wild fey antics, brownies act as emissaries to the elves and the outside world. Akin to brownies, small "wild" fey are called by a variety of names throughout the Realm: boggarts, boggles, gremlins, leprechauns, quicklings, and redcaps - to name a few. These fey are found sprinkled in human legends throughout time. Interactions are frequently mischievous, and strong evidence supports small fey having ethereal powers. Some believe that hobbits are related to brownies, although this connection is unproven. Small fey make their homes in the trunks of hollow trees, small earthy burrows, and even under porches and within the crawlspaces of farmhouses.

Rarely traveling outside their forest, are the "tiny" fey. These winged fey are the scouts and guardians of the forest, quickly returning to their queen with news of invaders or threats to the circle. In the forest, these creatures are called sprites, while the air and (wingless) water varieties are called pixies and nixes respectively. In times of great peril, tiny fey are known to work together. If attacked, tiny fey will defend their territories ferociously and are also the subject of many human legends. The tiny forest fey live in fairy mounds, nesting in trees when traveling far from home.

Under the guidance of the fairy queens, fey will oftentimes work in conjunction with other creatures of the forest, including giant animals and forest-dwelling humanoids such as centaurs and satyr.

Human tradition holds that the mid-October feast of the Third Harvest marks a time that the fey return to their mounds for winter. Offerings of food and drink are left for the fey to help them during the long, dark winter. Only the ents are active year-round, although great events can wake the fey from their snowy slumber.