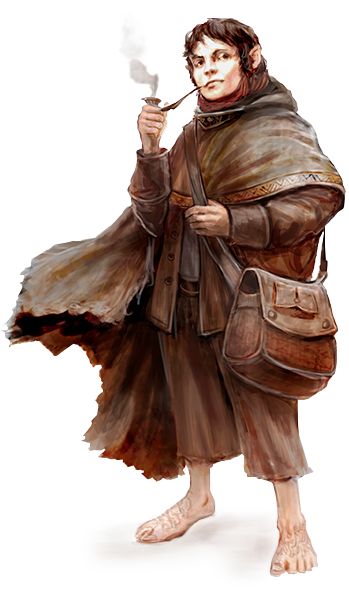 Hobbits and gnomes are the "wee folk" found commonly throughout the Reaches.

Hobbits rise to a humble height of 3 feet. They prefer to walk barefoot, leading to the bottoms of their feet being roughly calloused. Tufts of thick, curly hair warm the tops of their broad, tanned feet. Their skin tends toward a rich almond color and their hair toward light shades of brown. A hobbit's ears are pointed, but proportionately not much larger than those of a human. Optimistic and cheerful by nature, blessed with uncanny luck and driven by a powerful wanderlust, hobbits make up for their short stature with an abundance of bravado and curiosity. A typical hobbit prides himself on his ability to go unnoticed by other races — it is this trait that allows so many hobbits to excel at thievery and trickery. At once excitable and easy-going, hobbits like to keep an even temper and a steady eye on opportunity. Even in the jaws of catastrophe, a hobbit almost never loses his sense of humor, although his curiosity often overwhelms his good sense, leading to poor decisions and narrow escapes. Though their curiosity drives them to travel and seek new places and experiences, hobbits possess a strong sense of house and home.

Most hobbits come from small settlements in the remote forest meadows along the coastal regions of the Western Reaches.

Hobbits are not particularly religious and have no racial deity. Two long-dead hobbits, Tobias Greenleaf and Brandobaris have significant human and hobbit followings in Teufeldorf - as masters of luck and stealth respectively. Hobbit clerics will sometimes join other human religious orders. Adventuring hobbits are commonly members of the Fellowship of Wee Travelers.