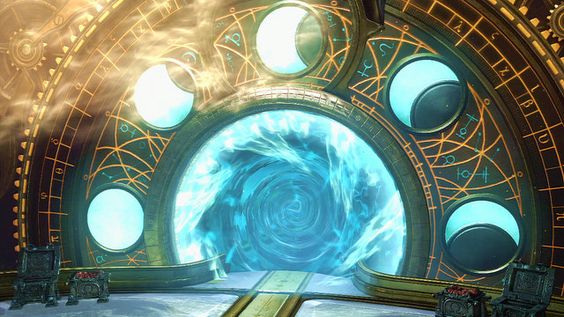 I start by introducing the concept of a dimensional world. This concept can be defined as a discrete spatial reality in which beings can exist and take action. My study seeks to illuminate some of these dimensional worlds and how travel is possible between them.

There are four classifications of lands beyond the Realm - also known as Pendar or the Land of the Living.

I start work on four runes for my staff. The first rune, which I call Pendar, will allow me to travel effortlessly between the Realm, Oblivion, and the Land of the Dead. I will utilize a Dead Man’s coin in the forming of this rune. The second rune, which I call Voidwalker, will allow me to travel to the Void. As I gain skill and do additional research, I expect to be able to travel through the twenty-eight portals at will. What treasures exist beyond, I dare not try to imagine. I will utilize a Compass of the Void in the forming of this rune. The third rune, which I call Aether, allows me travel through the Aether without limitation. My corporeal body in the Realm will become a simple extension of my far-travelling soul. I will utilize a Pyramid once used for transport in the Netherworld to form this rune. The fourth rune, which I call, Timelord, I suspect will be the most difficult to master. This rune, in combination with a locational rune, will allow me travel both forward and backwards in time. Perhaps one day I can visit the Navigators in their mighty ship before it was destroyed, or see the world beyond the end of my days. I leave the last space on my staff empty. I must admit that the last rune will be carved when I am ready to travel to those worlds outside of the tendril net which binds the dimensional worlds to the Void. I long to be the first traveler to repay the visit made by the inhabitants of Pellum to our humble world and to learn the secrets of their vast magic.

Consideration for the Nine Books of Magic:

Properties of the Aether:

In the Land of Shades

In the Land of the Dead