The final battle of the Netherworld Campaign pits the forces of the Elder Gods against those of the First Tribe.

The Elder Gods had roamed the surface of the Realm since the dawn of time. Their power was absolute, and even the gradual evolution of warlike mankind seemed to be inconsequential. Legend holds that there are eight Elder Gods.

The war between these two ancient foes started many millennia ago, before the beginning of the First Age of Man. Despite their superior strength, the Elder Gods were imprisoned because of their arrogance and refusal to cooperate with one another. For thousands of years, the Elder Gods lay imprisoned in a cave-like tomb at the base of the great tree, Lyam-an-Esh, located in the center of the mysterious Netherworld. Of their numbers only two, Oakentree and the Chronicler, escaped being captured and were free to roam the Realm. Oakentree alone stood as a bastion against the strength of the First Tribe and kept the fragile forces which formed the Realm in balance. The Chronicler seemed content to watch passively, recording the events as they played out.

It was late in the Third Age of Man that one of the First Tribe, Baradar, sought to disrupt this balance and claim all of the Realm for himself. Baradar, along with the mighty power of Xystus, forged treaties with the Kingdom of Sandal, the Darksouls of Giantshome, and the Orc Nation. In addition, he called upon the ancient forces of the banished races: Demogorgon, Foultooth, and the demons of the Thirteenth Covenant. The power of this Brotherhood was too much, and the Heroes of the Realm were sent to stop Baradar, at any cost.

The party has learned the following information which could be useful in the final battle:

"The time has come at long last to reveal some information to you that will be of vital importance during your final encounter with the First Tribe. I will be unable to aid you during your quest, and, in fact your powers may wane as you approach the Cave of the Elder Gods. I charge you, Falstaff, with the following two quests:

"First, there lies in the Netherworld, within the Cave of the Elder Gods and near the place of warding, a tree of perfect symmetry with silver branches and red fruit. This tree is my physical body. Without the use of the tree, I am unable to assume any manifestation of physical form. When I was forced to flee the attack of the First Tribe, my body was left behind. For this reason, my work has been done for thousands of years by a faithful following of druids, rangers, and scouts.

"Completion of your quest will cause a great explosion of magical power which will, in turn, destroy the Netherworld. In releasing this energy, you will destroy my body and my only hopes of joining the physical world. Over the millenia, the First Tribe has kept my tree alive for the sole purpose of capturing my soul when I attempt to retrieve it. Although the need has been great at times and many have suffered because I could not aid them, the risk of returning to my body was too great. Without me, the world would have no protection from the evil powers of the First Tribe. Your first quest is to attempt to recover a piece of that great tree, a twig or leaf, that can be replanted and nutured into a new home for my soul. The hardship and adversity that you face will be the greatest of your career, but you must try to complete this request. If, by some miracle, you can wrest the shackles of this trap from the entirety of the tree, I will return and aid you in any way that I can.

"Your second quest is to open the Cave of the Elder Gods and free my brethern who have been trapped for so many centuries. I do not count the world who will receive these creatures lucky. No, in fact, the suffering of the Realm will be great, but the alternative is complete devastation at the hands of the First Tribe. They must be stopped at all costs, even at the loss of the tree. Do not attempt to reason with the Elder Gods, for that folly will cost me your life uselessly. Release them and avoid them. 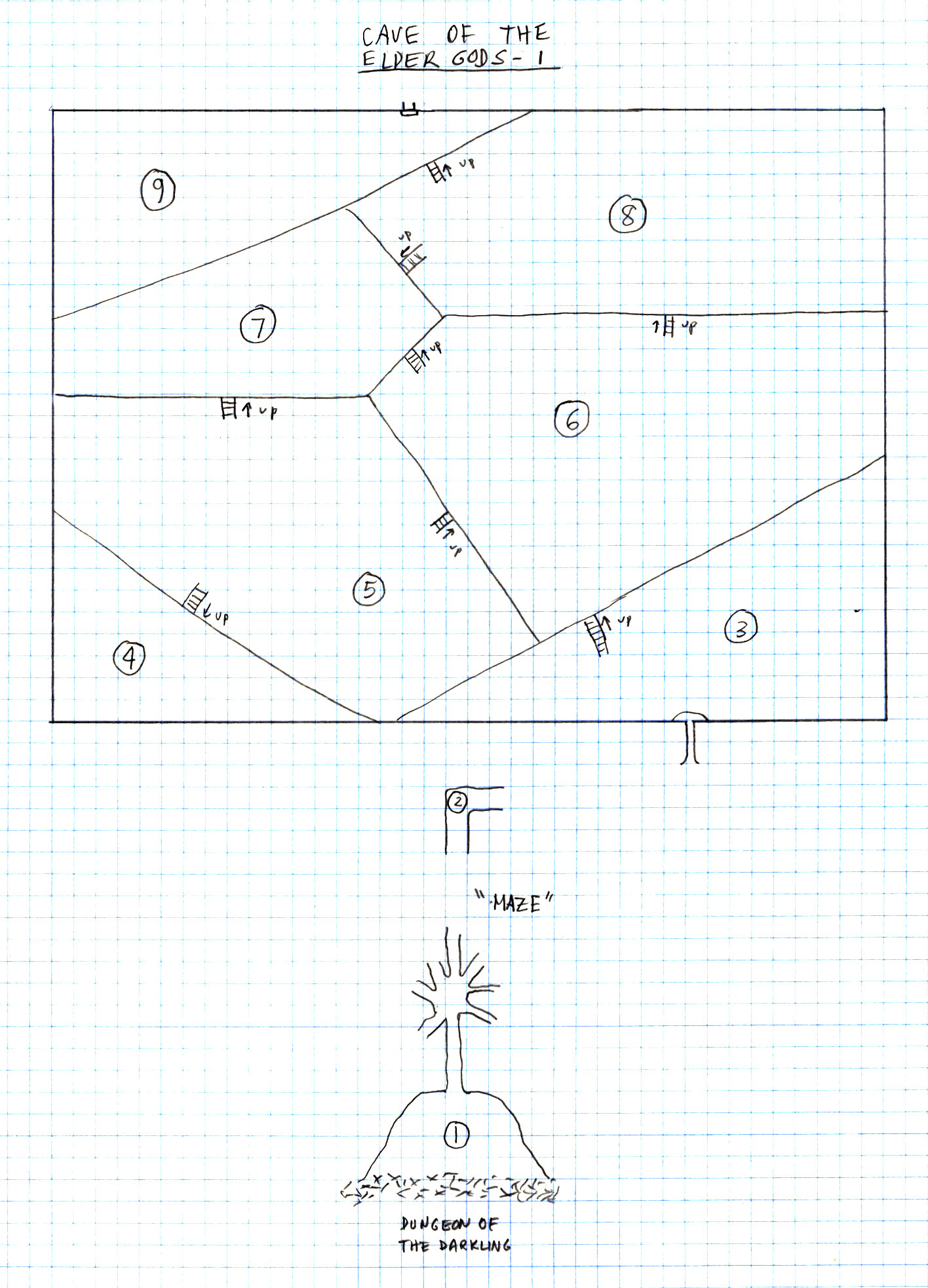 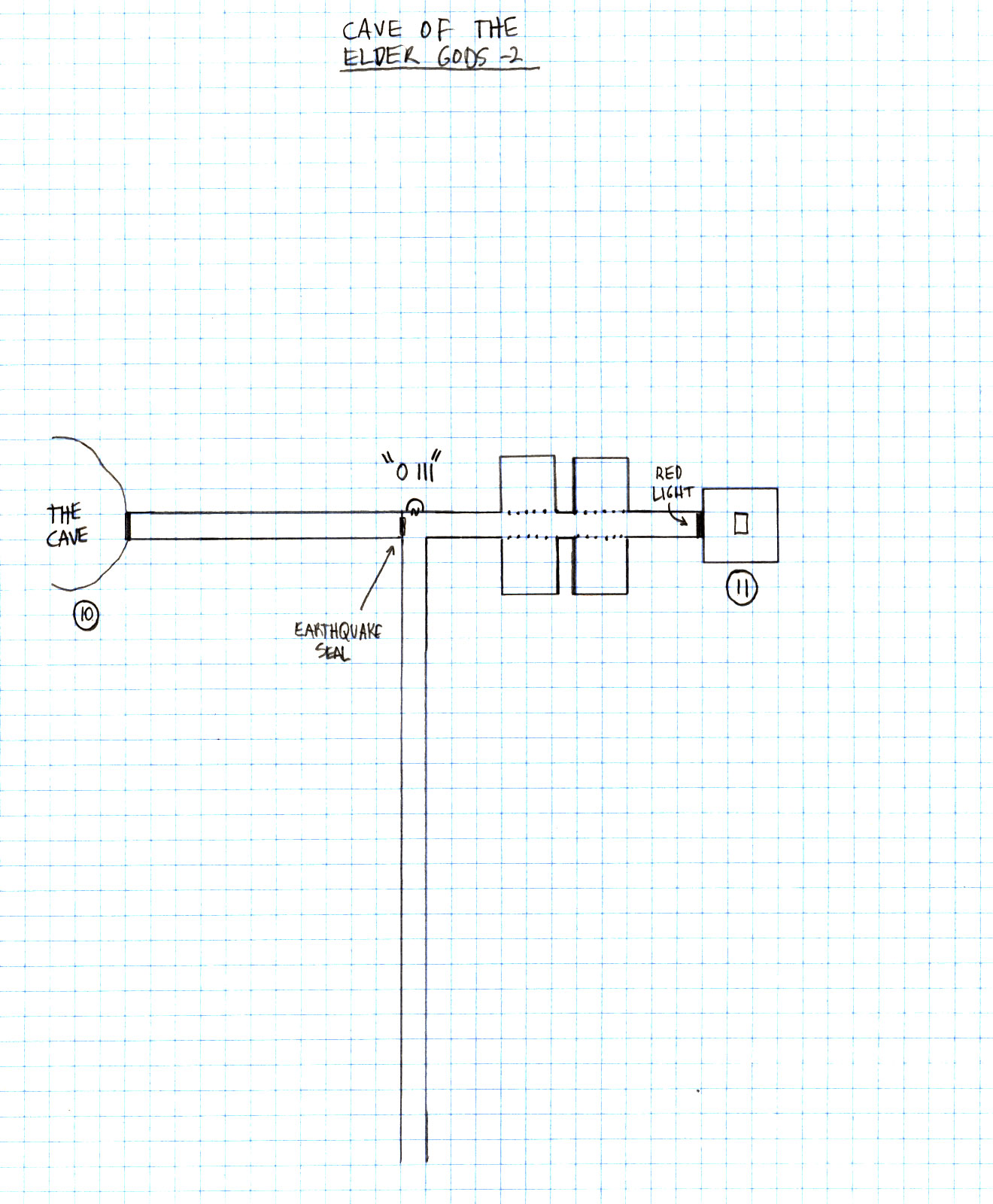 The walls of the Cave of the Elder Gods looks and feels like stone even though it is ancient wood. It will not burn easily, but a Speak with Plants spell will allow communication with the tree itself. This room is a rough-hewn cave burrowed into the tree. This room is guarded by magical thorns which are meant to keep out intruders. The party will notice that a path has been trampled down leading into the cave. The entrance is unremarkable except for the fact that the Rune Master is here with four medusae.

There are hundreds of passages that burrow through the tree, many of them made by a race of long-dead insect creatures. The passages are all very similar in size and shape, and it is easy to become completely lost inside them. By following the upward sloping ones, the party will only encounter Cluxall the Gem Master and his explosive gems.

This room holds a camp of demons which contains most of the remaining forces of the thirteenth covenenant. There is a large tent structure which houses Foultooth near the only set of steps leading up to the fourth tier. The area is teeming with cave wights, barrow wights, and ur-viles which have been organized into watch squads. It will be almost impossible to pass through this area unnoticed.

This room is filled with thin silver threads hanging from the ceiling every foot or so. These threads are metallic and filled with static electricitity. They will give any character touching them a slight shock (1d8). As soon a character with a metal object enters the room, the threads will begin to building up an electrical charge (denoted by a crackling noise). After 4 rounds, a lightning bolt will discharge at the most metallic character (18d8). In the center of the room lies a perfect oak tree with silver branches and red fruit. This is the body of Oakentree. While it has no intelligence of its own, it does have significance to several of the characters.

This room is dominated by a Stonehenge-like structure. This is identical to the summoning place on the Island of Godot. In fact, the ultra-powerful beings on Godot were prisoners taken to this world by the First Tribe. They have been placed here to help guard the entrance to the Cave of the Elder Gods. They will be summoned if any living creature enters into the area. Still living are: Corwin, Mammon, Belial, Duessa, Lucifer, Death, Storm, and Satan. They were rebound by the party when the Cledgel of Smiting (or was it the Rod of Hanapu) was broken. This was undone by the first tribe to bolster their numbers. As the Godot beings understand the significance of the Cave of the Elder Gods, they will attack the party on sight. Asmodeus, the Watchman, is not present.

This room is where Gruumsh and the orc army is camped. Like their demon counterparts, their is a large tent in the center of this area where Gruumsh himself resides. The orcs have established watches at all of the edges of this room.

This room has several large creatures made of stone and metal which resemble golems of a sort. Presently, they are crumpled in a ring near the middle of the room twisted like a six large discarded dolls. In the center of the circle is a black haze which seems to hang near the ground. The haze does not appear to move. It is roughly 15 feet in diameter. The puppets stand about thirty feet tall, and are almost impossible to destroy (since they are not living). Damage should be equivalent to trying to batter through a stone wall. The black haze is actually a reflective cloud from which the Puppet Masters can see out, but nothing can see in. They move their bodies, and their puppets mimic their moves. The Masters must move slowly in order to compensate for the size differential between them and their creations. The Masters are unarmed, unarmored, and fairly weak. The black haze has no protective properties.

Diramball-Ak-Ralikar is one of the most resourceful of the First Tribe (also known as Visniac the Collector). His now-famous hut is camped here. Not wanting to forgo his research, he has left guarding this area to large lions and tigers which prowl constantly looking for food. Diramball-Ak-Ralikar will emerge if a large commotion is noted. Any attempts to move into his hut will be disasterous, for it is actually displaced several feet from its real location. This will cause characters trying to enter to fall from the top step of the ladder.

This is the final room. On the northern wall is a seal that leads to the Cave of the Elder Gods. It has recently been placed there by Baradar himself. Opening the seal will cause time to slow for the opener (and all within 60 feet) - allowing all (or most) of the creatures from the first six tiers to accumulate here for the final battle. In addition to Baradar, the following creatures are present in this room: Xystus, Demogorgon, Doomcaster, and five priests.

Room 10: The Cave of the Elder Gods

This room cannot be entered, but the following creatures will come out when the door is opened:

This small room cannot be reached without the key hidden behind the symbol in the north wall of the entrance tunnel. Without the key, the party can move down the hallway, but a distance distortion will occur that will make the hallway stretch on for miles. This distortion will occur when the party is even with the cages. In these, they will see their greatest fears, and greatest hopes. If they enter into the cages (which are unlocked), they will be trapped forever.

In the final room, their lost treasure from the Troll's Bridge will be found. The treasure is, at this point, protected only by the seal with the red light. This seal causes all spells to fail, but it does no damage to persons opening the door. Clever players will notice that the entire east wing of the Cave is of new construction.