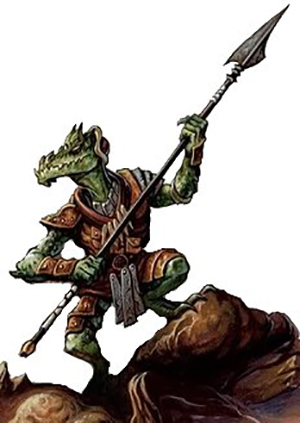 The diminutive kobold is the smallest of the lizardfolk from the Forbidden Lands. Most stand around 3 feet tall and weigh about 35 pounds. They have powerful jaws for creatures of their size and noticeable claws on their hands and feet. Kobolds’ thick, scaly hides vary in colors from green to brown. Contrary to popular belief, kobolds are not merely runts or castoffs of their larger cousins. They are a separate race which are the genetic predecessors of the lizardfolk. Known in the Forbidden Lands by their caste name, malius, the primary differences between kobolds and lizardfolk are their size and the lack of an evolved tail capable of assisting with jumping and balance.

Many believe that kobolds are not as gifted as the other castes, although this is not always true. Downtrodden, most kobolds serve the community as laborers working in vast warrens beneath Ssruthu - far from the light of the sun. Some kobolds, however, have powerful magical abilities and gain favor with the ruling classes as magicians, sorcerers and priests. Others show aptitude with mechanical devices and mining. Kobold tactics specialize in traps and ambushes, but kobolds look for battle advantages that avoid putting themselves at risk. This has led to a general misunderstanding that kobolds are craven.

Most kobolds proudly claim kinship to dragons. They hold power in high esteem and will oftentimes be found as loyal followers of powerful creatures - especially draconic ones. Adventuring kobolds sometimes are found with lizardfolk on missions for their country, but most are loners - looking for companionship in less judgmental races. Many seek some connection to their draconic roots, while forming close bonds with their traveling companions.