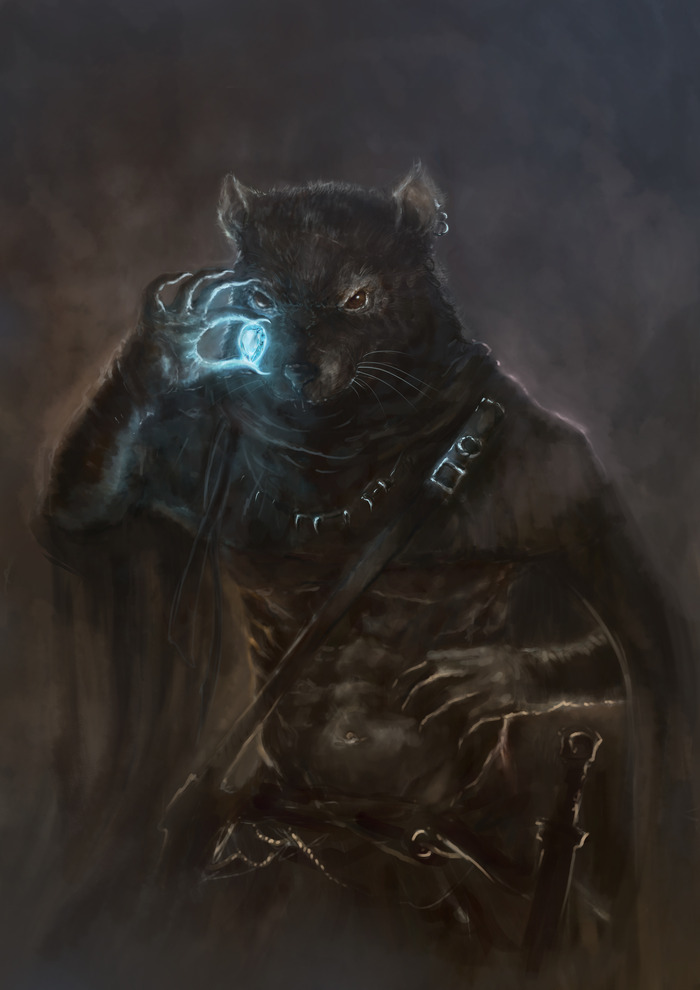 Ratfolk are small, rodent-like humanoids of the Tang Empire. Shorter and thinner than most humans - averaging four feet in height with a weight of eighty pounds - ratfolk typically have whiskered snouts and long scaly tails. These distinguishing features make them easy to identify, although many wear loose hooded cloaks to blend in more easily when traveling outside the Empire. Ratfolk have a strong attraction to shiny jewelry, especially copper, bronze, and gold, and many decorate their ears and tails with small rings made of such metals.

The ratfolk are counted as the best sailors in the Realm - being exceptionally nimble, fast and able to survive on limited rations for long periods of time. Ratfolk are also shrewd merchants who carefully navigate the shifting alliances of black markets and bazaars throughout the Realm. The Tang Empire trading network is based on a thousand years of rule by a lawful line of Emperors who demanded strict adherence to contracts and rules of commerce. As such, ratfolk are generally trusted in the ports of Realm, and friendships between ratfolk and other races is common.

In 905 TA, the arrival of the chaotic Emperor Kaji and the growth in black market trade of the hallucingonic warpstone dust has introduced some suspicion around the Tang ratfolk.

Although generally friendly with other races, there are few ratfolk communities outside the Tang Empire. Ratfolk merchants are tied to their ship, their noble House, and their Emperor - all which dissuade living abroad. These are strong bonds which are rarely broken.

Adventuring ratfolk are often driven by a desire to seek out new opportunities for trade for themselves, although many adventuring ratfolk have been banished by their society - usually for breaking the strict Tang codes of law. In addition to prowess in sailing, adventuring ratfolk have shown great skill in subterranean and city settings - using their superior agility and speed to act as thieves, assassins and rogues. Mages and wizards are known among the ratfolk, although they tend to shun traditional religious organizations. Ratfolk tend to settle disputes with mutually beneficial trade, but they can be fierce and unusually resourceful in battle.