Nearly three hundred years ago in the time of Bargal, son of Elzric, ruler of Ariandor, there existed a time of peace and prosperity among the villages of the the rim. In the long history of Ariandor, it can be said that the decades of Bargal were the most enlightened with respect to music, poetry, and drama. And it was in those years that the Sylvan Glades were built. The glades formed natural amphitheater high in the hills of the southern rim. The caves beneath the outdoor stage were home to many of the greatest actors, singers, and poets of the time. The troop was led by Folkfeld of the Silver Tongue, and their productions went on throughout the year. Because of the great distances that needed to be travelled, Folkfeld employed the wizard Eiderberry to create a network of teleport devices triggered by beautiful crystal pyramids. In such a way, the nobles and important dignitaries of the land could travel to the plays and performances without journeying by mounts. Eiderberry was staggeringly successful, and so were the Sylvan Glades. A vast treasure house was reported to have been build within the catacombs below the stage. And so prosperity reigned until the time of war between the three feudal lords.

When outright wars broke out among the three feudal lords, the Sylvan Glades suffered. However, the minstrels of that neutral ground never expected the terrible raid which occurred almost twenty years to the day of the first performance at the theater. Rue the Green attacked the Sylvan Glades in order to capture the coffers (for his sagging war chests) and the key map of the teleport devices. With the map and a stock of unused pyramids, Rue thought that he could teleport into the castles of his enemies and allies at will. The outcome of the Raid on the Sylvan Glades is uncertain. Immediately thereafter, the performances stopped at the stage. However, it is rumored that Rue the Green did not capture his desired booty. Instead, it is said that he unlocked the gate to a terrifying demon which killed his entire party and still roams the underground passages of the Sylvan Glades. Local experts will tell you that no person has visited the glades for nearly two hundred years, since an adventuring party entered the area to search for the headdress of the Eagle God, Duranthus Dur.

Adventures in The Sylvan Glades

The party decided to wait until Hylax could explain himself before stringing the little gnome up by his ears. Instead, they pushed another side of the pyramid and teleported to the Slyvan Glades. Ernie has outlined this adventure on Maps 19 and 20. After some mundane encounters, the party fought some Gnomes of Melding who were able to form themselves into a formidable giant. U-Gene cut them down to size, and the party continued to descend. The party was trapped in a demon's maze that almost wasted the hapless adventurers, but a great expenditure of magic saved them. The party left the underground maze and returned to the surface. After some searching, the party found a path into a workshop (of Eiderberry?) where they followed an unidentified man onto a teleport pad. The device led the party into a room filled with illusionary hallways and walls. Vince was killed by a massive fireball, but the party was able to chase the mysterious man back through the teleport. The man cast a fly spell and moved to the north (away from the Sylvan Glades), and the party quaffed potions and cast spells to follow. 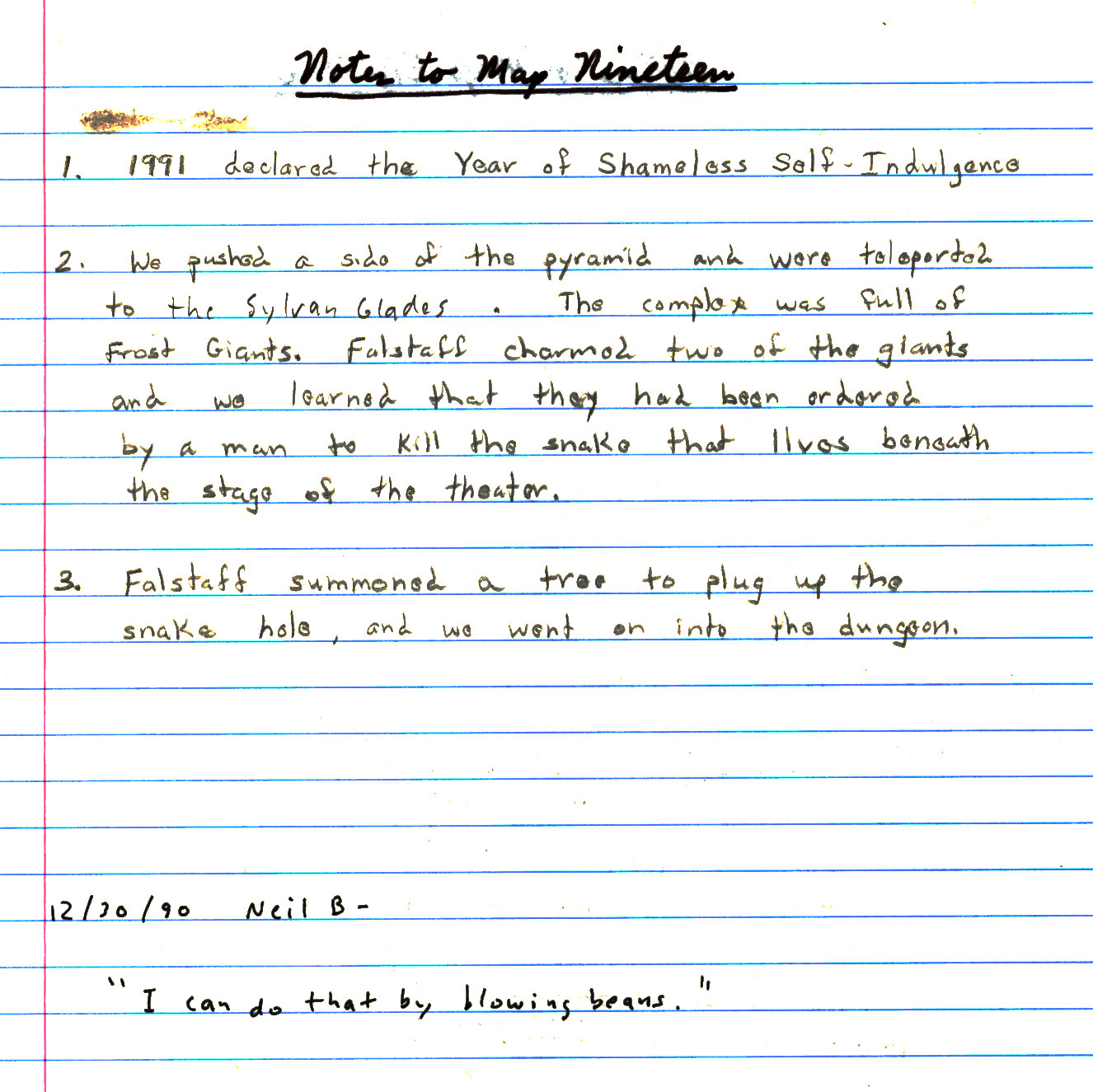 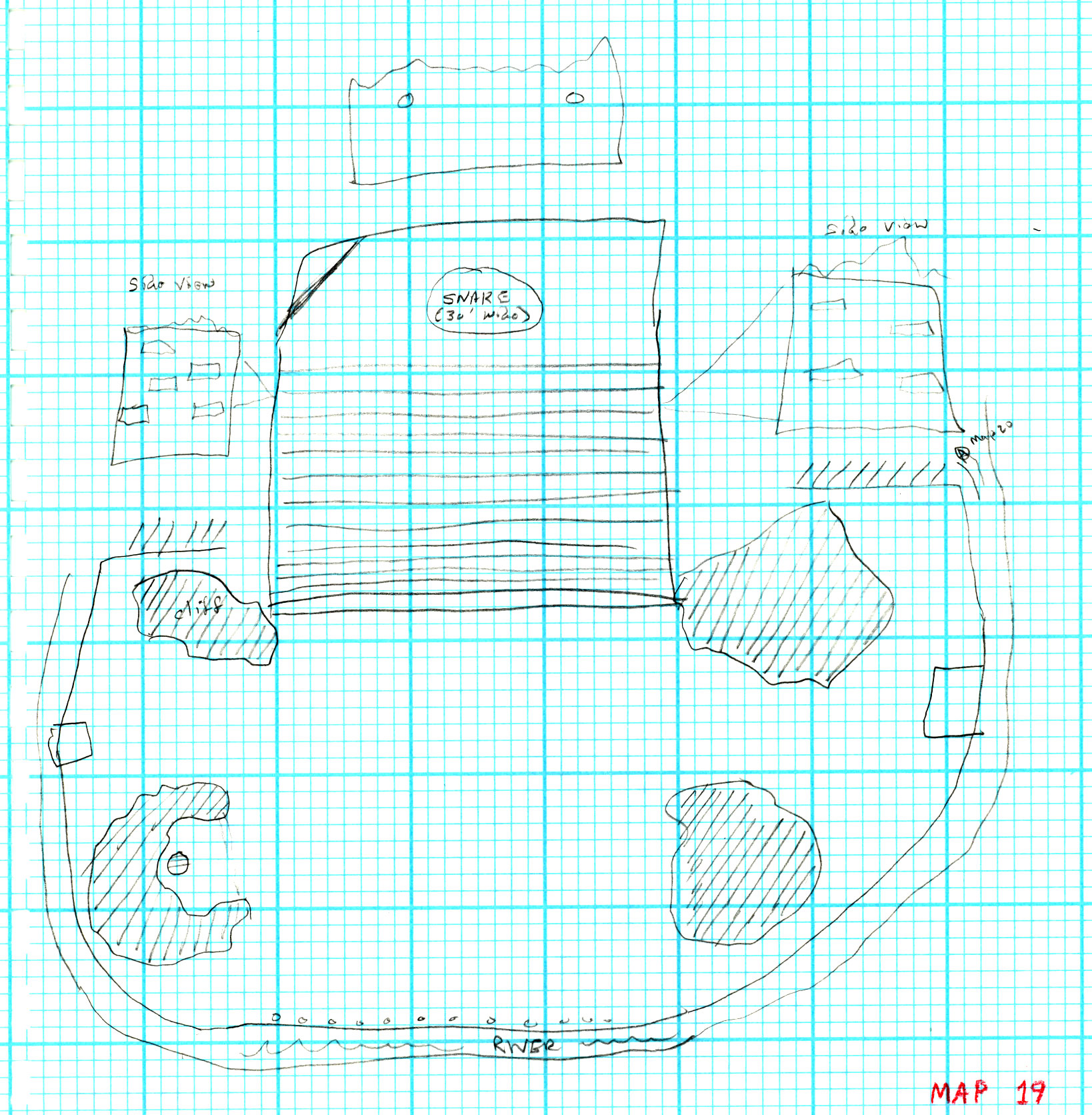 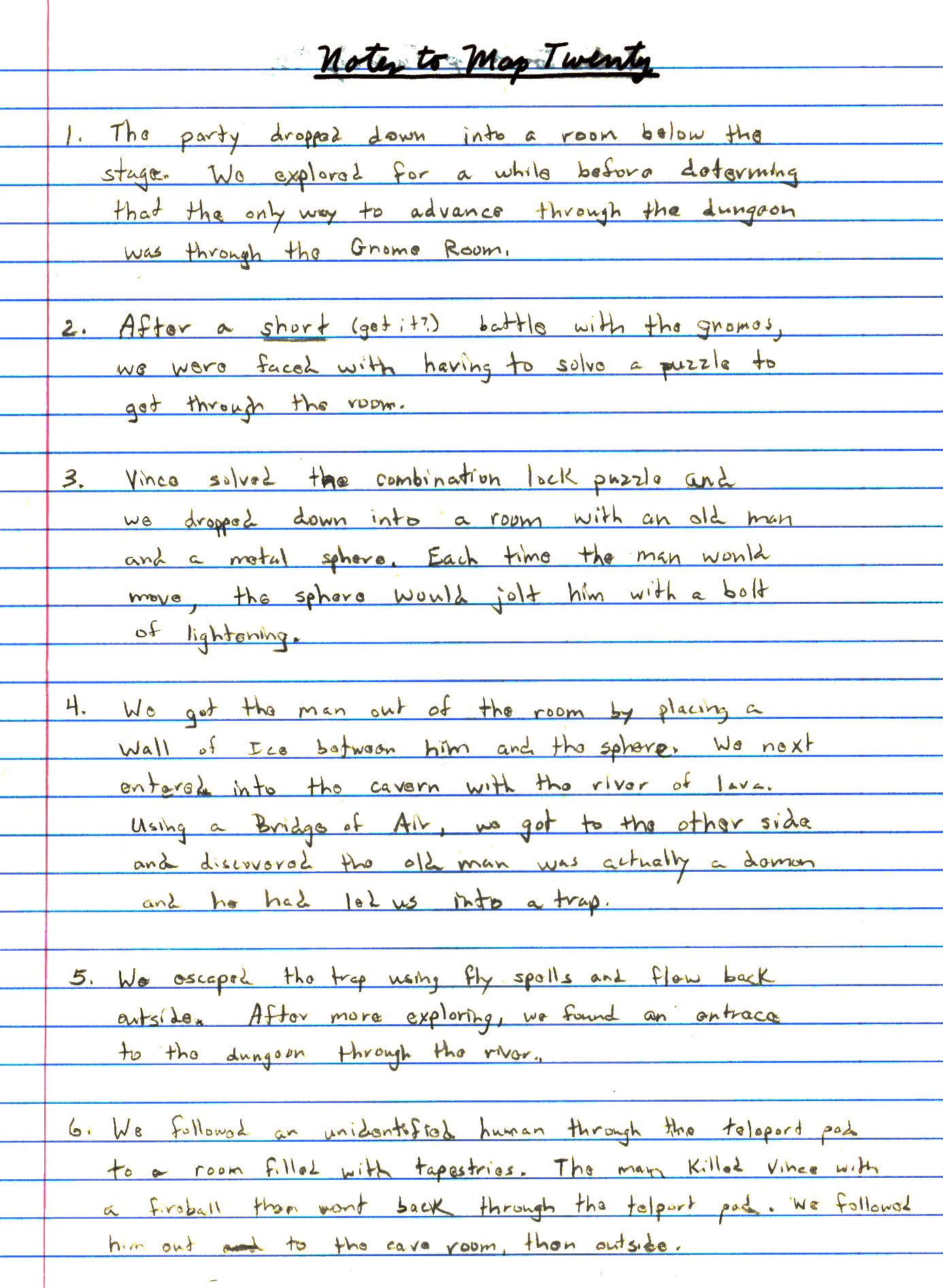 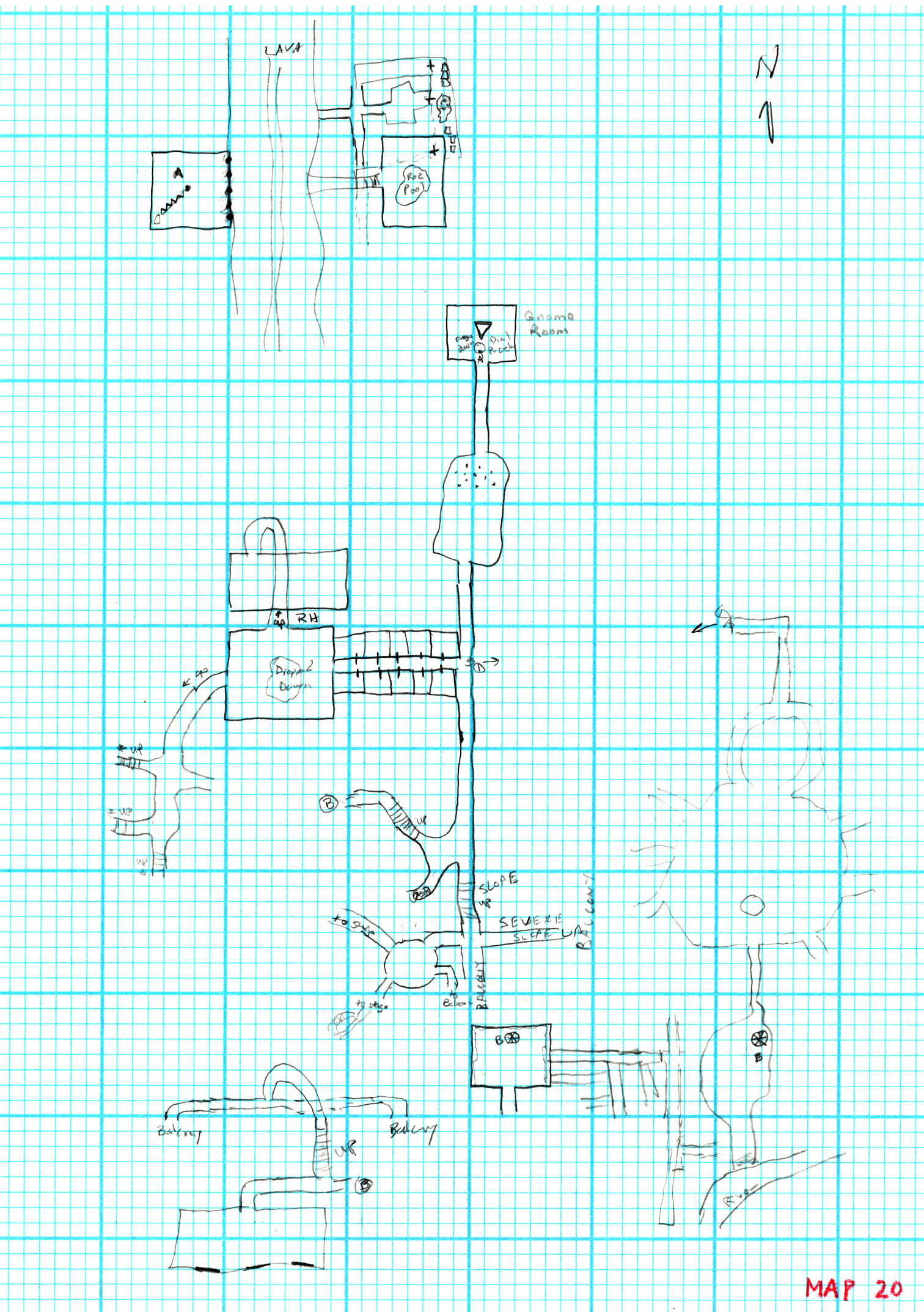 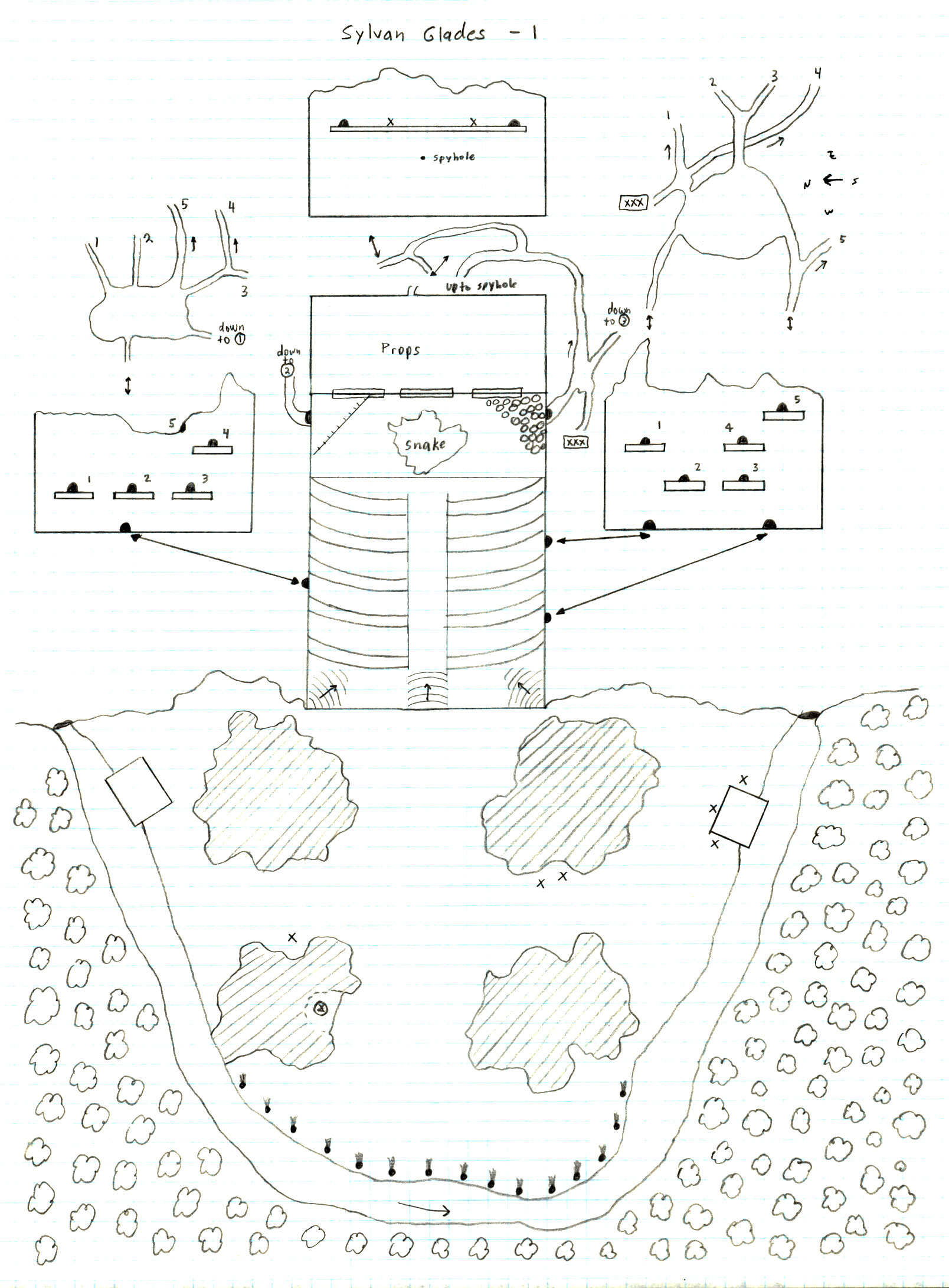 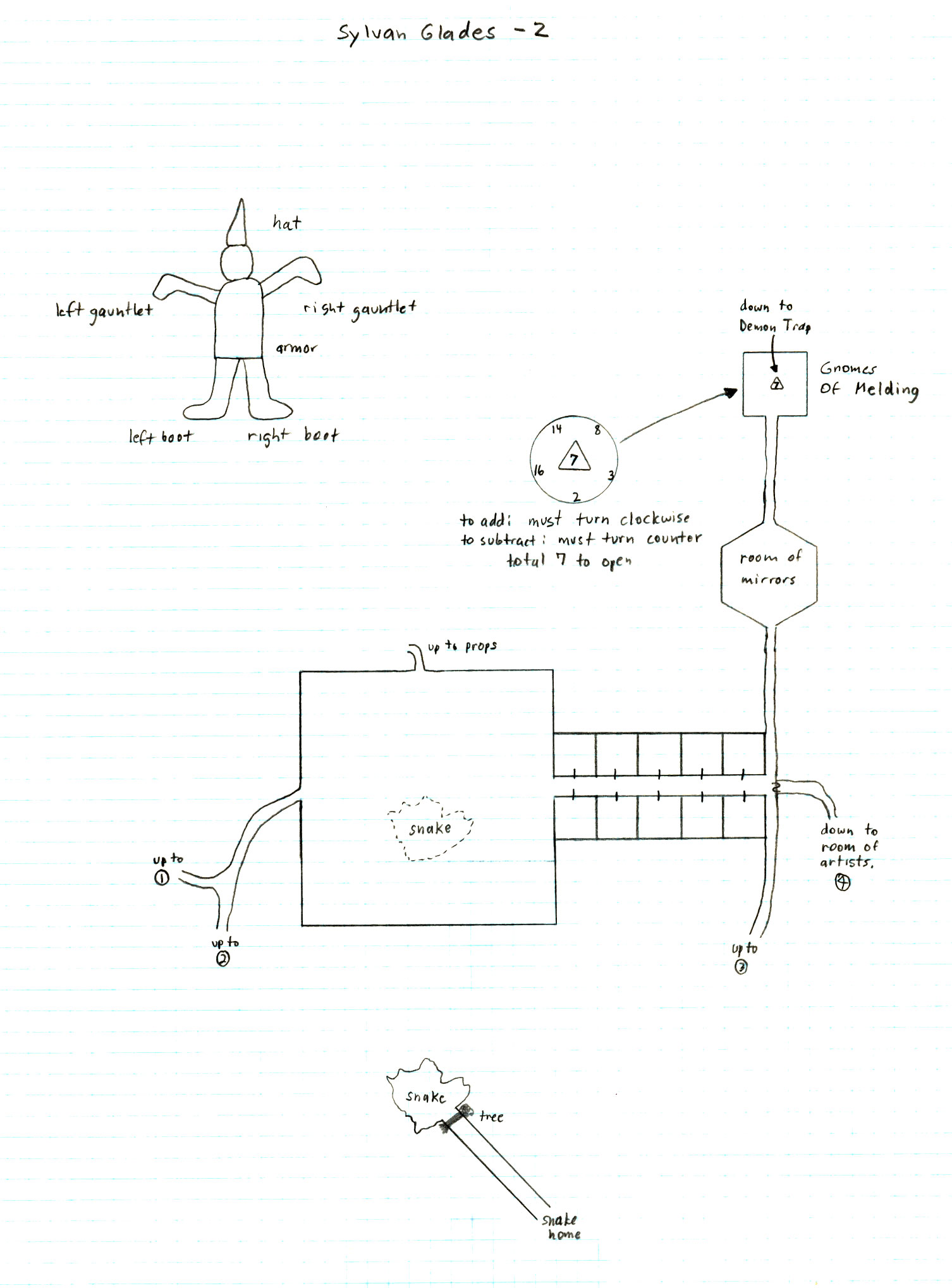 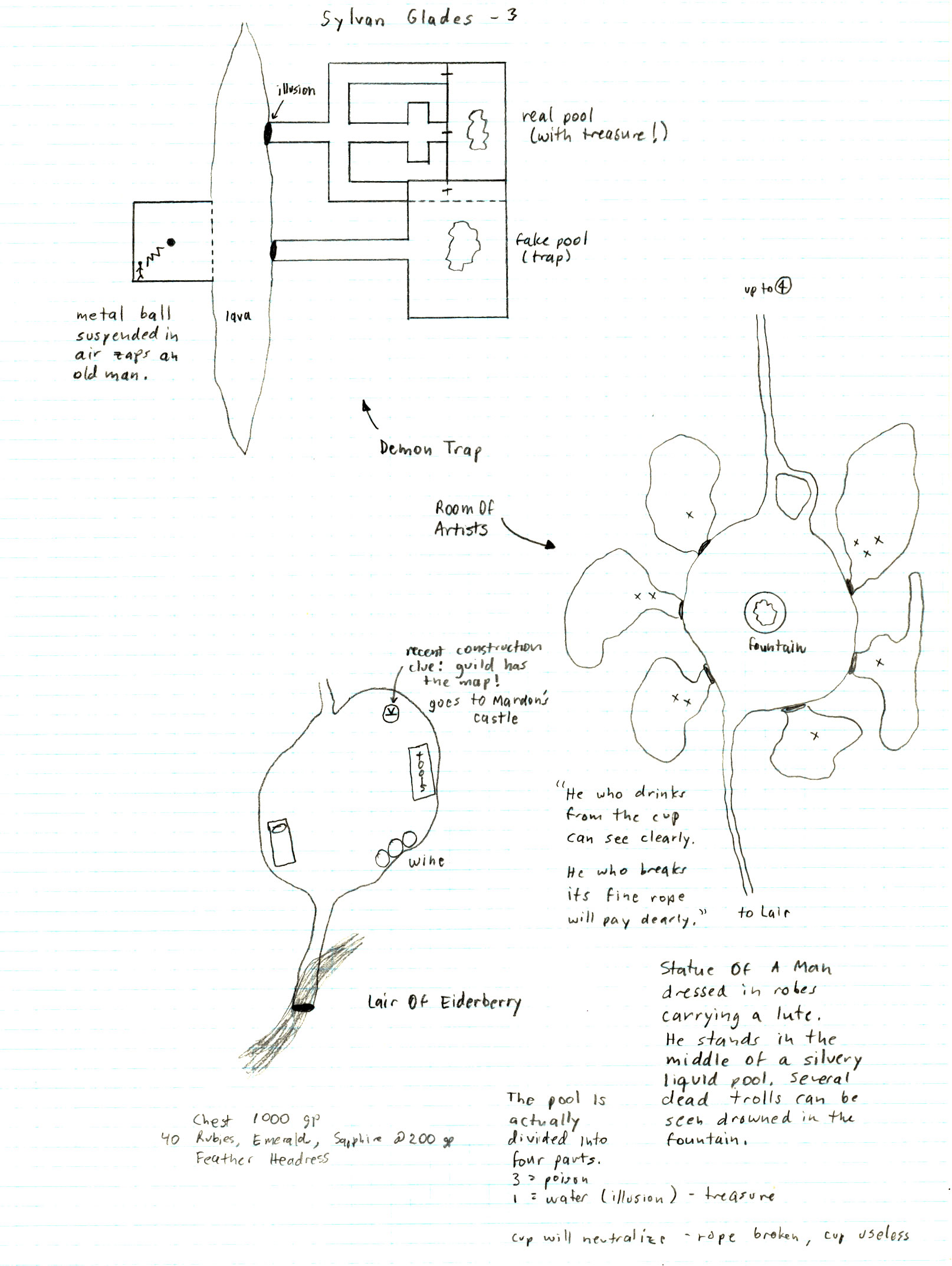 Outside, the Sylvan Glades is being sieged by a troop of frost giants under the control of Tarmildin. This wizard is trying to find the treasure of Eiderberry (pyramids) and the treasure of the Folkfeld (gems and jewelry). He has recently arrived to find a snake guarding the stage area of the complex. The underground caves have three major areas: a demon trap guarded by a puzzle (under seige by some Gnomes of Melding), the lair of Elderberry, and the rooms of the artists. It seems that Rue the Green did open a demon trap, but the demon was sealed again by Eiderberry only after the entire complex was killed off.

The snake that guards the entrance to the dungeon is AC 5, HD 30, 4d8 points of damage + poison. The bite requires a saving throw against poison at "-4". Success means 32 points of damage, and failure means death. The snake can spit poison 40 feet. Size huge.

This wizard is a freelancing mage that lives in Carendell. He left a month ago to find the two great treasures of the Sylvan Glades. So far, he has been unsuccessful. Tarmildin is a MU of the 15th level. He has the standard spellbook, AC 6, no attacks, size medium. He commands the frost giants through his Amulet of Frost Giant Control.

The dung eater crabs are AC 0, HD 5, 1d8/1d8 points of damage, size small. They will attack anything that lands on the beach.

The demon of lightning appears as a wizened old man who is sitting in the corner of a room (being shocked by lightning from a mysterious globe in the center of ther room). The party will have to "save" the old man, and he will lead them through the portculis at the far side of the room. The caves beyond are actually a trap to gain new souls for the demon. The old man can polymorph into his "demon" form at will.

The demon is a MU of the 20th level. He has the standard spellbook with all lightning and fire spells, AC 9, no attacks, size medium. He will summon the fire mists and the Demons of the Mists when the party gets to the trap.

The bats are AC 4, HD 12, 4d8 points of damage, size small. They will attack the party (including the old man).

Demons of the Mist

The demons are AC 4, HD 12, 6d8 points of damage, size small. They will attack the party when summoned. It takes six rounds for them to coalesce. They are immune to heat, but they are greatly affected by cold.

The trolls are living in the caves that were once used by the players and troop members. The trolls are AC 4, HD 10, 2d8/2d8/4d8 points of damage, size large, regenerate 3 hp per round.