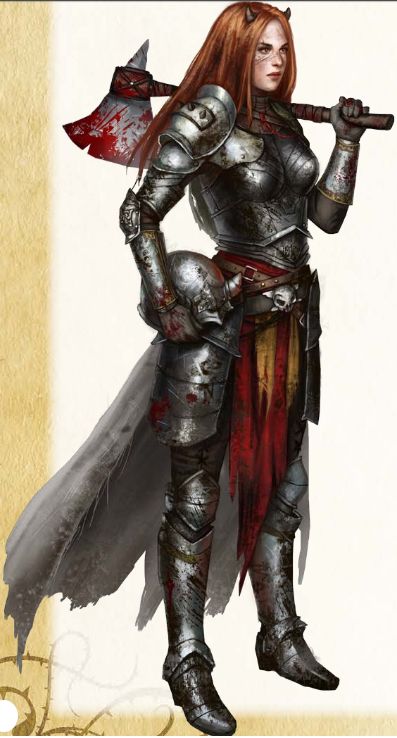 Tieflings share a demon and human ancestry. It is believed that most tieflings are offspring seeded by the marauding armies of the Demons of the Covenant during the First Demon War (663-666 SA) and Second Demon War (821-828 TA). A recent increase in tiefling adventurers in the Reaches correlates to the first-generation offspring reaching maturity at the beginning of the tenth century TA. Most tieflings never know their fiendish sire. Some rumors hold that only Giant Ravers can sire human-demon offspring.

It is said that no two tieflings look alike; the fiendish blood running through their veins manifests inconsistently, granting them an array of fiendish traits. Although these taints are long-lasting and persistent, they usually manifest at birth as a powerful, though often unwanted, boon. One tiefling might appear as a human with small horns, a barbed tail, and oddly colored eyes, while another might manifest a mouth of fangs, tiny wings, and claws. The vast flexibility in tiefling appearance is a thing of wonder, running the gamut from oddly beautiful to utterly terrible. Despite their fiendish appearance, tieflings have a human’s capacity of choosing their fate, and while many embrace their dark heritage and side with fiendish powers, others reject their darker predilections. Though the power of their blood calls nearly every tiefling to fury, destruction, and wrath, even the spawn of a succubus can become a saint. All Tieflings known the Tiefling language innately without needing to be taught.

Because of their history, tieflings are often shunned and despised out of reactionary fear. The Second Demon War is still fresh in the minds of the long-lived races of the Reaches. Tieflings are sometimes called "the homeless" as they have no villages or towns - their true homeland unreachable through the Void. Instead, they live on the fringes of the land. Tieflings seldom see another of their own kind, and thus they usually simply adopt the culture and mannerisms about them.

Most tiefling adventurers are drawn to the adventuring life as a method of escape. They hope to make a better life for themselves, to prove their freedom from their blood’s taint, or to punish a world that fears and rejects them. Skilled at magic, stealth and combat, a tiefling will rarely choose a profession that draws attention, but will often excel in clandestine undertakings.