It was decided in the ancient days of old, before the beginning of the Dragon Wars, that a great house of learning was to be built. This university would house the greatest students, books, and teachers in the land. And so it was that the great astronomer Calib Clubfoot was chosen to be the Master of Woodbury, the great house of learning. In his 210 years of teaching, Calib instructed not less than ten classes of students, the brightest in the land, in the practices of philosophy, art, and science. The students that left the hallowed halls of Woodbury became the great leaders of the time. However, the ancient site became too crowded and eventually the deans were forced to administer exams to the children who sought entrance into the institution. And so it has been for almost five hundred years.

Every twenty or thirty years, the Merchant's Guild announces that the hall of Woobury will be opened to a new class of students. Excitement mounts as the caravans slowly make their journey around the rim in search of bright and talented students. The merchants administer the exams, and the brightest (young and old) are taken away. In the tradition set forth by Calib, the students will remain at Woodbury for twenty years or more studying. As a final project, the students will choose a site in the honeycombs beneath the hall and build a class exhibit. These projects take on many forms and themes. They are to represent the knowledge and experience that the students have gained. The scholars often dabble in black magic and the occult in order to make their projects the best.

Woodbury is located on a tall spire in the northeastern part of Ariandor. The site where Calib Clubfoot choose was once a nesting ground for the large bees that inhabited the area. However, the bees are thought to be long gone. On top of the hives, the hall and library of Woodbury were built almost five hundred years ago. After the graduation of Calib's tenth class, a new Master was named. Samantha of the Scaled Cloak ruled with an iron fist. The students claimed that her cloak had the magical property of invisibility as she was known to sneak up on her pupils with regularity. The iron rule of Samantha was a prosperous time for the community, and she was well-respected and liked. After nearly seventy years of leadership, her third class graduated, and Samantha retired to search for the legendary headdress of Maghattis the Clairvoyant. In her place, Hubert the Ponderous took over as Master of Woodbury. Hubert was a fat bulbous man with a very quiet disposition. He spoke very little and spent hours in isolation. He has ruled Woodbury for almost 120 years, although his fourth class graduated almost 40 years ago, and his fifth class has not yet left the walls of the institution.

It is rumored that the entirety of Woodbury has been taken over by a nomad berserker known as Barker the Burner of Books. He is said to be in league with the Dragon Lord Tienwerbaktur, Ruler of the Kreldar. When questioned, the merchants feign ignorance of the happenings of the Masters of Woodbury.

The party arrived in Briar Forest understanding that they were not very adept at getting around the pit. Without a Merchant's Badge (and the knowledge to use it), they would have to rely on the teleportation pyramids for travel. They traded pyramid #1 for pyramid #4. Since pyramid #1 was still active, they teleported back to Dragonsford taking Hylax's blank pyramid with them after drawing a rune in their room at the inn. In Dragonsford, our clever adventurers carved the pyramid, drew the second rune to return, and activated Hylax's pyramid. Thus, the party was able to trade the almost-depleted pyramid #1 for an unused pyramid #4 without giving up their only way home. This gave them four random shots at getting to somewhere. Hylax and Tuatha stayed behind in town while the other five went on their first adventure.

The adventure at Woodbury Hall is outlined on Maps 14 and 15. The dungeon was a series of honeycombed projects set under a castle. The projects were entertaining, but the party avoided most of the traps set for them. They reached the far end of the dungeon and realized the last class would never graduate (they were dead). After a brief encounter with some bees the size of large dogs, the party returned to the top level of the dungeon. There, they found a copper dragon, a Dragon Lord, and sixty Kreldar. In one of the most convoluted plans ever, the party managed to steal the Cloak of Tien and return to Briar Forest. Fuzzwort sent a message that a great library was being pillaged. 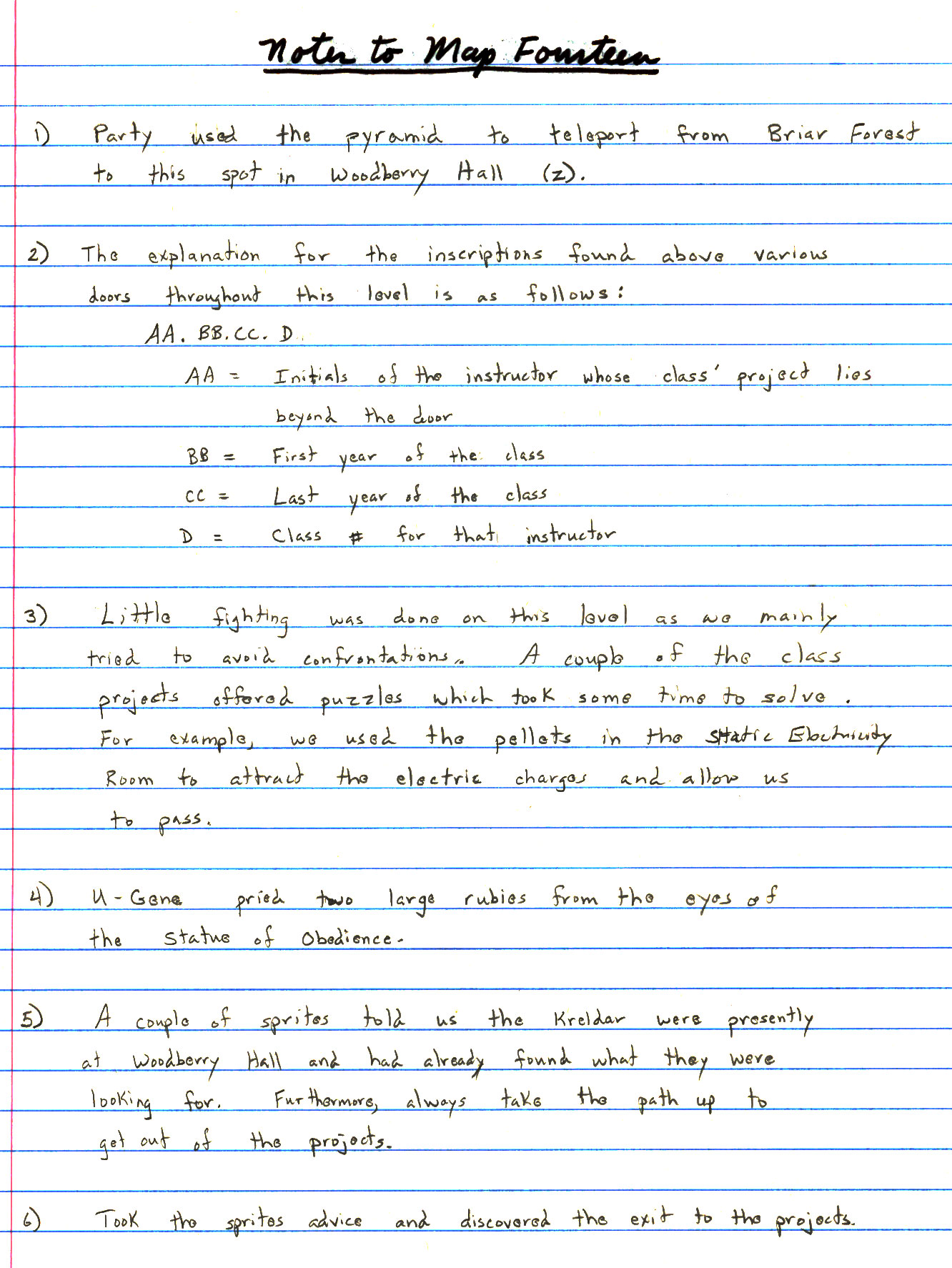 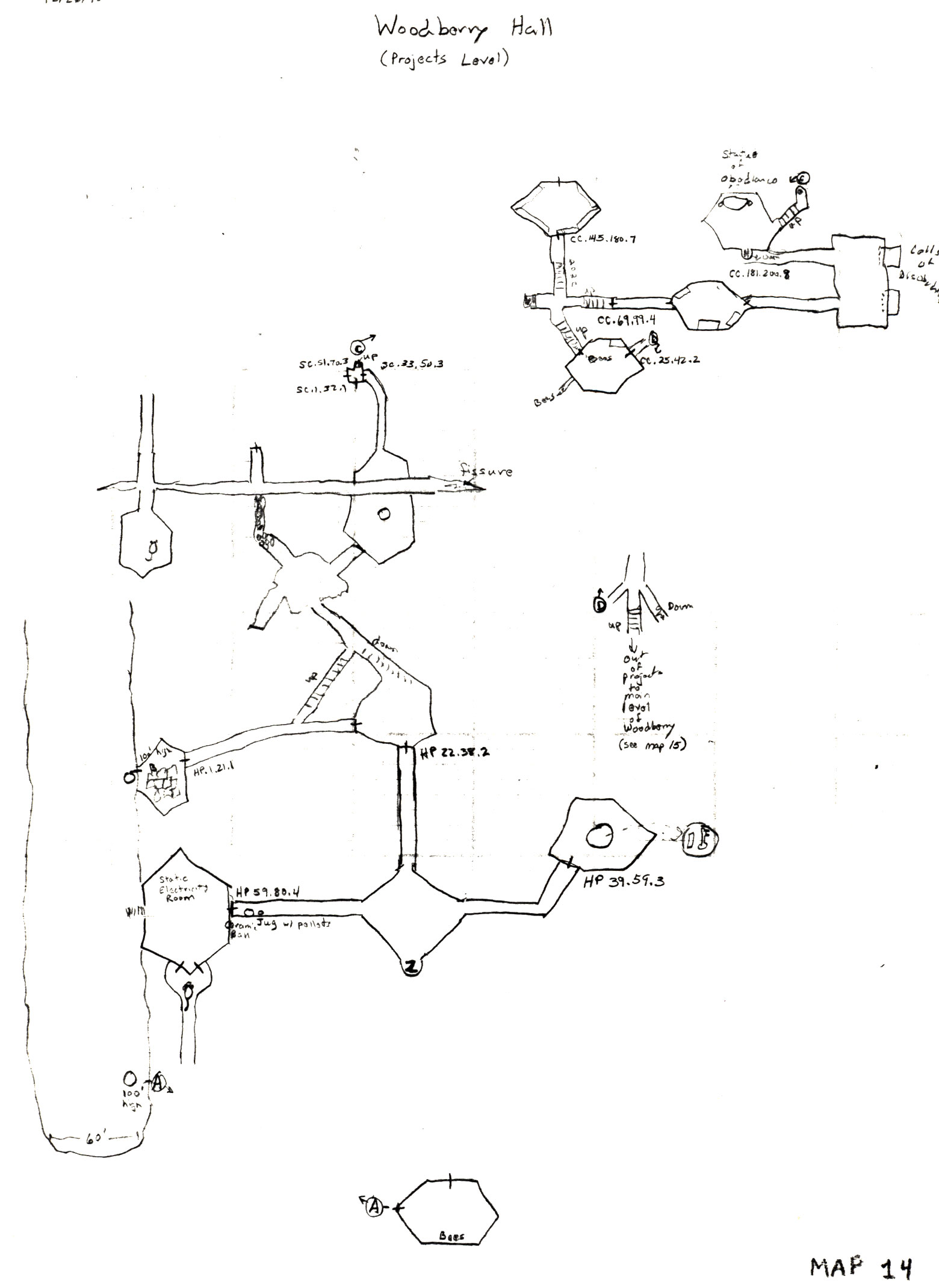 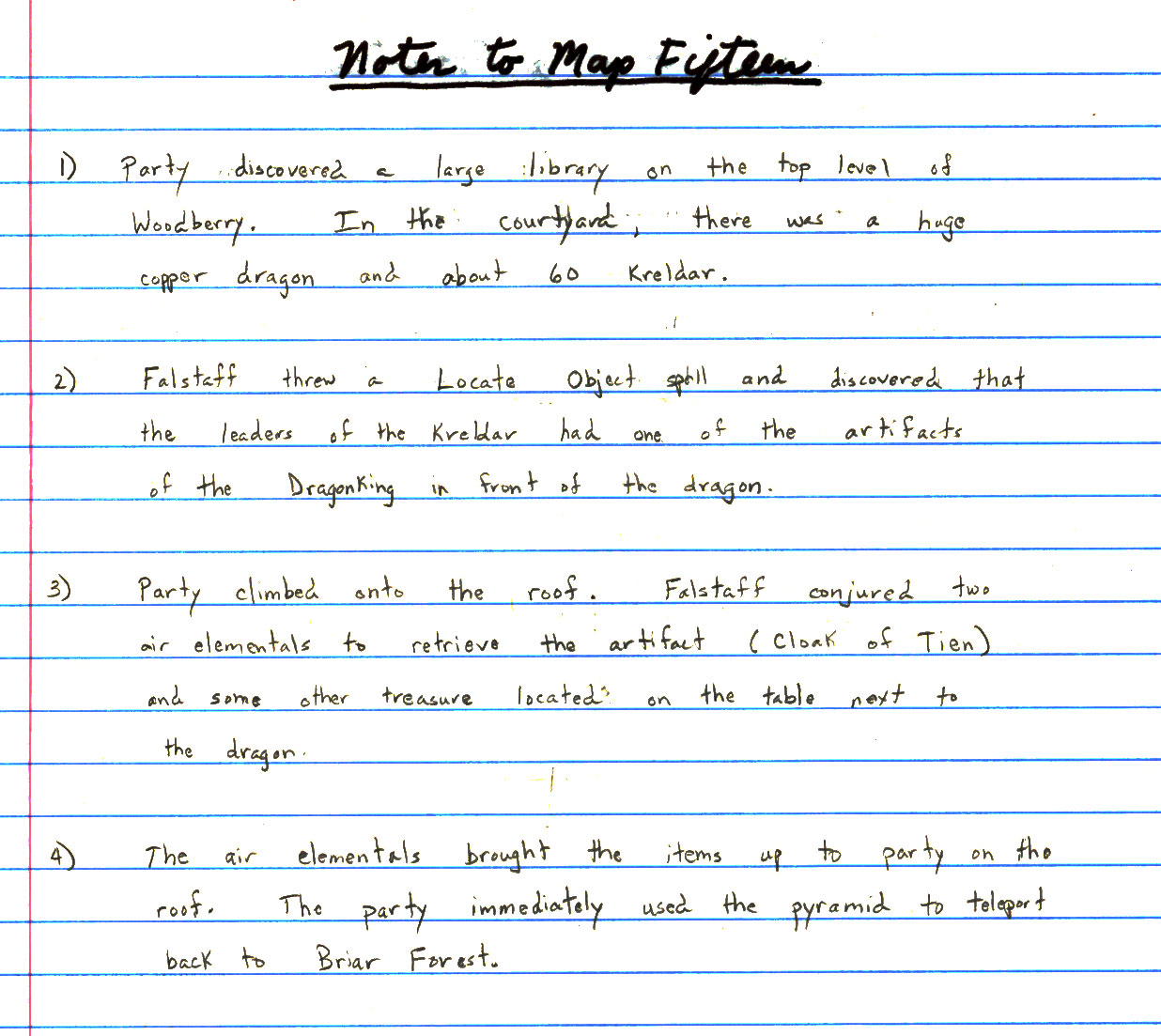 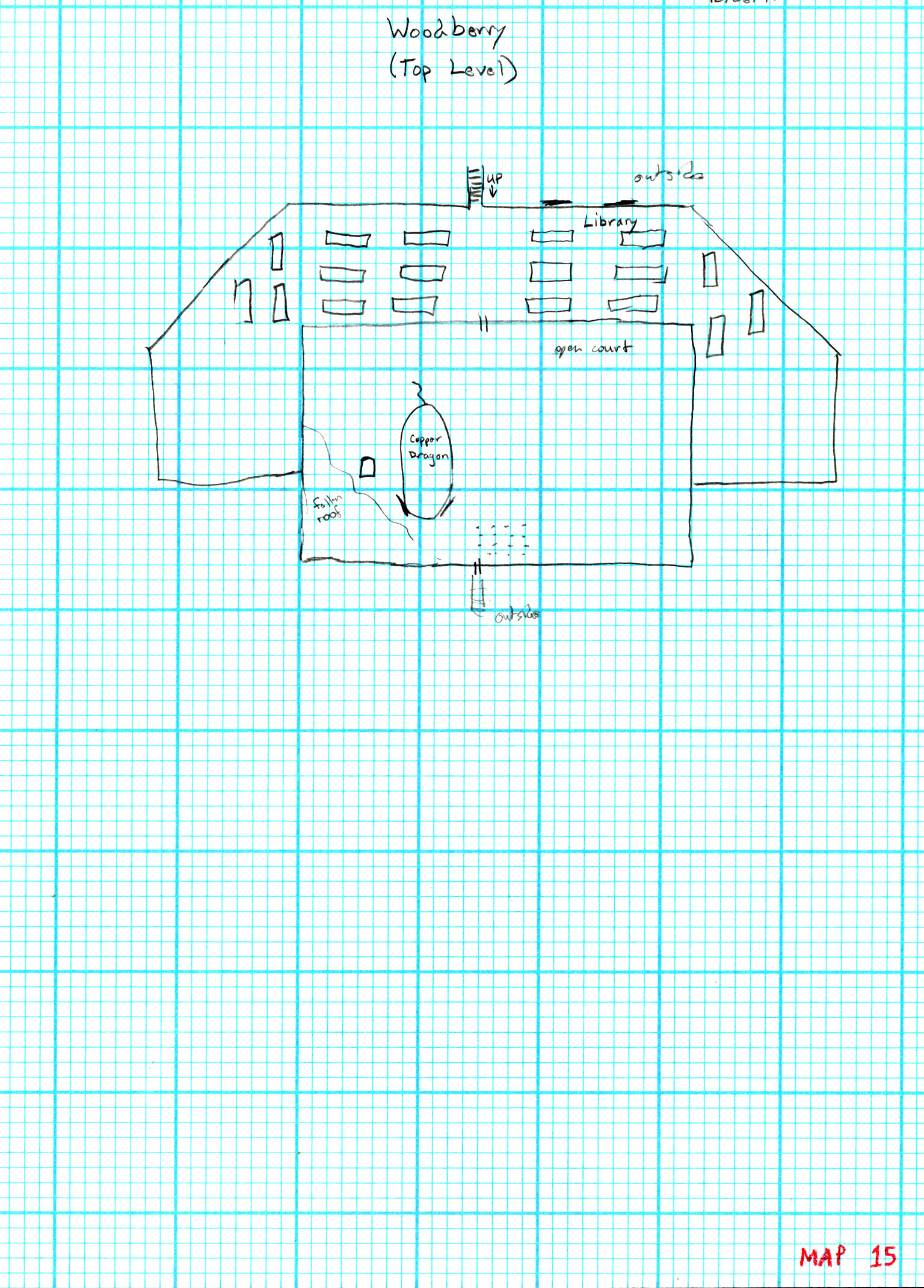 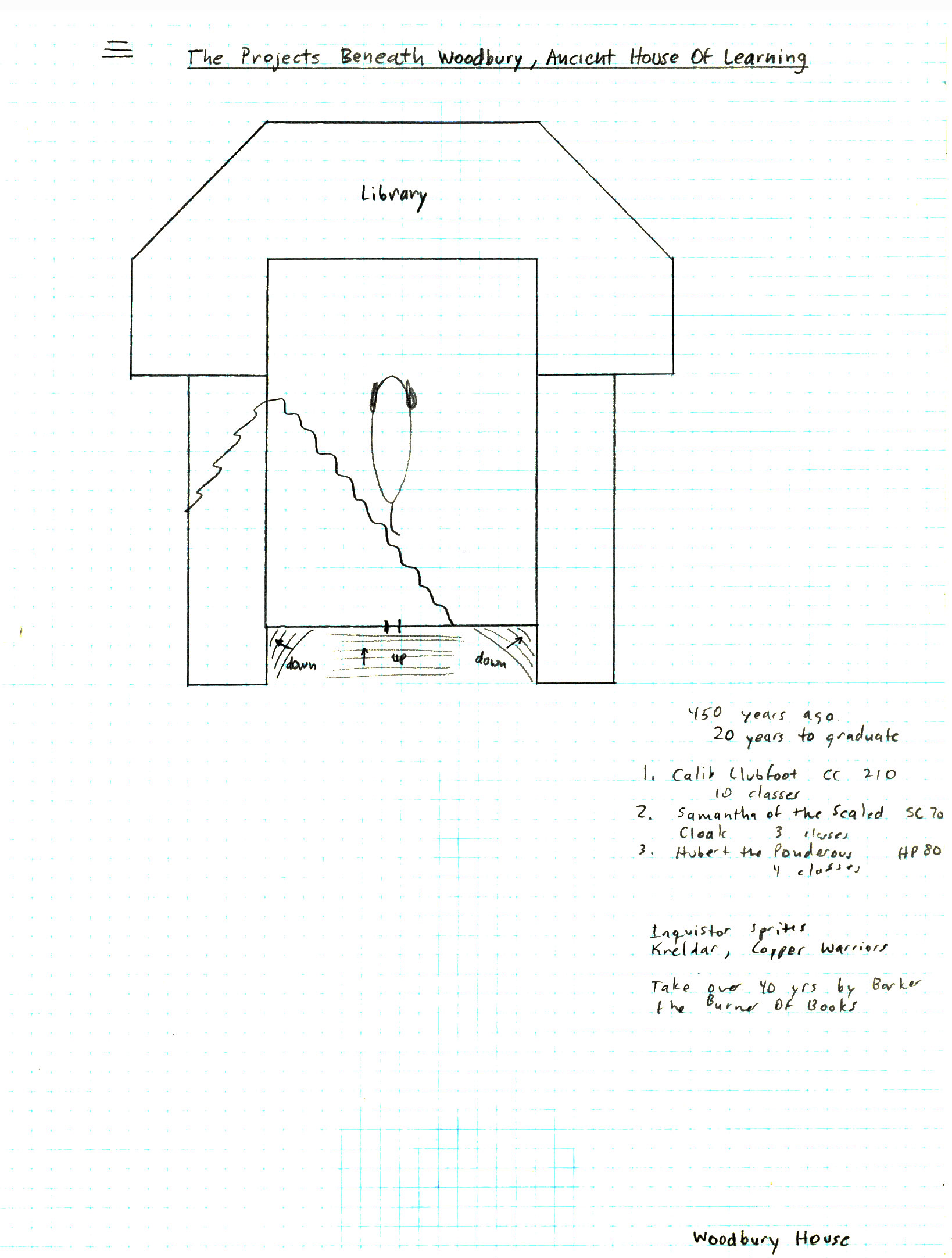 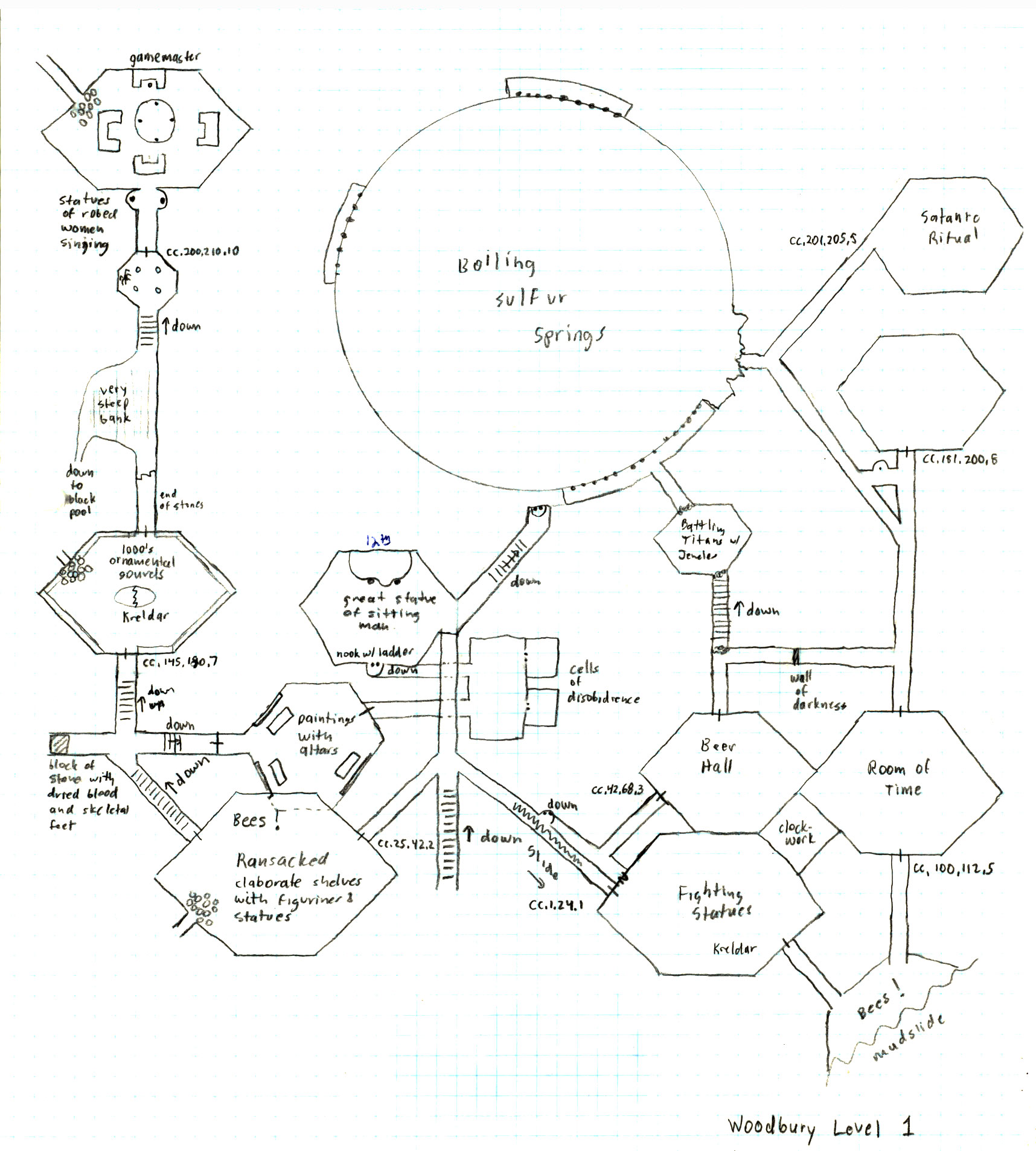 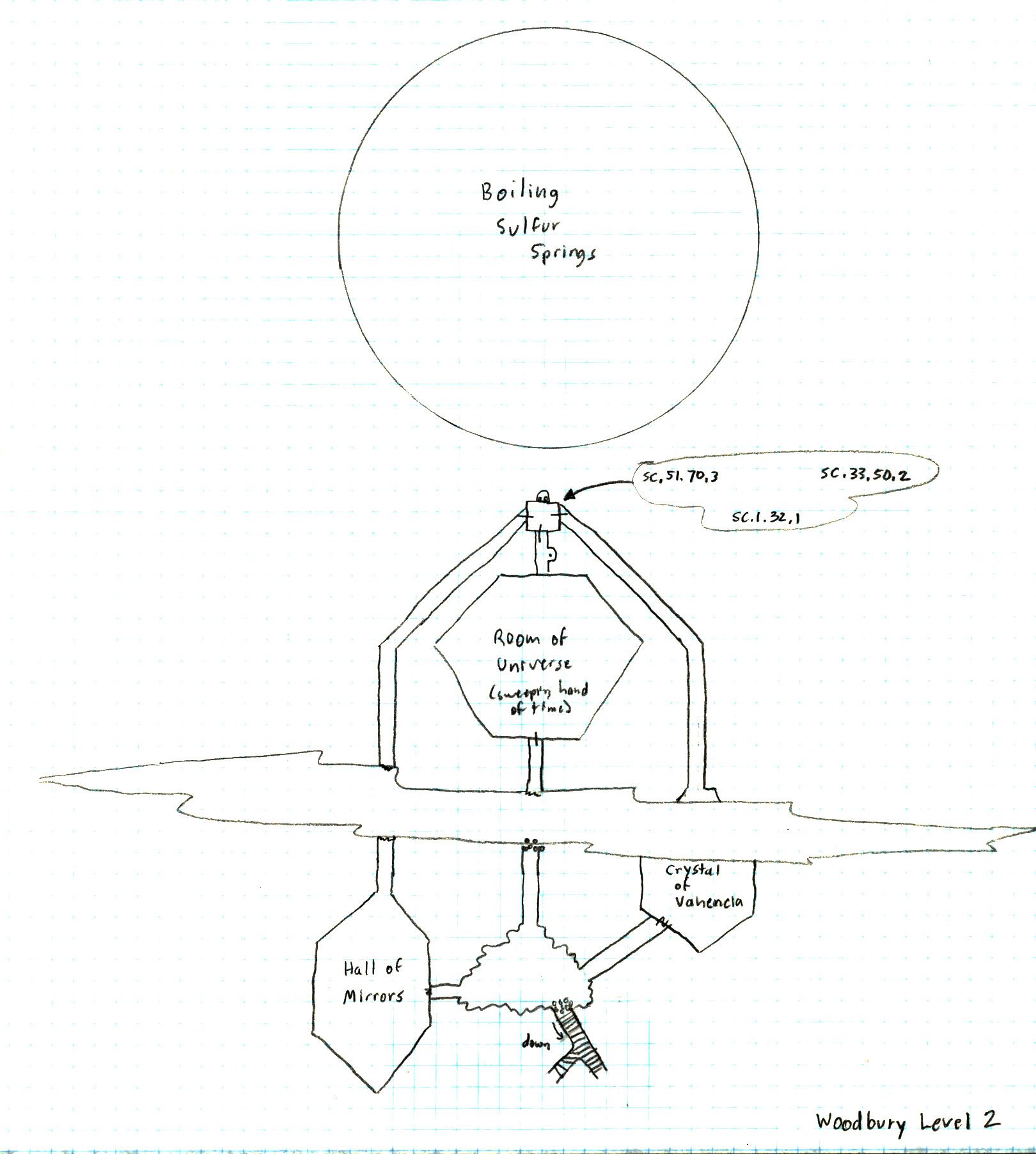 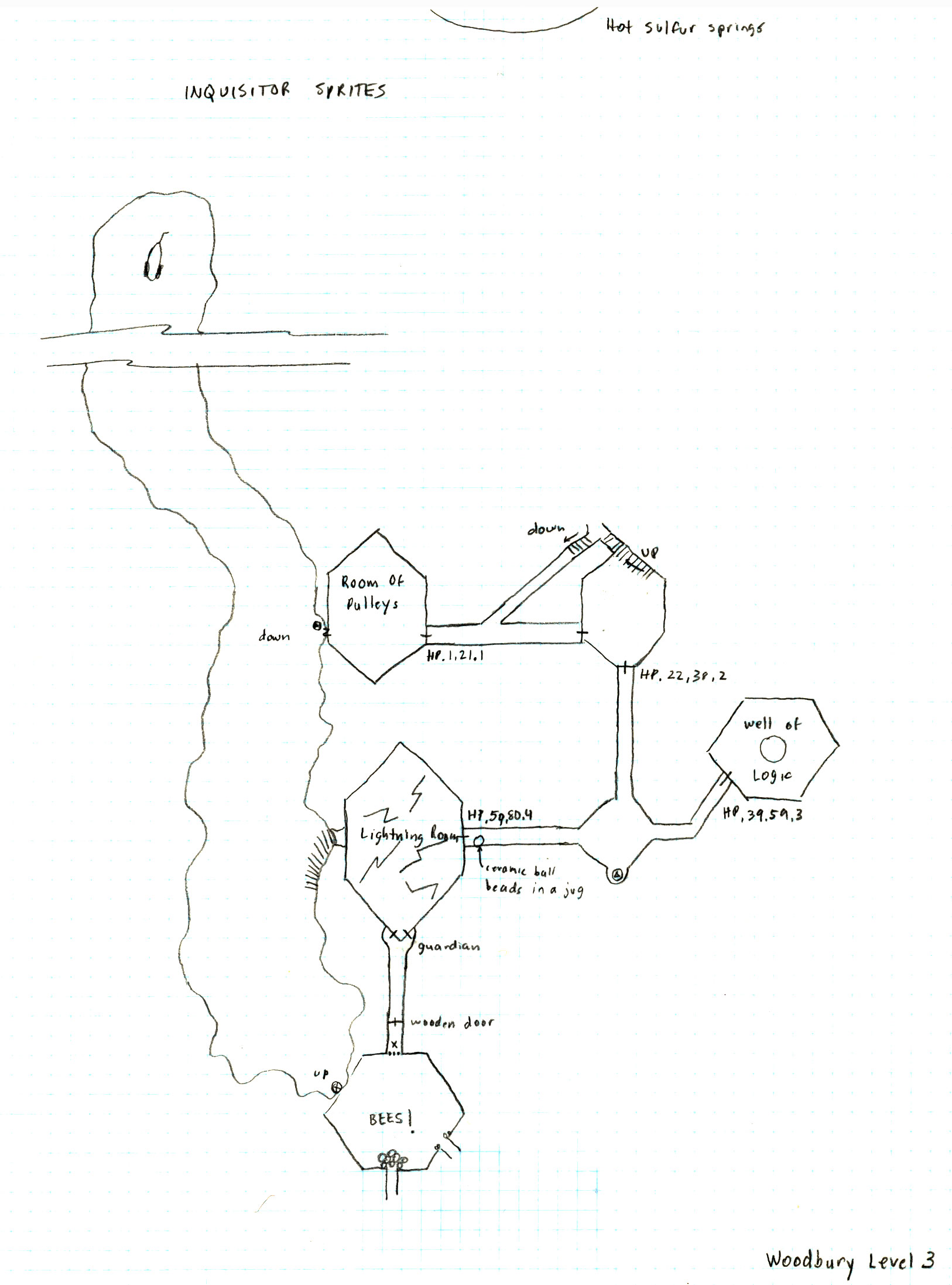