In the four years (828-832 TA) after the end of the Second Demon War, the Reaches enjoyed peace and prosperity. 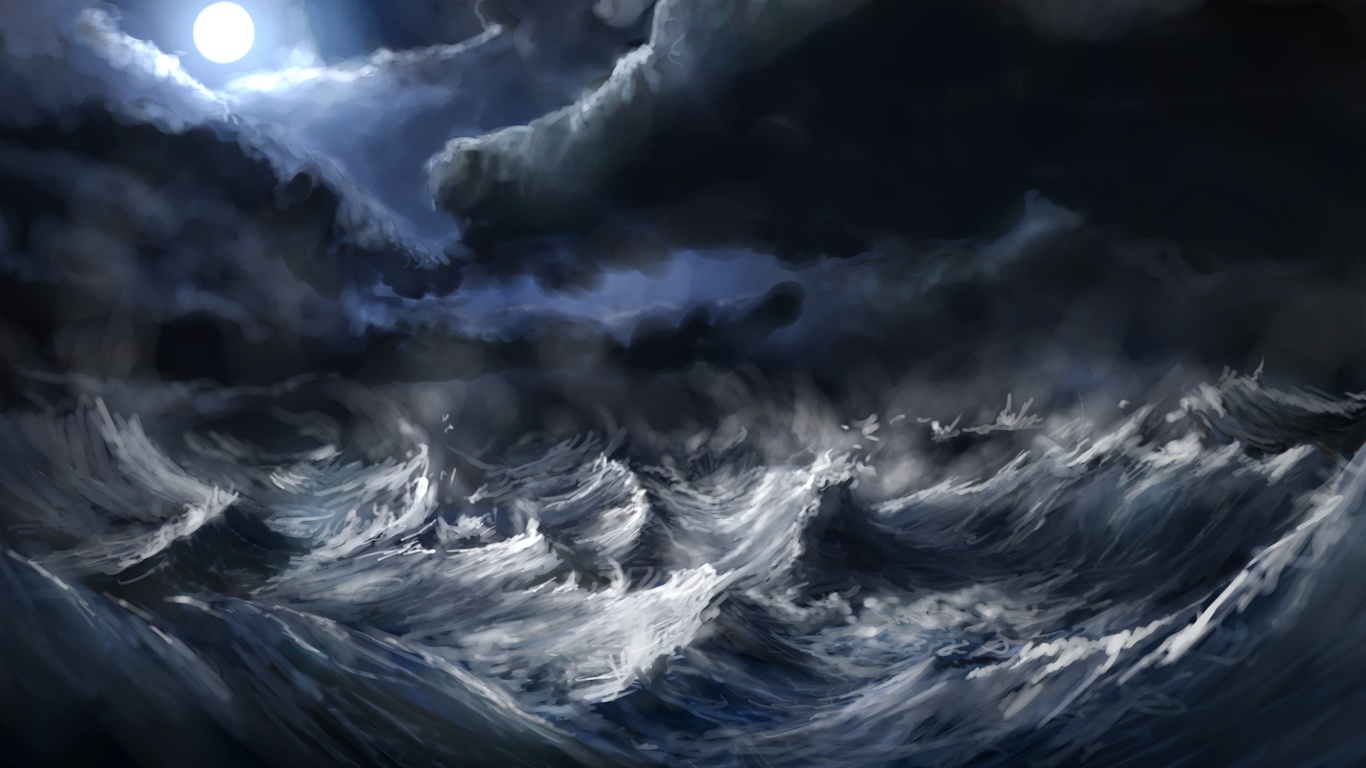 In mid-October of 832 TA, a storm began brewing off of the coast near the city of Teufeldorf. Unlike most storms, it did not seem to move at all. Rather it sat out to sea like an angry mob waiting to strike. Soothsayers and mystics called it an evil manifestation. King Gregory sent out scouts by both water and air, but none returned. It seemed as if no magic scrying could penetrate the evil darkness. The mood around Teufeldorf was tense and fearful. As the days passed, the storm grew and grew. Soon it took up almost the entire western sky.

Octobers can be rather cool in Teufeldorf, but the bitter cold of the storm was staggering. As the storm approached, horses and other domesticated animals became frantic, almost rabid. The children began wailing and speaking of the "Dark Man" who haunted their dreams.

On the last day of October 832 TA, the first wave of ice and rain blanketed the city. Winds of hurricane force blew over small buildings and cracked the city wall in many places. The deluge went on for six days and nights. The sun was blotted from the sky, and thousands were killed by the cold and the winds.

On the sixth night of the storm, King Gregory was sitting high in Teufeldorf Castle with his advisors huddled around him. Suddenly, a large bat-like human appeared in front of them. The temperature of the room dropped to frigid proportions and the king's advisors sat still as statues. The king called for the guards, but none came. The creature then spoke. It's exact words are known only to Gregory, as his court remembers nothing of a visit. But the message was clear: leave Teufeldorf with the court and his knights or watch the destruction of every living thing around him.

The next day, the storm had again moved off of the coast. King Gregory called together his advisers, court, and knights. Each was assigned a portion of the Reaches to guard. Farewells were made and King Gregory and Lady Laura prepared for exile. The good rule of King Gregory the Even-Handed had come to an end. An evil force ruled the land.

It was subsequently learned that the party led by Ernest Goodfellow was sent north into the Orc Nation on a secret mission. The mission's eventual terminus was supposed to be Dragonsford where Ernest Goodfellow had been given command of the garrison castle. Never arriving, the party was presumed dead, they were not seen in the Reaches again for 50 years.

Rise of the Shadowland Empire and the Brotherhood of the Seven

The fall of Teufeldorf was masterminded by an extraordinary coalition of the most unlikely of allies. The Brotherhood of the Seven were a collection of powerful figures all bent on one purpose, the destruction of the City-State and the spread of evil and chaos through the Reaches. The ruler of the Shadowland Empire was Baradar. He was joined by:

Although massively destructive in its fury, the rule of the Brotherhood and the existence of the Shadowland Empire was very short-lived. Baradar took up residence in Teufeldorf Castle as the King of the Shadowland Empire in November 832 TA. His reign was punctuated by brutal tortures and executions of all who had supported King Gregory. Trade was dramtically slowed by the introduction of massive taxes and tariffs. Teufeldorf Castle was closed to the public, and rumors of black summons and vile ceremonies started to circulate.

By the March 833 TA, most of the lands between the Shadowyarn Mountains and the Great Sea came under the influence of Baradar. The Kingdom of Teufeldorf was renamed Pentacle. Only the Eastern Reaches resisted the advances of evil. An alliance formed between the Orc Nation, Sandal, the Darksoul Giants of Giantshome, and the newly-formed Pentacle. This kingdom was known as the Shadowland Empire.

An invasion into the Eastern Reaches was planned for the campaign season of 834 TA. This included an orcish invasion through the Pass of Lar in the north, a siege of Rivershaw Castle which housed the strongest bastion of King Greogory loyalists, a major invasion through the Free City of Paddington by the armies of Pentacle, and a southern invasion through the Sands of Time by Sandal and Giantshome. After a call for aid by Hylax, a second meeting of the Wizard's Council was rumored to have been held, although it was unclear which side - if either - the wizards would support.

Fall of the Shadowland Empire

The invasion, however, never occurred. In October 833 TA, Baradar was challenged by the arrival of Grim, a son of Hastur, at the gates of Teufeldorf Castle. Grim demanded Baradar step down and pledge fealty to Hastur's Dominion. Refusing to do so, Baradar was slain in front of the castle. The remaining members of the Brotherhood fled, and the Shadowland Empire abruptly ended.