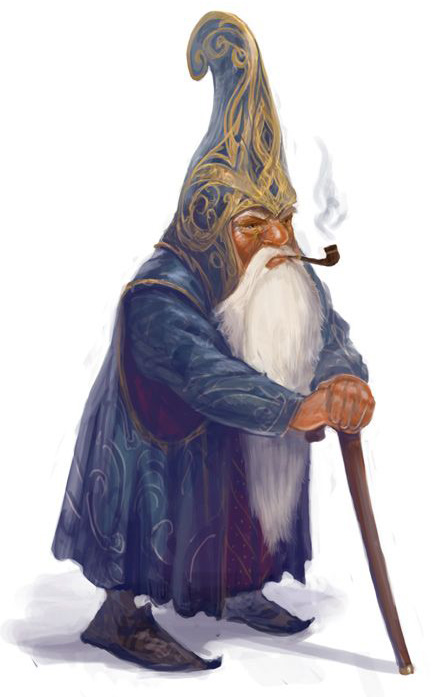 Gnomes and hobbits are the "wee folk" found commonly throughout the Reaches.

Gnomes are one of the smallest of the common races, generally standing just over 3 feet in height. Their hair tends toward vibrant reds and browns, their skin is ruddy brown, and gnomes tend to have overly large mouths, noses, ears and eyes, an effect which can be both disturbing and stunning, depending on the individual. Some scholars believe that gnomes can trace their lineage back to the mysterious realm of the fey. Unlike most races, gnomes do not generally organize themselves within classic societal structures. Whimsical creatures at heart, they typically travel alone or with temporary companions, ever seeking new and more exciting experiences. Gnomes' propensity for wanderlust makes them natural adventurers. They often become wanderers to experience new aspects of life, for nothing is as novel as the uncounted dangers facing adventurers.

Gnomes rarely form enduring relationships among themselves or with members of other races, instead pursuing crafts, professions, or collections with a passion that borders on zealotry. Gnome humor is hard to translate and often comes across as malicious or senseless to other races - and many gnomes are overly fond of playing jokes on the "big folk". To gnomes, action is always better than inaction, and many gnomes carry several highly involved projects with them at all times to keep themselves entertained during rest periods.

Gnomes are not particularly religious and have no racial deity. Gnome clerics will oftentimes join human religious orders. Adventuring gnomes are commonly members of the Fellowship of Wee Travelers.