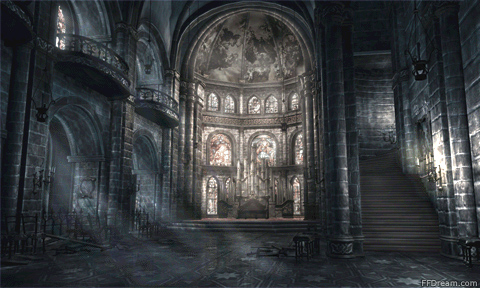 Orion is one of the most commonly worshipped gods in the Reaches - the patron of wisdom.

The Church of St. Theodore sits in the main courtyard of Dwarrowdelf Castle. King U-Gene, although worshiping the dwarven pantheon, is a major benefactor of the organization. The monks act as official scribes to the King as well as working on translating the early dwarven writings to the Common tongue. They also tend horses in the stables. Finally, the monastery produces exotic herbs and plants in the high mountain climate. The hard apple cider produced by the monks uses apples that grow only in the highest and harshest climates.

The Church of St. Theodore is dedicated to the First Age patron saint of Orion, God of Wisdom. Legend holds that St. Theodore traveled to the Western Reaches with some of the early explorers - a pilgrim to spread the religion of Orion to the denizens of the new lands. There, Theodore met with the original inhabitants of the Devil's Village - the name from which the modern-day Teufeldorf is derived. Among the inhabitants of the Devil's Village was a witch doctor named Adria. Adria's magic was as powerful as her hold over the villagers. She was rumored to be building an underground temple from human skulls taken from living sacrifices. Theodore, discovering that Adria was possessed by six devils, defeated her in magical combat - driving the devils from the island. Discovering Adria's dark temple, Theodore had it buried - forming the first foundation for the city that was to follow. Afterwards, Theodore tended to the spiritual needs of both the indigenous people as well as the waves of explorers that were to follow. After long service to Orion, Theodore was buried on top of Adria's temple mound - a final protector against the vile evil of the witch doctor. Canonized shortly after his death, a number of churches to St. Theodore can be found throughout the Reaches.

The largest Church of St. Theodore is found in Dwarrowdelf - having survived the transition from the Free City of Paddington to the Shadowkeep to Dwarrowdelf. The clerics and monks of the Church of St. Theordore are sill dedicated to the worship of Orion - and seek to find his wisdom throughout the races of the Realm.

The Church of St. Theodore actively worked against the oppression of Atli the White - playing a critical role in the Siege of the Shadowkeep. Kept confined by Atli, the monks were instrumental in unlocking the secret of a magical well by solving the riddle of the Dancing Men.

Monks of the Wait

A small sub-order of the Church of St. Theodore was founded by a priest, Wolmar (later St. Wolmar) and played a pivotal role in The Hastur Rebellions. This order was called the Monks of the Wait and existed from 835 TA until re-integration into the church at large in 885 TA having completed their mission.

In 835 TA, St. Wolmar had a vision on his deathbed of the end of the atrocities Atli the White was bringing upon the people of the Free City of Paddington (recently renamed the Shadowkeep) during the period now called Hastur's Dominion. Acting upon his instructions, a small group of twelve monks - called the Order of the Wait - built a small underground Temple of the Wait below the Church of St. Theodore in the central courtyard of the Keep. They waited for the "saviors six" in accordance to St. Wolmar's prophesy:

And to my priests, I say farewell,
But first a prophesy fulfilled,

Wait for the sign when all seems gone.
Your saviors six will come anon.

The monks lived by trading beer which they brewed for supplies - recruiting to keep a fellowship of twelve. The Monks of the Wait eeked out just enough of a living to support the twelve brothers.

In 883 TA, the Monks of the Wait joined The Pentaverate at the invitation of their brethren from the Church of St. Theodore. In September 883 TA, the saviors six did return. After an epic battle at the Temple of the Wait, the monks actively joined the rebellion against the forces of Atli the White.

The order was disbanded at the end of the Hastur Rebellions, and the monks returned to the Church of St. Theodore.