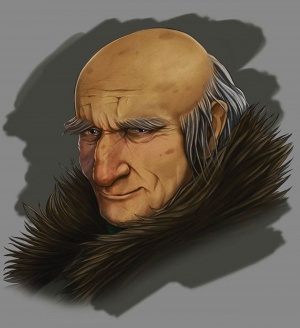 Elias Haggelthorn is the seventh Lord of Haggelthorn and the merchant patriarch of the family. The Haggelthorns are one of the oldest families in the Eastern Reaches having an ancient manor overlooking the Inner Sea south of Dragonsford. Never interested in local politics or warfare, the Haggelthorn reputation for trading in unmatched in the region.

Elias Haggelthorn was born in 850 TA, the only son of Harrison and Isabella Haggelthorn. Isabella died in childbirth, and Elias was largely raised by the household staff. Being one of the wealthiest families in the Eastern Reaches, no expense was spared in Elias' upbringing. He studied in Teufeldorf during his formative years and became a scholar in areas of history, arcana, rare books, alchemy and the like. At the age of 20, he returned to Haggelthorn Hall to take his role in the family business, learning under the guidance of his father, a ruthless and wildly successful merchant. When his father died mysteriously during the night when Elias was only 25, Elias took over the business without pause.

Elias married Henrietta Treadway, the sister of Nils Treadway, the Baron of Huntingdon. The Treadways are one of the oldest merchant families in the Western Reaches, and Elias met Henrietta while studying in Teufeldorf. By all accounts, the couple loved each other, although Henrietta had some difficulty with the lack of society and sophistication away from the big city. The Haggelthorns had two children, Maxwell and Mortimer. In 888 TA, Henrietta died of what is rumored to have been a poisoning. Her sons, both young at the time, were sent to Teufeldorf to be raised by the Treadways before returning to Haggelthorn to learn the family business from Elias.

Now in his mid-fifties, Elias rarely leaves Haggelthorn Hall running his empire from the ancient manse. While most of his business concerns are legitimate trade - specializing in consumer goods (beer, pipeweed, etc.) that are highly sought after in Great Sea ports, Elias has a passion for the dark arts and dangerous artifacts. Like his forebearers, Elias has odd tastes and a thirst to understand the unknown. An avid reader, Elias is a true scholar and a dangerous person to cross.

Elias is rumored to be connected with The Family, although no proof of this claim has been found.