Difference between revisions of "Falstaff" 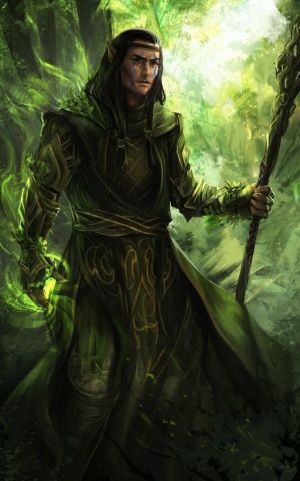 Falstaff is the Archdruid of the Order of the Book, tasked with protecting nature and identifying threats and disruptions to the natural balance. He is one of three Archdruids of the Druids of Oakentree. In his adventures, Falstaff discovered the Raiment of the Voice and subsequently became the first Paladin of the Balance in generations.

Falstaff's lineage is well known, as he is a direct descendant of Elvish royalty. Falstaff's maternal grandfather is Faldirion, Leader of the Host of the Radiant Dawn in the Reaches and his maternal grandmother is Valstariel, Forestal of the Misty Woods. He was born on September 12, 784 TA, the eldest child and son of John Oldcastle, a leader of the Rangers, and Tinuviel, an elven ambassador. Falstaff's given name is Fastolfe Oldcastle. His name amongst the elves is Falstavion. Later, upon being initiated into the Druids, he took the secret name of Owyn Glyndowyr.

Falstaff's early years were spent in the Misty Woods in the Western Reaches under the watchful eye of his grandmother, Valstariel, in an ancient home that his grandparents built in 670 TA. Both his father and mother traveled extensively in the Reaches in their official capacities. Falstaff's training to become a druid began early, and he quickly excelled in both academic studies - history and spellcasting, in particular - and wilderness survival and combat. Shortly after his training began, his mother Tinuviel felt a calling, and she journeyed west to become a member of the Order of the Silver Acorn. John Oldcastle returned to the Evenwild and often travels between Vendredi Hall and the Tree of All Branches. Valstariel still occupies the family home in the Misty Woods.

In June 826 TA, Falstaff intercepted two knights of St. Gilbert in the low hills west of the Misty Woods. Falstaff had been tracking a warband of Orcs of the Red Axe who had been raiding in the forest. The knights persuaded the young adventurer to join them in a battle against the Garnath, a legendary creature who threatened the area. It is there that Falstaff met Hylax and U-Gene, adventurers who would be his companions for next 61 years.

Falstaff was instrumental in the Second Demon War (821-828 TA) during which he found the legendary elf stones and two rune weapons. While never a subject of King Gregory the Even-Handed, Falstaff undertook a number of missions for the Crown including those against the Brotherhood of the Seven and the Shadowland Empire. In 833 TA, he undertook an adventure to the Netherworld, returning fifty years later having opened the Cave of the Elder Gods, some say in direct communication with Oakentree.

As an emissary for the Elves of the Radiant Dawn, Falstaff helped install the Three Kings - including his old traveling companion U-Gene. With the end of the Hastur Rebellions in 885 TA, Falstaff's duties became more focused on the needs of the elves. His last adventure with his old companions was in the Loftwood in July 887 TA.

Since then, Falstaff has appeared periodically - when the Reaches was in a time of extreme crisis. Some rumors hold that Falstaff has returned to the Evenwild while others place him as an elven ambassador to the Old Kingdom.