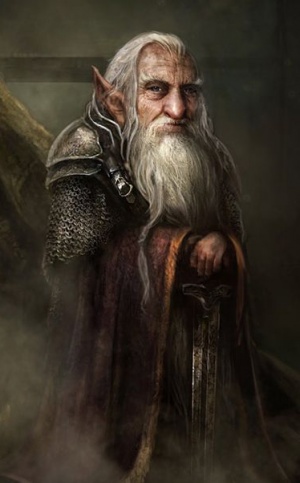 Hylax is a Wizard Errant of the Collegium Magicium. He also represents gnomish interests in dealings with the Crown. Many consider him the greatest living adventurer in the Realm. Hylax is the eldest member of the adventuring party also consisting of the Three Kings and Fuzzwort.

Hylax was born on July 3, 766 TA in the Land of Bogs and the Little People. His parentage is not well known, although his surname O'Barker has sometimes led to his nickname "the Barker". At an early age, Hylax showed an extraordinary talent for magic - spellcasting and crafting magical items. His talent was discovered by a traveling Collegium magician when Hylax was in his late teens. Archives in the Great Library show Hylax being admitted to the School of Illusion in 787 TA where he studied for almost thirty years, rapidly working himself through the ranks.

In 817 TA, Hylax was appointed to the Wizard's Council with a charge of providing council to the newly-crowned King Gregory the Even-Handed in Teufeldorf. Arriving in May 818 TA, Hylax began adventuring in Teufeldorf and its environs. The first defining moment of his career came in August 821 TA while adventuring in the underground Wraith City when a fellow adventurer accidentally opened up a Demon's Covenant. Soon, the Second Demon War (821-828 TA) was underway. Hylax went on many missions for the Crown in the early years, meeting his current adventuring companion U-Gene in June 826 TA. In October 828 TA, Hylax and his companions fought and successfully bound the demons under Mt. Todd - earning Hylax the moniker, Demonbinder.

Hylax was instrumental in the battle against the Brotherhood of the Seven and the Shadowland Empire. In 832 TA, Hylax successfully completed a mission to rescue Worldswing, a dragon of the Ether - giving the gnome his first taste of extra-dimensional travel. Thus began his lifelong obsession with planar and time travel. In 833 TA, Hylax traveled to the Netherworld seeking to open the Cave of the Elder Gods. Missing for almost 50 years, Hylax returned with several powerful artifacts including the Runestaff of Dimensions.

Upon his return, Hylax learned of the death of King Gregory. After consultation with the Collegium, Hylax began working tirelessly to install the Three Kings and overthrow Hastur's sons in the Hastur Rebellions. Since then, he has brought his considerable power to bear on a number of global conflicts including the First War of the Reaches (886-890 TA) and the Second War of the Reaches (899-907 TA).

During this time, Hylax has journeyed to the Void, Oblivion, and the Land of the Dead. He has written a treatise on the subject. He currently wields the Raiments of the Elder Mage in addition to his runestaff.

Unlike the rest of his traveling companions who look younger than their true age, Hylax appears much older than his years. Whether this is by design or due to his magical tinkering with time is unknown. Hylax is married to Mrs. O'Barker a formidable gnomish woman who runs the World's End Pub and Freehouse in Dragonsford in his absence. When in Dragonsford, Hylax can be found smoking pipeweed and telling outrageous stories at the pub.