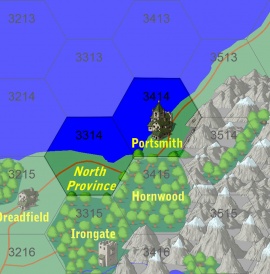 Portsmith is the capital of North Province, and the largest city on the Inner Sea. The port lies along the southern coast of the Inner Sea between the dwarven lands of Balinshold to the east and the Eastern Reaches to the west. The city was founded along the shipping trade route for ore and iron coming from the dwarven forges headed to the Reaches.

The current ruler of Portsmith is Jana Blackfire, who was elected in 904 TA to replace a corrupt governor and bring order to the region. Jana is known as the Crusader of Portsmith and her rule of law, known as the Gavel, is swift and merciless. Order is kept through mounted patrols - called derisively the Hexmen - consisting of a cleric of the Order of the Silver Throne, a paladin of the Order of Crusaders and four guards. While order has been restored, many citizens resent Jana's iron-fisted rule.

Portsmith (originally the "Port of Smiths" - referring to the early ore and iron trade) has a population of approximately 2,000 including the permanent garrison. The port has about twenty warships. Typically, two warships are in port at any one time. Numerous fishing boats and pleasure craft dot the coastline near the city.

Under Jana Blackfire's command are loyal officers including:

Merchant trade is the lifeblood of the city, and the caravan to and from Portsmith carry all manner of goods - well beyond its humble beginnings of ore and iron. It is rumored that the local branch of the Family is run by Jon Singleshadow and the Dark Path is headed by Gabriel Gloommantle, although the latter has been reported to be held in the city's most secure prison - the Vault. 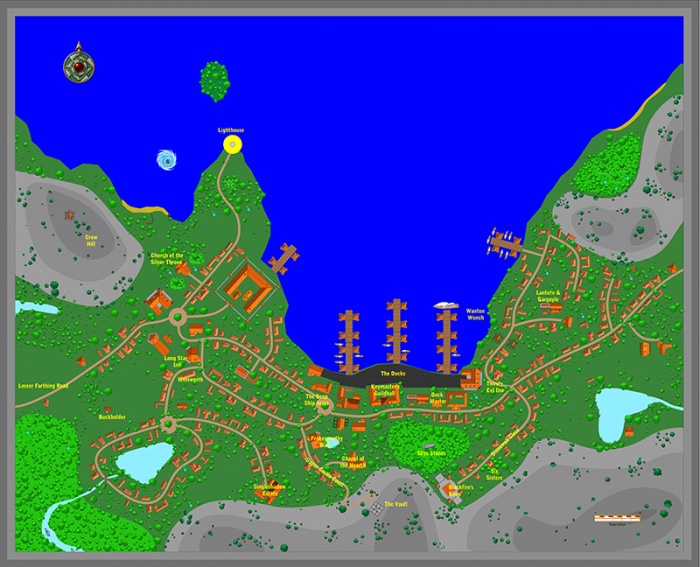 Founded in the early eighth century TA, the small port quickly grew into a place for the dwarven goods from the east to be unloaded for transport along the Lesser Farthing Road. The original village grew into a walled town, and the town grew into a small, thriving city.