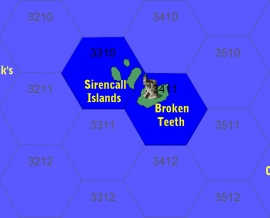 The Sea Barons nominally protect the merchant sea lanes of the Inner Sea for Dragonsford. Their headquarters are in the Sirencall Islands with the current High Baron Mastway holding court at Broken Teeth, the ancient castle of the Sea Barons.

History of the Sea Barons

The waters of the Inner Sea have always been shrouded by extreme weather, fog banks, tales of lost islands, sea monsters, and fierce pirates. Haggelthorn established early trade routes with the Balinshold dwarves and later the rest of the Realm via the Frozen Sea to the north. Soon after after the founding of Dragonsford in 705 TA, merchant ships began stopping at the frontier castle - a logical extension of the southern trade routes on the Inner Sea. However, by the mid-eighth century TA, piracy was becoming a problem and Dragonsford was facing losing their merchant sea commerce.

In 760 TA, the crown appointed four nobles to baronial island fiefs, instructing them to build ships to combat the ever-growing pirate presence. In addition, the baron who excelled at naval warfare would be appointed Admiral of the Eastern Reaches as well. While some competition might be good for finding the best candidate, the Sea Barons proved ruthless not only to the local pirates but to each other as well. Tales of summoned sea monsters and an alliance with a ruthless cabal of merfolk abounded - although none of these were ever substantiated. During the great storm of 766 TA, the island home of the Blue Baron was completely lost to the sea - along with the twelve ships under his command. A final battle of the three barons ensued in 768 TA. From this conflict, Baron Mastway, a barrel-chested former buccaneer from the Sprindrift Isles, emerged as the High Sea Baron. All the ships, castles and islands were subjugated to Mastway's iron rule. Shortly thereafter, Mastway claimed his title as hereditary and discarded the title of Admiral of the Inner Sea.

Today, the current High Baron Mastway, Roland Carver, is a thin, sickly man with stringy black hair and a most foul disposition. He lives in his castle at Broken Teeth and rarely ventures out to sea. The daily operations are run by a wizard nicknamed Stormcrow who holds council and coordinates the efforts of the Sea Barons. Territories are divided among the High Baron and two lesser barons. Oliver "Three Fingers" Winters, Sea Baron of the East Winds, is headquartered at Hidden Skerry. Miriam "The Sea Widow" Wess, Baroness of the West Winds, is headquartered at Inchgarvie - known as the "rough island" by the dwarves. Each of the barons is rumored to have a dozen warships.

Map of the Sirencall Islands 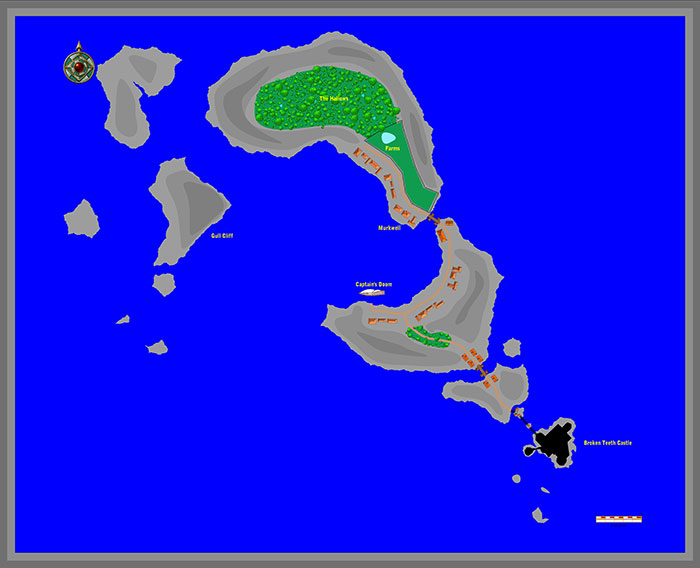 The Inner Sea defines the far eastern boarder of the Reaches. The sea is cold due to swift currents from the north, but it rarely freezes over this far south. Because of its rough nature and isolated position, this water is traveled mostly by merchants and traders. The Inner Sea is cuts down into the land with the northern opening leading to the Frozen Waters (a great ocean which circles the polar cap). There are three kingdoms which use the Inner Sea for trade: merchants from Haggelthorn and Portsmouth, dwarven traders from Balinshold, and the Sea Giants (who come in their great stone ships from parts unknown). Little is known of any of these far away places, and the people of the Eastern Reaches rarely travel the sea to explore them. Tales of pirates and sea monsters generally keep the Eastlanders (as the Sea Barons call the humans of the Eastern Reaches) close to shore.