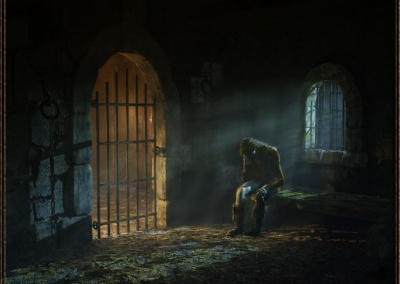 Breakout from The Vault

I am finally free. Weeks of rotting away in The Vault, the proud prison in the town of Portsmith, have come to an end. The Order of the Silver Throne never knew what hit them. I am writing this now to remind myself of the humble origins of the crew of the Wanton Wench, when we inevitably become infamous all across the Great Sea.

This afternoon I escaped from The Vault with my cell mates. I have been trapped with since I was put into that hell hole for being of impure blood. Saying I am going to eat the soul of your firstborn is a common retort where I came from, and certainly didn’t require shackles and branding. With me in the cell were three others:

We had been stuck in that cell together for I don’t remember how long, when we started hearing a tapping on the walls from outside. It was rhythmic and repetitive, and before long, we realized it was Morse code. It was telling us to “wake bird, use brick”. Had someone given us our keys to freedom? We began frantically searching inside and outside our cell to find what the code might be leading us towards.

Inside our cell, we found a space where a brick should have been, and reaching in, the hole for the brick contained smaller holes further back, like for a key. Outside our cell, on the mantle above the fireplace where the Order held their brands, was a magnificent parrot fast asleep, chained to the wall, and next to it, was a brick with small pegs sticking out to one side. Wrane decided to use a spit wad to wake the bird, and his aim was true. The bird awoke and immediately started talking to us!

Its name was Java, and it wanted to escape as badly as the rest of us. We agreed to take Java with us if she could get us that strange brick. She agreed, and pushed the brick off the mantle and to our cell, although the sound of the brick falling seemed to have alerted the guards that not everything was right. We quickly grabbed the brick and Java, broke her chain, and placed the brick into the hole. When it was placed, the floor, ceiling, and back wall moved upwards. When it stopped, we were on the next floor of the dungeon, and the cell door here was open!

Arranged about us were numerous cells, each decorated with an assortment of, let’s just say odd, characters. Unfortunately, the noise of the cell moving caused the entire prison to be put on full alert, and so time was limited. As a group we decided to try and release as many as possible, to create confusion, and possibly create a couple of allies for our escape. Below is a list of the ones I released, using a fork and some ingenuity:

Of note, there was one person who I did not release, much to the rage of our two holy men. This must have been a man of some power, as he was both chained to the wall and gagged, behind his cell. Chironomous removed the gag, and immediately became obsessed with the idea of freeing him, and soon after, our priest joined that strange obsession. I did eventually get to his cell, although I was hesitant. Anyone that powerful could be a threat to us, and the idea of irking my colleagues gave me just a small amount of glee. I attempted to unlock his door, but without much heart or effort and could not free him. Our holy men were still insistent, so I gave the priest a “bomb”, to keep himself occupied while I worked on the other cells. Apparently, the wizard took exception to the failure of our priest, and told him that he was marked for death.

While I was unlocking the cells, the others realized that if we put the brick back into the hole, upside down, that the cell would move back down with it, and above the cell, was a shaft, that led to the roof of The Vault. We figured that the roof was our best means of escape, and began to make plans to go up.

The dogs, so many of the evil little cretins, able to blink through walls and doors, started to attack as we were finishing the cells. Chironomous and the priest took the ones we had freed up through the shaft, while Wrane and I finished the last cell, the demon. For the sake of knowledge, I shall record that the bite of a blink dog is deep, and quite painful, as they decided that they were not going to let me go. I am quite grateful to Wrane for carrying me to the shaft while barreling through those monstrosities. At the shaft, I enlarged Wrane so that we could both climb up to the roof, as by then, the others had already made their escape.

Upon the roof, we could taste freedom through the salty air, and could see the town of Portsmith below. There was a chute that led down to the ground, and we prepared to leave through that portal, when the blink dogs reached us again. This time, it was Chironomous’s time to shine, as he unleashed a wave of energy that swept over the dogs, and forced them back. With the dogs removed, we went down the chute, and ran for freedom.

We decided to escape through the nearby woods, as it was the only way to get some cover between us and the roaming guards. As a group, we decided to go to the nearest, and cheapest inn we could find, as Nick told us we could get help there. We made our way through the woods, and came upon one of the legendary Skye Stones, although we were too busy to dally there for long. It was about that time that Wrane spotted one of the children from the vagrant family was missing, and when he confronted the father, he simply stated that he was on a mission, and that we were to keep going. Though disconcerted we carried on, although paying a bit more attention to our “vagrants”.

We made it to the Thirsty Eel Inn, and although the owner was furious that we were there, Nick convinced him to help clothe and equip the lot of us with whatever he could. Unfortunately, it was here that Lord James decided to part ways, as he told us that he could not stay in this company, and told us that our “vagrants”, and Nick, were none other than members of the local assassin’s guild! Failing to convince him that that meant they were powerful allies, he took his leave, to clear his name, and find the killer of his beloved.

Now that we were clothed, we tried to decide the best course of action for escaping the area, and we agreed that leaving by sea was our best bet. A storm would hit in three days, on the harvest, and that if we could leave before then, ships could not follow us. Unfortunately, the only possible ship we could take was a scrapped vessel called the Wanton Wench, who was abandoned and in disrepair. Chironomous decided to go to the ship to assess it, while Wrane, the priest, the girls, and I went to the Lantern and Gargoyle, where the girls had been staying and where they said we might find help.

We arrived at the Lantern and Gargoyle, and the girls were met with glee by what seemed to be there leader, Lulu. Lulu, appreciative of us helping her girls, treated us to food and drink, and Java a large amount of coffee beans. After our little feast we made a deal with her that she would help us put together a crew for the Wanton Wench, and that together we would escape this little town. We went to go join Chironomous at the ship, so we could assess how much work it would need to be sailable.

When we arrived, we saw a sore sight. Although the hull was in decent condition, the front mast was missing, and there was blood all over the deck and beach. Chironomous told us some treasure hunters had just fled here, lured by stories of silver and gold below deck, but fled when one of them was torn apart, leaving behind nothing but a bloody foot, and stating that the ship was cursed. Figuring that the threat was not supernatural, we made an arrangement with the girls, that they would find parts to repair and equip the ship, while we cleared out the threat on the Wanton Wench.

We made camp on the ship for the night, as our magical stores were pretty much depleted all around, and figured the water would stop any bloodhounds from finding us out from shore. As we were settling in, we saw a band of guards on shore discuss the ship, and leave one behind to keep watch, while the others moved on. As we settled in, the creatures that “haunted” the ship attacked. A swarm of dire rats pounced on us, and we fought them tooth and nail, when something stabbed me in the back. It was quick, and although one of my bombs landed near it, I could not pin it down. It went for me again, and I fell to the ground. The last thing I remember was the laughter of a child.

When I awoke, the rats were dead, as well as the creature that attacked me. It was a fey, a quickling, and the rats were its pets. I was healed by our two holy men, who I am grateful for and who will be useful. Perhaps first mate and cabin boy. After kicking the fey a few dozen times, I extracted blood, hair, etc. from the body, as you never know when such things could come in handy, and then we decided to make our way below decks.

Below, on a table near the aft of the ship, was the fey’s “hoard”. Several dozen pieces of silver and gold, that we intend to split among the five of us. Our priest also discovered several sources of magic in the ship. The ship itself had an aura of enchantment, which seemed to be why the ship was relatively intact despite the amount of wear it should be carrying. He also pointed out a stronger enchantment inside the quartermaster’s chambers, as well as an aura of necromancy in the captain’s quarters. Already severely weakened, we checked the quartermaster’s chambers first.

Inside, hidden under the bed, was a small, enchanted chest. It was locked shut by a magical puzzle, that required the user to trace a pattern in order to open. This being my shining moment, I gave the others a few minutes to go over it before showing them the correct answer, and opening the box to their amazement. Inside, was a number of enchanted gears, that seemed to be the key to operating the ship, even without a front mast, and the log book of the ship, which our priest is poring over as I write. We are now giving ourselves time to pause and recuperate, before exploring further, as who knows what other traps and creatures might still be here, waiting for us. I am hopeful for the future, as this ship will be our key to freedom, glory, and wealth beyond imagining. All it takes is a group of men and women as ambitious as me to get the ball rolling. The Wanton Wench will rise again!