Difference between revisions of "The Realm"

The Realm, The Reaches and The Rim

The entirety of the known world is called the Realm. The lands of the Realm rim the Great Sea and consist of two large continents and a number of smaller islands and archipelagoes. The largest continent is known by common folk as The Rim, although many scholars refer to the landmass as Perem Major. The smaller continent is called The Reaches by most, although the pedagogical description Perem Minor is more technically correct. There are nineteen major political divisions in the Realm subdivided into hundreds of minor kingdoms.

The Rim refers to the largest continental landmass in the Realm dominated by a massive forest in its center. Because civilization began along the coastal waters of this continent and sea routes were established long before overland routes, it became known as the Rim of the Great Sea. This landmass stretches from Korgsland to the Wilderlands. Commonly held to be the birthplace of all the great races, the coastlines and rivers of the Rim were populated early in the First Age. The Western Kingdom of Rembia is the oldest human monarchy in the Realm, although the eastern lands of the Rim have only recently seen colonization. The Rim now encompasses the present-day kingdoms of Korgsland, Thorinshold, Rembia, the Freelands of the Feudal Lords, the Forbidden Lands, Elothian, Calinshold, Wyrmwyld and the Wilderlands.

The Reaches refers to the continental landmass bounded on the west and south by the Great Sea, on the east by the Inner Sea, and on the north by the Frozen Sea. A mountainous neck of land connects it with the Wilderlands, and only a small strait separates the Reaches from Korgsland. Largely unexplored during the First and Second Ages except along the coast and major riverways, the Reaches now encompasses the present-day kingdoms of the Orc Nation, Western Reaches, Durinshold, Eastern Reaches, Sandal, Wolfshaunt, the Tomb Kingdom, and Balinshold. 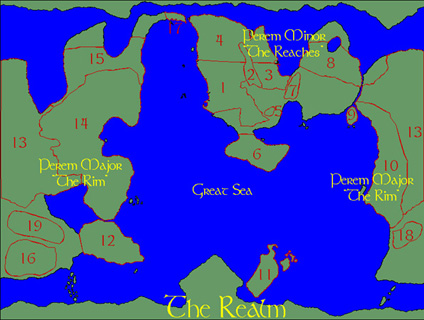 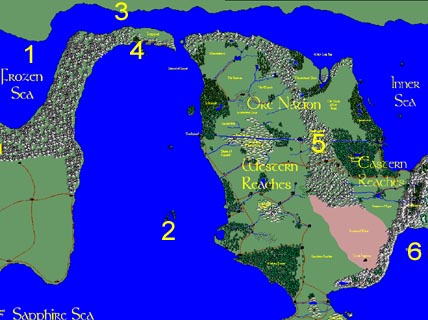