Difference between revisions of "The Realm"

The entirety of the known world is called the Realm. The lands of the Realm rim the Great Sea and consist of two large continents and a number of smaller islands and archipelagos. There are twenty major political divisions in the Realm subdivided into hundreds of minor kingdoms. While much of the Realm has been identified, most of it remains unexplored. Adventure, treasure and glory await those brave enough to do so.

The largest continent is known by common folk as The Rim. The smaller continent is called The Reaches. Both border the Great Sea and are filled with races, creatures and monsters of vast diversity - each with its own history and secrets. It is in the Reaches that most of the adventures have taken place - with extensive exploration from the early ninth century TA until present. It is currently 905 of the Third Age (TA). 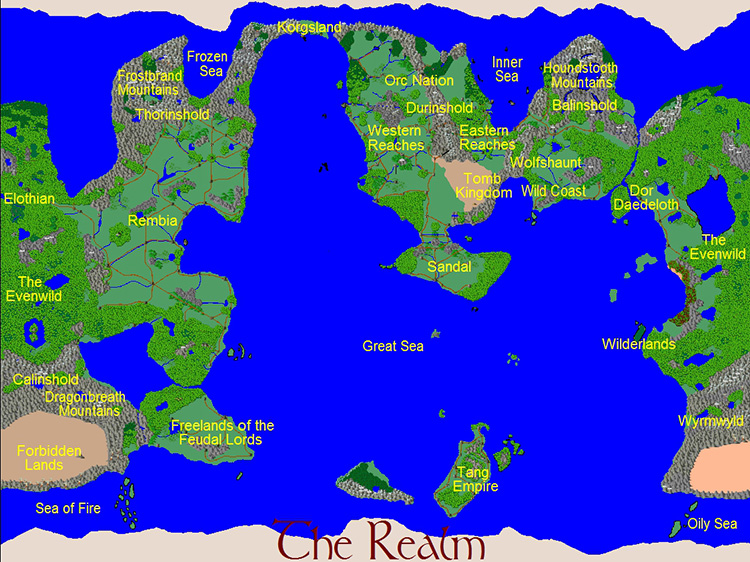 The Reaches and The Rim

The Reaches refers to the continental landmass bounded on the west and south by the Great Sea, on the east by the Inner Sea, and on the north by the Frozen Sea. A mountainous neck of land connects it with the Wilderlands, and only a small strait separates the Reaches from Korgsland. Largely unexplored during the First and Second Ages except along the coast and major riverways, the Reaches now encompasses the present-day kingdoms of the Orc Nation, Western Reaches, Durinshold, Eastern Reaches, Sandal, Wolfshaunt, the Tomb Kingdom, and Balinshold. The pedagogical name for the Reaches is Perem Minor.

The Rim refers to the largest continental landmass in the Realm dominated by a massive forest, the Evenwild, in its center. Because civilization began along the coastal waters of this continent and sea routes were established long before overland routes, it became known as the Rim of the Great Sea. This landmass stretches from Korgsland to the Wilderlands. Commonly held to be the birthplace of all the great races, the coastlines and rivers of the Rim were populated early in the First Age. The Western Kingdom of Rembia is the oldest human monarchy in the Realm, although the eastern lands of the Rim have only recently seen colonization. The Rim now encompasses the present-day kingdoms of Korgsland, Thorinshold, Rembia, the Freelands of the Feudal Lords, the Forbidden Lands, Elothian, Calinshold, Wyrmwyld and the Wilderlands. Many scholars refer to this landmass as Perem Major.

More has been written about the Great Sea by the poets and storytellers of the Realm, and yet little is known of it true nature. The Great Sea borders most of the major kingdoms of the Realm providing a means of communication, trade, exploration and warfare. From a poet's view, the Great Sea provides adventure and connects the mundane world with exotic locales and faraway dreamlands. To the sailor who braves its vast breadth, it is a sometimes dangerous mistress - filled with storms that last months, monsters of unimaginable size, and strange creatures of intelligence and cunning. The Tang Empire are the greatest sailors in the Realm, and Tang ships can be found in every port. The Great Sea is filled with islands and archipelagos, although the vast majority of these are uncharted - and many are refuges for those who have been exiled by society or wish to remain lost.

The Great Sea refers to the central water feature of the Realm. A number of small bays and seas extend from it, although all of these are driven by the currents and storms of the Great Sea. The general flow of currents is clockwise in the northern hemisphere and counter-clockwise in the southern hemisphere with oceans. The deep oceans are prone to storms year-round with peak activity in October and March. To the far north and far south, waterways around the polar regions provide the only other major ocean routes outside the Great Sea.

A northern ocean consists of a continuous linkage of seas surrounding the polar ice mass. Currents are generally west to east, and most of the northern seas freeze during the winter months. When not frozen, these seaway provide critical trade routes to the more remote kingdoms of the Realm. While stormy, these seas are famous for thick fog and strange beasts. The northern seas connect to the Great Sea by several narrow straits - the most commonly used is the strait east of Korgsland.