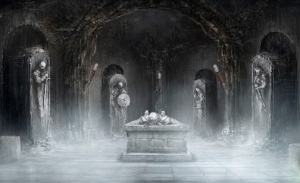 The accounting of time for the Third Age of Man began with the arrival of Heaven's Fire. After several score years of wintry darkness, the sun finally reappeared. Again, the races began to emerge from their burrows and hiding places. The forests found new life, and the plains saw regrowth. However, many of the civilizations of the Second Age were gone. The great people who had followed Bast and Set centuries ago could not be found. Neither could the fabled Valley of the Gods. They had disappeared.

In the west, the search began anew for a descendent of Isolde. Finding a bloodline that was pure after almost three thousand years took belief in the divine. And yet, the Empire of Rembia returned. A new emperor was crowned, Maximillan I, and the Celestial City began to rebuild from the rubble of its former glory. Rembia was never to regain its prominence, however. The Feudal Lords to the south garnered favorable trade status with the Tang Empire. The elves fought hard to keep the forests from being plundered for the wealth that was needed to rebuild Rembia. Belief in the emperor remained strong along the shores of the Sapphire Sea, but elsewhere new lords and leaders were beginning to take hold.

It was not until the mid-second century TA that Teufeldorf was again repopulated. Men fleeing from the now numerous orcs (it seems as if the years of disease had only helped to increase the number of orcs) stumbled upon the remains of Teufeldorf. With its strong defensive position, the men held on, and soon Teufeldorf became a refuge for the oppressed.