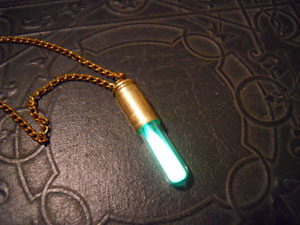 A Bullet of Ichor

The ichor is a super-fuel discovered in very small amounts in 1872 by a Himalayan expedition funded by the East India Company. Its source is closely guarded by the Directors of the company.

In 1891, there were only 3 hogshead barrels (a total of about 165 gallons) of ichor imported by the East India Company – the stated worldwide sum of its production. This production level is similar to previous years.

The ichor is bright green in color with a natural phosphorescence. The properties of the ichor are that a single drop will vaporize 50 gallons of water without the production of any heat. The liquid is also amazingly low-density – about a tenth that of water. A 55 gallon barrel of ichor weighs only 40 pounds. These remarkable chemical properties have greatly accelerated the creation of steam-powered devices from the mundane (steam-powered pocket watches) to the fantastic (steam-powered flying boats).

Newspapers and the popular press have dubbed this new age of mechanized wonder the Clockwork Age of England.

A single drop of ichor will power:

The rarity of ichor has driven the price of the liquid to astronomical prices with a single drop costing 1 pound sterling – approximately 100 times the value of gold by volume. This makes the value of a hoghead over four million pounds – about 1% of the import market for all of England. A single hogshead would provide enough income to build two Biltmore Estates.

All sales of ichor are made through the East India Company with strict rationing to avoid export from England. Ichor is sold in three sizes:

Testing of the vapors produced by the ichor have been certified 100% safe by the Fellows of the Royal Society of Chemistry (RSC) and the East India Department of Steam and Clockworks.