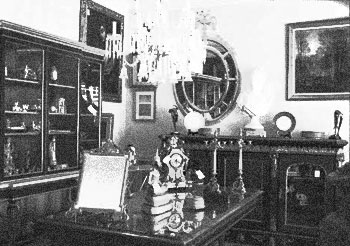 From the street, the four-story Gaylord’s Auction House sits on a small triangle of land. It is an odd structure in that only three sides of the building have finished stonework. The fourth side is a plain brick wall. The other three sides are capped in marble and fieldstone with large plate glass windows looking out on the intersection of Brook, New Bond and Avery streets. The building is fashionable, as you would expect from a New Bond Street business. A single patron’s entrance is gained from the New Bond Street. In the marble above the door is carved, Gaylord’s Auction House – Founded 1801. From the outside, it is clear that although the building is four stories high, there are most likely just two large floors contained within. Several large metal doors face onto a small path from Brook Street – obviously an entrance for wagons.

The grounds are surrounded by a high wrought iron fence. Two entrances are padlocked during the evening. Only the Bond Street entrance is opened during auctions. A number of trees grow on the ground – creating a small grassy park. A kennel with 4 guard dogs is hidden on the side of the building.

The brass and glass double doors to ground floor foyer of Gaylord’s Auction House are made of the finest imported Irish cut leaded crystal. A wooden floor is well-worn but polished. A second set of glass doors lead into the main auction hall. A large rack for coats and an umbrella stand are near the door. A round table with a young lady handing out programs is in the other corner.

The Auction Hall is a large room with rows of comfortable chairs facing the auctioneers stand at the front of the room. Windows on three walls let in plenty of light. The rear wall is stone. At the front of the room a wooden podium is raised slightly and flanked by two large tables. A set of stairs lead up from one corner of the room. If an auction is going on, Crabtree and three employees and four guards will be on duty here. In the evenings, there will be one guard – generally hidden in the chairs. The rear wall is of recent construction.

From the notebook of Scotland Yard. After the fire at Gaylord's Auction House, the following employees were interviewed and cleared of any wrong-doing:

Terrance Cavendish - employee of the Gaylord's Auction House. He helps with the tables during the auction, and with cataloging and setup during off days.

Elias Crabtree - purveyor of goods at Gaylord’s. An elderly gentleman with a fringe of white hair and slight lisp in his voice. He speaks very softly. His bright blue eyes are fiercely intelligent and old Crabtree can be quite argumentative if riled. It is rumored that he always carries a Monocle of Magic Detection.

The following employees were added to the Scotland Yard watch list: