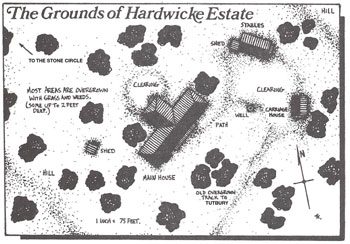 Map of the Grounds of the Hardwicke Estate

The Hardwicke estate is located about four miles northwest of Tutbury, at the end of an old overgrown track. Along the way, you glimpse the collapsed and wildly overgrown remains of three long-abandoned farmhouses.

The manor house lays in an isolated, wooded section of the hills that make up the outskirts of Tutbury. The estate includes the manor house, a well, carriage house, stable and two small sheds. All are in disrepair, and the surrounding areas are overgrown with wildflowers and tall weeds.

Hardwicke House has two stories, and appears structurally sound. None of the windows are broken. There are still a few cobwebs and dirt inside, though the worst seems to have been cleaned up recently. The house is only sparsely furnished, and those that remain are draped in sheets, giving the place the appearance of being haunted by large, squat ghosts.

Edward Hardwicke’s wife, Clarissa, died suddenly several years ago. Rumored to have hung herself, Edward and young Nathan both went into a decline. Servants were dismissed, animals were lost, and crops were never planted. Edward died shortly thereafter. Nathan has let the place fall into ruins. He would come into town each night to eat and drink at the bar, returning only in the wee hours of the night.

Hardwick House is supposedly haunted by the ghoul of Clarissa.

The well is stone-walled and very deep, about 35 feet down to the water’s surface. The water is clear, potable and cold. An old rope and bucket used to haul it up sit nearby. Both have been replaced recently.

An old carriage house is filled with cobwebs and stiff, rusted riding harnesses, some rusty tools and a wooden carriage wheel. Rotting scraps of rope hang from the exposed rafters overhead. The building is large enough to hold a good-sized wagon or coach. The roof is weak and sagging.

The outer shed is small wooden structure has recently been repaired. There is a padlock on the door. A pile of old rope and leather scraps sit nearby (recently discarded).

The stable holds stalls for eight horses, now empty save for cobwebs and decayed hay. Hanging from wall pegs are a few tools, coils of rotting twine and rope, and an oil lamp. A ladder leads to the hayloft above. Attached to the stables, the shed stands with its door ajar. Inside are many rusty tools on a long workbench: hammers, mallets, saws, nails, wrenches, an anvil, an axe.

From the notes of Dr. Clive James, the following are the members of the Hardwicke House:

Nathan Hardwicke – Master of Hardwicke House. In January 1892, he was pulled into service by promises of riches by Rufus Crabtree haven allowed his place to fall into shambles. His father, Edward, who died a few years back, would be disgraced to see the place.