Marleybones Journal No. 3 - The Albert Embankment 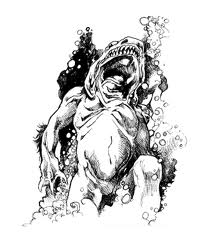 From Royce’s notes, several important connections are made.

First, the means of death of the four “brilliant” men at the Windmill Pub is too close to the procedure that we discovered at 12 Fishbone Alley – brains removed, bodies dismembered. My supposition is that they went to the same or similar recruiting house and were killed by the insects. Perhaps the bodies are near another recruiting house? Maybe they were dumped on the Embankment as a ruse – we need more information.

Second, the fifth man who was at the Windmill Pub – the barkeep indentified as Frederick – clearly matches with the last entry in the cultist’s ledger – Frederick Johannsen. Coincidence? Perhaps he is the only man who passed the test and was admitted into the Cult of St. Toad. Did he also take the vial?

Finally, who is the mysterious man responsible for pulling Royce from the accident – who gave him the direction to the recruiting house of the cultists – who gave him the elixir? It is hard to determine if he is a friend or foe - rival cult perhaps? Since we have no leads to the whereabouts of the colloquial French gentlemen, his role remains a mystery.

With the night quickly fading, we decide to head to the Embankment for some after hours investigation.

Scene 4: Adventures at the Albert Embankment

The Albert Embankment runs for a half mile along the Thames from the Lambeth Bridge in the south to the Westminister Bridge in the north. It was built on reclaimed swamp land and provides flood protection to the low-lying areas in this area of London. Some of the reclaimed land was sold to the trustees of St Thomas' Madhouse – which now looms over the area.

The embankment is a narrow pedestrian promenade in front of the St. Thomas’ Madhouse, with carriage traffic carried behind the madhouse on Lambeth Palace Road. The embankment is adorned with sturgeon lamp standards to the designs of George Vulliamy.

At the southern end of the embankment, a large muddy field runs to the Lambeth Palace Road and the Palace Gardens beyond. The proposed site for a Medical School building, no construction has taken place.

A hastily constructed wooden barricade marked with Scotland Yard warnings has blocked off the end of the promenade forcing foot traffic to cut across the muddy marsh in order to reach the road and Lambeth Bridge.

As we disembark at the Lambeth Bridge to take the shortcut across the muddy marsh, it is hard to shake the oppression of the stone edifice of the Madhouse. Looming in the darkness is the stone and brick edifice of the Madhouse. Even freshly painted iron cannot make the barred windows seem less a prison – a dark and sinister countenance. Shaped like a Victorian squid, four long arms radiate from the central building.

As expected, the embankment is deserted – police tape and a large oil cloth on the cobbles are the only sign that anything unexpected happened here.

Under the oil cloth is a large area of bloody carnage. Even without the bodies, I can see that this is a place of death. Streaks of blood, now dried, show an entanglement of limbs being dragged across the stone. Most disquieting are very large, webbed footprints that can clearly be seen. In some places the imprint of a large frog is evident – several of which have been outlined in chalk.

My stomach lurches. Giant frogs – the cult of St. Toad - maybe my grasp of reality is not quite as firm as I thought.

Using our lanterns, a careful search of the area is conducted. A strange poem is carved on the wall of the embankment here. It is hard to spot. It is too low to the ground to be read without getting down on ones hands and knees. Nearby are four slots one inch wide by three inches deep– two on each side of the poem.

(((From the field, four keys be cut one cross, one star,{br} To protect us from terrors a’ coming from afar.)))

Keyholes – perhaps a secret entrance to the old Roman wells? We don’t have any huge keys, however.

Another fifteen minutes of searching yields no new clues.

Suddenly, we hear a scream – which is quickly muffled – from the Madhouse. Looking up, a single candle is burning in an iron-barred window on the ground floors – a patient room no doubt.

Moving quickly, we jump off the embankment running across the muddy field towards the Madhouse. Suddenly, the earth begins to roil about us – and giant toads – eight feet in diameter burst from the ground. We form a protective circle and everyone opens fire. The quiet of the night is cut with enough gunfire that it sounds as if a small invasion has started. Once I get past the shock and horror of seeing a small garden animal grown to grotesque proportions, I am able to help in the fight. A long tongue wraps around my leg pulling me down – to my great fortune, Deasy is there with a long knife to cut me free.

Lying on the ground I look beyond the toads to see a monster behind the toads - standing almost seven feet tall, this fiend's armored flesh is scaly and moist. Its large, toothy mouth gapes below a pair of hungry, reptilian eyes. It is clearly intelligent.

My mind shuts down, and I pass out.

How long the fight took I don't know - I awoke as my companions are carrying me off towards the Lambeth Bridge and our waiting cab. The madhouse is dark again. I ask about the reptilian monster, but it seems that I was the only one who saw it in the dark. The toads eventually retreated from the gunfire, but signs of additional disturbances in the mud prompted our retreat from the Albert Embankment.

Tomorrow, we will investigate during the daylight. For now, the Baring House and some sleep.