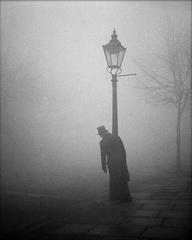 From the notebook of Thaddeus Royce, Baring House investigator:

18 March 1892 – 10:00pm – The people at the Windmill Pub are spooked – several patrons commented on seeing a strange inky blackness on the Thames the night of the 17th. Several knew of the victims – although the five made no untoward discussions and seemed to be convivial in their comradeship. All five left together at 11:00pm on the night of the murder – which the barkeep, Lionel Sampson, said was odd, as the five usually shut the place down. He thinks that missing man was named Frederick, although he never caught a surname.

18 March 1892 – 10:30pm - I am jotting this note as I ride towards Fishbone Alley – just across the Lambeth Bridge. After leaving the Windmill Pub on my way back to Baring House, I narrowly escaped a most dreadful accident. A runaway carriage came barreling down the street outside the pub – I can’t imagine why I didn’t hear its approach. Perhaps my coat was pulled too tightly against the rain.

Suddenly, a man – I say a man, although he was more shadow than substance – appeared from the shadows and pulled me to safety. The fellow had an odd accent, rough French tainted by an affinity for colloquialisms. He told me that the cult I sought was indeed the Followers of Saint Toad – a ludicrous name, but from his countenance I dared not jest. I asked how he knew my business, but he only smiled.

Then, he handed me eight vials of liquid and told me to drink one before seeing a man named Rankin in Fishbone Alley. It seems that Rankin is recruiting for the Followers tonight – and I could gain firsthand knowledge of their dealings – a mole of sorts. Then, as if reading my mind, the stranger had me shuffle and hand him a vial at random - which he drank with no apparent ill effects. Suddenly, he looked right as if distracted by an odd noise – pulling my gaze away, my heart raced for fear that another carriage was coming – and when I looked back, the man was gone.

So, here I sit in a Hansom going over the Lambeth Bridge about to confront the cult of Saint Toad. Seven vials are in my pocket – a sense of dread is washing over me. The night is unnaturally dark – or perhaps it reflects my mood – even the lights from Vulliamy’s sturgeon lamps that dot the embankment seem dim.