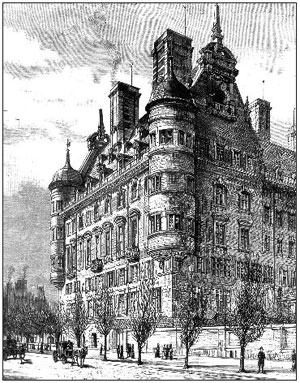 Scotland Yard is a metonym for the headquarters of the Metropolitan Police Service of London.

The Metropolitan Police was formed by Home Secretary Sir Robert Peel with the implementation of the Metropolitan Police Act, passed by Parliament in 1829. Peel, with the help of Eugène-François Vidocq, selected the original site at 4 Whitehall Place for the new police headquarters. The first two Commissioners, Charles Rowan and Richard Mayne, along with various police officers and staff, occupied the building. Previously a private house, 4 Whitehall Place backed onto a street called Great Scotland Yard.

On 30 May 1884, during the Fenian bombing campaign of 1883 to 1885, an anonymous letter was sent threatening to bomb Scotland Yard and all other government buildings in Central London. On the night of 30 May an explosive device was placed on a urinal outside Scotland Yard, and later detonated causing severe damage to the CID and Special Irish Branch offices. Later the same night another bomb exploded outside a club in what used to be Sir Watkin Wynn's house, and another was found placed at Nelson's Column.

By 1887, The Met headquarters had expanded from 4 Whitehall Place into several neighboring addresses and stables. Eventually, the service outgrew its original site, and new headquarters were built on the Victoria Embankment, overlooking the River Thames. In 1888, during the construction of the new building, workers discovered the dismembered torso of a female; the case, known as the "Whitehall Mystery", has never been solved. In 1890, police headquarters moved to the new location, which was named New Scotland Yard.

This red and white brick Victorian Gothic building designed by Norman Shaw was located on Victoria Embankment, SW1 adjacent to Cannon Row police station and built specifically to be the new Police Headquarters.

From the notes of Dr. Clive James: "We were led to the Booking Room - a large room is filled with dozens of desks, and the bustle of a major metropolitan police force. Around the perimeter of the room, a number of offices have windows facing inward. One wall has exterior windows letting in sunlight. The headquarters is littered with papers and debris. The Private Rooms were small with a table with six chairs around the perimeter. It is very quiet in these rooms. A picture of Sir Edward Bradford, Commissioner hangs on the wall."

According to internal documents, the following notes have been compiled concerning the officers of Scotland Yard.

Sir Robert Anderson - Assistant Commissioner of Crime – London Metropolitan Police, Criminal Investigation Department. Anderson is the primary contact between the King of Clubs and the Yard. Anderson worked on the Jack the Ripper murders in 1887. An unassuming man in his mid-50’s, Anderson is very religious with thinning brown hair streaked with grey.

Detective Inspector James Smythe - A principal investigator of "strange crimes" in London for Scotland Yard and the foremost Crown expert on the Haunting Hand. A quiet man with a stern continence, Smythe is of average build and appears to be in his mid-forties. He is rugged looking with brown hair and blue eyes. He has a scar on his face from a sword – wielded by Rufus Gladstone – his arch-enemy. Smythe assisted the King of Club on the case at the Monkshood Estate.

Inspector Xavier Hillman - An inspector in the Highgate area of London. Hillman is heavy set and middle-aged with slightly drooping eyes. Hillman was assigned to the affair at the Piper Estate.

Inspector Frank Strawbridge - An inspector in the Victoria area of London. A man in his early forties, Strawbridge has deep circles under his eyes and a nervous demeanor about him. Strawbridge was the lead investigator in the Jonathan Drake murder.

Inspector William Watts - An inspector in the Highgate area of London. Watts is a heavy set young man with wild brown hair and muttonchops. Watts was assigned to the affair at the Piper Estate.

Constable John Bailey – The constable in Tutbury. Baily is a smiling young man who is always polite with an engaging smile and bright white teeth. He is blond haired, tall and athletic. Described by others as somewhat clueless, he was promoted to Constable of Tutbury upon the death of Constable Robert White.

Constable Frank Dobeski - A constable in the Victoria area of London. Dobeski is in his early 40's with brown hair and unremarkable features. Dobeski assisted Inspector Frank Strawbridge in the Jonathan Drake murder.

Constable Emmit Mathers – The constable in Bodmin. A thin, nervous man in his late 30’s with brown hair and eyes, Mathers speaks slowly as if trying to avoid mistakes. He assisted the King of Clubs in the affair at Bodmin Moor.

Constable Humphrey Salisbury - Deceased constable in the Victoria area of London. Humphrey was a big lout, farm raised and new to the city. He was in his early twenties. Salisbury was poisoned during the events at the Monkshood Estate and was then killed by cultists en route to the local hospital. Salisbury has been cleared of any wrong doing in the affair.

Sergeant George Garside - Deceased sergeant in the Dockside area of London. Garside was a take-charge sort – bull-necked and red faced - known for his temper and verbal fits. He was very tall, large and well-muscled. He was in his thirties. During the case at the Monkshood Estate, Garside was discovered as an agent of Gladstone. He had been assigned to watch Inspector Symthe. He never outwardly disobeyed the inspector, but he did obfuscate evidence to cover things up. He kept in contact with Gladstone about the Manor. He knew about the relics, the murder plot, etc. Garside was killed in a shootout at the Lower Shadwell Docks.

Constable Robert White – Deceased constable in Tutbury. White was an elderly man with a drooping white mustache. Investigations showed that he was in league with the Haunting Hand - presumably turned because of a gambling problem. He was very rude, and tried to waylay the investigation. White was killed in a shootout near the Hardwicke House.

Constable Henry Wickham - Deceased constable in the Docskide area of London. Wickham was rail thin, black hair and hawk-nosed. He was working to get into Gladstone’s organization. So, while he knew nothing, he was very obedient. He was in his early twenties. Implicated in the events at the Monkshood Estate, Wickham was killed in the sinking of the Christabel.