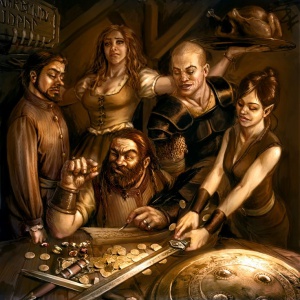 The Realm is a place of great diversity populated with every imaginable being from common peasants to strange, alien monsters. Most adventurers are drawn from the core races common to the Reaches. Uncommon race adventurers exist, but they face special challenges as outsiders - almost always drawing the attention of the local populace. Rare races rarely, if ever, join in adventuring parties.

Humans are, by far, the most common race in the Reaches. They can be found in almost every land and profession - from farmers of the vast plains to merchants on the Great Sea to woodsmen of the forests. Humans are some of the most powerful figures in the history of the Reaches. Also common to the Reaches are the two elder races. The elves are the great caretakers of the forest and land. In contrast, the dwarves are great miners and craftsmen of the mountains. Other common races include the "wee" folk - gnomes and hobbits. Gnomes tend towards magic and mechanical expertise preferring solitude in the marshes and swamps of the Reaches. Hobbits are farmers and hunters in the forest meadows and out-of-the-way pastures in the land. Finally, orcs from the north are found in the cities and towns of the Reaches working as adventurers - oftentimes as fighters, guards and hired muscle.

Uncommon races include goblins - tinkerers and spellcasters of the orcish clans that can sometimes be found in adventuring parties. Since the First Age, merchant ships have plied their trade across the Great Sea. The nimble ratfolk of the Tang Empire are the most powerful and accomplished sailors ever to set sail. While uncommon, a few ratfolk can be found in other occupations throughout the coastal towns and cities of the Reaches. More distrusted are the lizardfolk and kobolds from the Forbidden Lands far to the south. While common in the other lands of the Realm, lizardfolk and kobolds are uncommon in the Reaches.

Rarely found in the Reaches, the lost dwarves of the House of Calin are sometimes found in the smithys and forges in Teufeldorf. Likewise, the reclusive dark elves are almost never seen openly in the Reaches, although their missions from Dor Daeolith sometimes take them to the dark alleyways of the Western Reaches. To the east, the dhampir and werefolk of the Wolfshaunt have become more common in the Eastern Reaches of late. Finally, the demon-spawn tieflings - lost and without a homeland for centuries after coming from the Void - have been seen on the fringes of society.

The Realm is filled with other races - the great eagles of the Eyrie, the reclusive fey of the deep woods, the undead of the Tomb Kingdom, the dragons of the Wyrmwyld, and the merfolk and other aquatic races of the seas - to name a few. Other "monstrous" societies can be found tucked into the mountain crags and deep forest glens of the Realm. These small, isolated societies weave the very fabric of the land, but their members do not adventure in the Reaches. Most are reclusive by nature and hostile to any incursions into their domains.

The adventuring races in the Reaches are listed below.

NOTE: Three races use house rules for their creation and advancement. These races are: Brownies, Lizardfolk, and Lycan. See the House Rules page for full details.